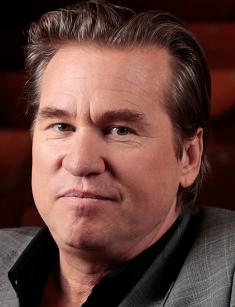 Val Kilmer is an outstanding American actor, loved by the Russian-speaking audience for the role of Batman in the film of the same name. However, there are no less vivid and memorable roles in the list of Kilmer. Val Kilmer was born in Los Angeles on December 31, 1959. The actor's full name is Val Edward Kilmer.

Val's mother ran the household and raised three sons and his father was engaged in real estate. After a failed contract, Kilmer's father lost family money and this fact may have been one of the reasons for the divorce of the Kilmer couple. The boy's parents divorced when he was nine years old. After the divorce, Val's mother moved with her sons to San Fernando but Val and his brothers continued to communicate with his father and often visited him in Los Angeles.

The biography of Val Kilmer is inextricably linked with the art of acting since childhood. Kilmer participated in theatre productions in his school years and then went to in New York, where he entered the Juilliard School's Drama Division. In 1977, there was trouble in the family of the boy, the younger brother of Kilmer drowned. He was 16 years old. This tragedy shocked Val. Later, the actor will tell reporters in an interview:

"You will never truly understand that love is life and life is love without understanding death. I'll never forget my brother Wesley."

The Juilliard School's Drama Division instilled in the novice actor a love for classical works. Richard III and Macbeth are among the early roles of Val Kilmer. In 1981, Kilmer became a member of the troupe of one of the theaters officially and began to play on Broadway two years later, in 1983. However, despite the success on the stage, Kilmer considered the theatrical career only as a temporary occupation. The main goal for him is a role in a movie.

The role of the singer Nick Rivers in the comedy Top Secret! became the first film work of Val Kilmer. The actor performs the songs of his hero in this film and even records an album after filming. At the end of the first shooting, Kilmer goes on a trip to the cities of Europe. Returning full of energy, the actor begins the next shooting. The second movie with the participation of Val Kilmer becomes the comedy. Real Genius brought to the actor success and love of fans.

A year later, in 1986, Kilmer was invited to the role of lieutenant in the film Top Gun. Val's partner on the set was Tom Cruise. This film, which tells about the pilots of military fighters, was a stunning success. Rental fees exceeded $ 350 million. In 1988, Val got a role in the story, Willow. The fairy tale happens for the actor on the set: Kilmer meets, who will soon agree to become the wife of Val. Val is removed with the lawful wife in the film Kill Me Again a year later.

The filmography of Val Kilmer continues to grow. The actor becomes recognizable and popular. However, as it turned out, the real success was waiting for the actor to come. This success was the role of Jim Morrison in the biographical film The Doors. Oliver Stone, the director of the film, looked at the casting of more than two hundred applicants and chose Val Kilmer among all the actors. The fact that Kilmer is similar to the legendary singer's appearance. Kilmer performs songs that sound in the movie as in the film Top Secret!. The actor was able to copy the voice and tone of Morrison and the band could not distinguish the original version from the singing of Kilmer.

Kilmer was injured on the set of The Doors. The actor had to jump from the stage to the hall. The jump was a failure and Val broke his arm. This film did not bring commercial success but the brilliant acting of Kilmer made him more popular. The next role of the actor was the legendary Batman in the movie Batman Forever. The critics will call this film the main in the career of Kilmer. This is the third movie, which tells about the adventures of the cult comic book character. The film was directed by Joel Schumacher, who replaced Tim Burton.

In 1995, Val Kilmer starred along with Robert DeNiro and Al Pacino in the film The Grey. The role of the offender gave him the MTV Movie Award for Most Desirable Male. The next bright work of Kilmer was the role in the film The Saint. Kilmer played a thief in this action movie, planning to steal the latest development but falls in love with a beautiful scientist and changes the original plan. It is no secret that this film had success due to Kilmer, who not only played brilliantly but also remade part of the script, adding his love scenes.

In the early 2000s, Val played mostly in militants and outlandish stories. The crime drama The Salton Sea was received by the fans of the actor and critics favorably. Another exciting role of Kilmer was Philip II of Macedon in the film Alexander. By the way, the actor proved to be a professional severe, having gained 44 lbs (twenty kilograms) of weight, especially for these shootings. Besides, Kilmer had to spend in the make-up chair an hour every day, Val was given unique make-up to make him look like an old man.

The actor had to get rid of extra pounds for the comedy Kiss Kiss, Bang Bang and he also managed. In 2006, the next films with the participation of Kilmer appeared: Moscow Zero, Déjà Vu, 10th & Wolf. The movie The Love Guru was released two years later and the movie The Bad Lieutenant: Port of Call - New Orleans was released in 2009.

In 2010, there was the film MacGruber in the filmography of the actor. This comedy tells the story of a rustic and silly but very charming agent MacGruber, who must save the world from the villain Dieter Von Cunth (who Kilmer played). His acting talent brought to Kilmer the Prism Award (for his role in the movie The Salton Sea) and the Satellite Awards (for the film Kiss Kiss, Bang Bang).

Tall, handsome Val Kilmer (height of the actor is 6 feet (1.83 m)) never complained about the lack of attention from the opposite sex. However, the personal life of Val Kilmer was not entirely happy. In 1984, Val was dating Cher.

In 1988, the actor married for the first time. Kilmer's chosen one was Joanne Whalley, an actress with whom Val met directly on the set. In 1991, the couple had a daughter and a son four years later. Unfortunately, the couple broke up soon after the birth of their son.

The next passion of the actor was the top model Cindy Crawford, whose relationship lasted two years. After this affair, Michelle Pfeiffer, Angelina Jolie, Drew Barrymore were among the lovers of Val.

There are rumors that the heart of a talented, handsome man is free again. Kilmer complained in an interview that he was bored with selfish beauties, who think only about themselves. Now Kilmer waits for a meeting with a "home" girl, who would love children and nature.

Val Kilmer lives on a ranch near the town of Santa Fe. The main thing for him is the upbringing of his children. Mercedes and Jack, the daughter and son of Kilmer, live with his mother, then his father, in turn. For the sake of this happiness, Val had to go through several court sessions: the court decided to transfer custody of the children only to his mother, the former wife of Kilmer, Joanne. By his admission, the actor fell in love with a quiet life away from the big city. Kilmer has two dogs, a cat and a buffalo and he takes care of them. Val Kilmer has a net worth of $25 million.

In 2016, fans were scared by the rumor that their idol Val Kilmer was dying of cancer. Kilmer's Instagram was filled with questions and comments from surviving fans. Kilmer himself for some time did not advertise the terrible disease but he found the strength to say. It turned out that the actor was diagnosed with cancer of the larynx.

Photos of Val Kilmer, which were changed because of a serious illness, shocked and upset loyal fans. There were even rumors that Val was to blame for not seeking medical attention in time. The fact is that the religious organization, in which Kilmer was involved, prohibits his adherents from resorting to the services of physicians, seeking help only to God.

In 2017, there was information that Kilmer managed to cope with the disease. And although the actor has difficulties in talking, Val Kilmer can be seen in a new film called The Snowman in 2017, a crime drama about the investigation of serial murders.