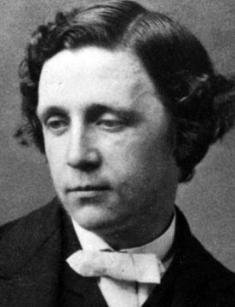 Lewis Carroll was born in Daresbury village in the English County of Cheshire, on January 27, 1832. His father was a priest, he was engaged in the education of Lewis, like his other children. There were four boys and seven girls in the Carroll family. Lewis showed himself enough smart and clever learner.

Carroll was left-handed, which was perceived by religious people in the nineteenth century not as calm as it is now. The boy was forbidden to write with his left hand and forced to use his right one, which caused psychological trauma and led to a slight stutter. Some researchers claim that Lewis Carroll had autism but there is no exact information about it.

Lewis began to study at a private grammar school, which was located near Richmond at the age of twelve. He liked the teachers and classmates, as well as the atmosphere in a small educational institution. However, in 1845, the boy was transferred to the fashionable private Rugby School, where great importance was attached to the physical training of boys and instilling in them Christian values.

Young Carroll liked this school much less but he studied at school well for four years and even demonstrated his excellent ability to theology and mathematics.

In 1850, the young man entered Christ Church, Oxford. In general, he did not study very well but still showed his outstanding mathematical ability. Lewis received a bachelor's degree and then began to read own lectures in mathematics in Christ Church a few years later. He did it for more than two and a half decades: his work as a lecturer brought Carroll a good income, although he found it very boring.

Since educational institutions were closely linked with religious organizations in those days, Lewis was obliged to take holy orders when he became a lecturer. He agreed to accept the rank of deacon, abandoning the authority of the priest in order not to work in the parish. Carroll began to write short stories and poems in the college and then he came up with this pseudonym (in fact, the real name of the writer is Charles Lutwidge Dodgson).

The creation of Alice

In 1856, the Dean of Christ Church was replaced. The philologist and lexicographer Henry Liddell came to Oxford to work in this position. He came together with his wife and five children. Lewis Carroll soon became friends with the Liddell family and became their faithful friend for many years. One of the daughters of a married couple, Alice, who was four years old in 1856, became the prototype of well-known Alice of the most famous works of Carroll.

The writer often told funny stories, characters and events which, he composed on the go the children of Henry Liddell. In 1862, young Alice Liddell asked Lewis to write an interesting story for her and her sisters Lorina and Edith once again during a boat trip. Carroll did it with pleasure and told the girls an exciting tale about the adventures of a little girl, who got through the hole of a White Rabbit in the Underground Country.

He made the main character like Alice's character and added some secondary characters, who look like Edith and Laura so that the girls were more interested in listening. Young Liddell was delighted with the story and demanded that the writer wrote it down on paper. Carroll did it only after a few reminders and solemnly handed Alice a manuscript entitled «Alice's Adventures Under Ground. » Later, he took this first story as the basis of his famous books.

Lewis Carroll wrote his cult works «Alice's Adventures in Wonderland» and «Alice Through the Looking Glass» in 1865 and 1871. His manner of writing was unlike any of the writer's styles that existed at that time. He was a very creative man with a fertile imagination and he was a distinguished mathematician with an excellent understanding of logic, so he created a unique genre of "paradoxical literature."

The characters and the situations are not intended to impress the reader with absurdity. They all follow a certain logic and this logic itself is brought to the point of absurdity. Lewis Carroll touches on many philosophical questions in a unique, sometimes even anecdotal form, he talks about life, the world and our place in it. As a result, the book turned out to be not only entertaining reading for children but also wise tales for adults.

The unique style of Carroll appears in his other works, although they were not as popular as the stories about Alice: «The Hunting of the Snark», «What the Tortoise said to Achilles,» «A Logical Paradox.»

Some people argue that Lewis Carroll and his world would not be so unusual if the writer hadn`t consumed opium on a regular basis (he suffered from severe migraines and stuttered quite noticeably). However, opium tincture was a popular cure for many diseases at that time. It was used even with slight headaches.

Contemporaries told us that the writer was "a man with quirks." He led an active social life but he suffered from the need to meet certain social expectations and wanted to return to childhood desperately, where everything was more comfortable and it was possible to remain himself in any situation at the same time. He even had insomnia and he spent all his free time on numerous studies. He believed in going beyond the known reality and tried to comprehend something more.

Charles Dodgson was indeed a gifted mathematician: perhaps that is why the riddles of his texts are so complex and diverse. He was often engaged in mathematical works when he did not write his masterpiece books. Of course, he was not so popular as Évariste Galois, Nikolai Lobachevsky or Bolyai János, however, he made discoveries in the field of mathematical logic, as noted by modern researchers.

Lewis Carroll developed his graphic technique to find solutions to logical problems, which was much more convenient than the diagrams, which were used in those days. Besides, the storyteller solved "sorites" masterfully, which were unique logical problems, consisting of a sequence of syllogisms, the removal of the conclusions of one of which becomes a prerequisite for the other one, all parcels in such a problem were mixed at the same time.

Photography was another serious hobby of the writer, from which he could only be distracted with his fairy tales and heroes. The manner of his performance of the photo belongs to the style of pictorialism, which is characterized by a staged way of filming and installation of negatives.

Lewis Carroll loved to take pictures children most of all. He was well acquainted with another famous photographer of those times, Oscar Rejlander. Oscar made one of the best portraits of the writer, who later became a classic of photography in the mid-1860s.

The writer led a very active social life. He was often seen in the society of various women. His family tried to explain to Lewis that it was necessary for him to hide the history of his torrid affairs, who did not want to settle down because he was a professor and a Deacon. Therefore, the story of his life was carefully retouched, after the death of Carroll: contemporaries tried to create an image of a kindly storyteller, who loved children. Subsequently, their desire played with the biography of Lewis a cruel joke.

Carroll loved children, he often communicated with little girls, the daughters of his friends and colleagues. Unfortunately, Carroll didn't find the woman he could marry and who would give him children. Therefore, in the 20th century, it was very fashionable to read the biographies of famous people and look for something strange in their behavior, the storyteller began to be accused of such a crime as pedophilia. Some people especially supporters of this idea even tried to prove that Lewis Carroll and Jack the Ripper are the same person.

There was no evidence of such theories. Moreover, all the letters and stories of his contemporaries, in which the writer exhibited a lover of little girls, were subsequently exposed. So, Ruth Gemmell said that the writer invited to visit "a shy child of, who was 12 years old", whereas the girl was at least 18 years old in reality at that time. There is the same situation with other alleged underage girlfriends of Carroll, who were adults.

The writer died on January 14, 1898; the cause of his death was pneumonia. His grave is located in Guildford, in the cemetery of the Mount Cemetery.