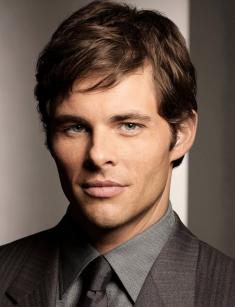 James Paul Marsden is American actor and model who gained world fame thanks to the role of Cyclops in the X-Men film series, as well as Neal Oliver in the thriller Interstate 60: Episodes of the Road.

Actor James Marsden grew up in a large family and had four siblings. The boy was born on September 18, 1973, in the provincial town of Stillwater, where he spent his childhood. James' father is a professor of animal sciences and industry, and his mother is a nutritionist. At first, the parents lived well, but then the family relationships fell apart. When Marsden was nine years old, the parents divorced. The father brought up the children.

After graduation from high school, the young man decided to study journalism and entered the faculty of broadcast journalism at Oklahoma State University. However, after studying for a few years, James Marsden became fascinated with an acting career and began to attend drama classes. The ambitious young man understood that he had more opportunities to pursue this career in Los Angeles. James packed and moved to the city, where he began a new period in his biography.

James Marsden was lucky. The tall (5.84 ft. (178 cm) man with a right appearance attracted the attention of the directors of the series The Nanny. The young man was offered to audition for the sitcom and was soon cast. The series was a successful start for James. By the age of 21, Marsden had already played in the film No Dessert Dad, till You Mow the Lawn, and by the age of 25, the man had often starred in TV shows.

These are Bella Mafia, Ally McBeal, Search and Rescue, Blossom. James portrayed the son of the title characters in the comedy No Dessert Dad, till You Mow the Lawn. In 1994, Marsden appeared in the family melodrama Party of Five about children who lost their parents in a car accident. James also joined the cast of the fantasy TV series Touched by an Angel. The actor could star in the horror The Outer Limits.

Marsden has also experienced failures during his acting career. James Marsden auditioned for the 1996 thriller Primal Fear which was a box office success, but it starred Edward Norton. Two years later James was not approved for the role of a bartender in Studio 54.

The drama Disturbing Behavior about troubled teenagers and the film Gossip became significant in the actor's life. In Gossip, James Marsden had to play a well-groomed rich man. The story tells about the meanness of students who spread a rumor about a girl. It spreads quickly, grows more and more detailed. James Marsden could show the character of the villain on the screen convincingly.

The actor became world-famous in 2000 when Marsden appeared as Cyclops in the successful project X-Men. James Caviezel was initially cast in this role, but he refused to shoot. Then the director approved James Marsden. The actor was lucky because his Cyclops appeared in all parts of the X-Men film series.

The next prominent movie was the thriller Interstate 60: Episodes of the Road, in which James portrayed Neal Oliver. Marsden’s hero fell in love with the woman that he had dreamt about, quitted his job, broke up with the bride, left the house, and went on a journey. He is confident that he will meet the woman of his dream at the end of the trip. After this role, critics and viewers started talking about the new talents of the actor.

James Marsden also starred in the drama The Notebook, the thriller The Box, the films Enchanted and Hairspray. In the last two projects, viewers could appreciate his comedic talent. In the 2000s, the actor’s filmography also included the TV series 30 Rock, Modern Family, Vietnam in HD.

Besides acting career, James does not refuse offers to shoot in commercials. In his youth, the actor was a Versace model.

Marsden is a handsome, young, in-demand actor, but James's personal life is not going well. In 2000, the young man married Lisa Linde, daughter of the famous singer, Dennis Linde. One year after the wedding, Lisa gave birth to a son, Jack, and four years later, their daughter Mary was born. In 2011, James Marsden’s wife filed for divorce, but the couple did not comment on the reasons.

Nevertheless, the actor keeps in touch with his kids. He has strong relationships with his oldest son Jack Holden, who is interested in music and plans to devote his life to it. In 2017, James and Jack appeared at the Screen Actors Guild Awards ceremony. Reporters noted their physical resemblance. James Marsden often posts photos of the 16-year-old teenager on his Instagram page.

There were rumors that the reason for the breakup was the actor’s love affair with model Rose Costa. Indeed, James and Brazilian Rose dated, and in December 2012, the young woman gave birth to their son William Luca. But instead of marrying, the couple broke up.

In 2014, the media reported that James Marsden dated the star of the series The Vampire Diaries, Nina Dobrev. In 2015, James Marsden found a new girlfriend, English model Suki Waterhouse, who was 18 years younger than the actor. The new relationship did not last long, and they soon separated. Nowadays, the heart of Hollywood actor James Marsden is free.

The actor's career continues to develop. Every year, Marsden appears in one or two TV series or films. In 2016, James starred in the highly-rated science fiction western Westworld which told about the amusement park of the future, where people have the opportunity to hunt humanoid androids. Marsden noted that training helped him look his best for naked laboratory moments or sex scenes as robot host Teddy Flood on Westworld. James Marsden’s partners on the set were Anthony Hopkins, Evan Rachel Wood, Thandie Newton.

In 2017, the actor starred in the sports comedy Tour de Pharmacy about the doping scandal during the international bike race. In September, the political thriller Shock and Awe with the participation of James Marsden premiered, which also starred Milla Jovovich.

Nowadays, the musical film Disenchanted is going through the post-production stage. In the movie, Amy Adams will play Princess Giselle from the magic world, and James Marsden will portray Prince Edward again.

In 2019, James Marsden has channeled Matthew McConaughey's character from Interstellar in humorous advertising to promote the return of Taco Bell's Nacho Fries.

James Marsden has a net worth of $8 million.