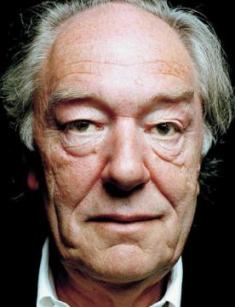 Michael John Gambon is an Irish actor, director, and writer who won Emmy and the Golden Globe. He began his career in 1965 and appeared in various movie genres.

The would-be artist was born in Dublin, Ireland, on October 19, 1940. The family had to move after the Second World war: the father was responsible for reconstruction in London. The boy attended a Catholic college, but he could not see the future there and skipped classes. To earn his living, Michael got hired as a toolmaker and gave his money to his parents.

The tall (6 feet or 183 cm.) young man found what he liked most: acting. He started his career at the Unity Theater troupe. However, Gambon had no professional skills and remained unknown; he believed it was not a good idea to become an artist.

Soon, Gambon entered St. Aloysius’ College to study engineering and receive a proper education. After graduation, he devoted himself to the stage and gladly accepted the offer of the Dublin troupe. He spent there three years and then continued to play at London groups.

Although Michael had a significant experience by that moment, 1981 is considered the beginning of his career. The British queen herself invited him to the royal theater.

It was a challenging way: four years after the theater opening, the young man did not dare to shine as bright as experienced and respectful professionals. At first, he received only minor and extra roles. While short phrases could hardly develop his talent to a large extent, the years in this environment were not wasted.

In a while, the administration noticed the ambitious actor and began to give him lead parts. His Othello or King Lear made the audience excited and turned him into a popular theater figure across the country.

In addition to the theater work, 25-year-old Michael debuted in the movie Othello. Although Laurence Olivier personified the protagonist, there was nothing to complain about. Soon, other directors invited Gambon to their projects.

Surprisingly, the actor was getting more and more recognizable with secondary parts; it was impossible not to notice his talent. For instance, the movie The Beast Must Die was memorable for a long time.

Sleepy Hollow was marked with the broader love of the audience. People of various ages were watching it all over the globe. The movie grossed $200 million and earned the Academy Award.

The tremendous success was followed by equally popular pictures. The drama The Cook, the Thief, His Wife & Her Lover was a breakthrough. Peter Greenaway himself invited the actor to the auditions, and it would be disrespectful to decline the offer.

Further on, the artist’s fans enjoyed his acting in The Life Aquatic with Steve Zissou, Layer Cake, and Amazing Grace. At 60, Gambon got the opportunity to appear in Harry Potter.

The project brought more aesthetic pleasure than money and fame, but Michael played in several seasons of the fantasy.

He took the role of his predecessor, Richard Harris, the genius director and actor who had been working on numerous movies and gained many prizes. As he passed away, senior-aged Gambon personified the kind, old professor. Dumbledore became children’s favorite worldwide.

Michael did not enjoy personal happiness at once. He married his first wife, the British actress Anne Miller, at the age of 22. In 1967, their son Fergus was born. Despite 50 years of their life together, the spouses divorced.

In 2000, the actor’s colleague Philippa Hart became his partner; they co-starred in Gosford Park. Three years later, the woman gave birth to the son named after his father.

Overall, Michael Gambon has participated in more than 50 projects. The international recognition came to him only when he reached a senior age. The actor appreciates every opportunity to play and sees it as the last chance.

The artist likes to communicate with his colleagues; he is always ready to help. The actor Ian McKellen is his friend.