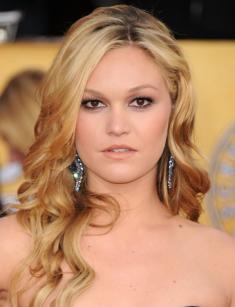 Julia O'Hara Stiles is an American actress, the star of the films Down to You, Out of the Dark, and The Omen. In 2006, she made her debut as a director, making the short film Raving.

Julia was born in the early 1980s in New York City. At that time, her father, John O'Hara, was an elementary teacher, and her mother, Judith Stiles, was a freelance artist and sculptor. Julia became the first child in the family. She has younger siblings: sister Jane and brother Johnny.

The young girl was fascinated by dancing, and her parents enrolled Julia in a contemporary dance school. Later, Stiles became interested in the plays of William Shakespeare, which led the girl to the theater group. At the age of 11, Julia made her stage debut in the production of the experimental La MaMa Theatre Company.

As a teenager, the girl continued to play in the theater and even appeared in TV shows, but Stiles also loved books and entered Columbia University to study English literature. Julia earned a bachelor's degree.

After graduation from the University, Stiles began acting in adult performances and appeared in commercials several times. The representatives of a film company noticed the young woman and invited her to audition.

Julia Stiles made her screen debut when she was only 12 years old. The girl received a role in the children's TV series Ghostwriter, after which she played in several similar projects. She made a feature film debut in the thriller The Devil's Own, in which the actress starred with Harrison Ford and Brad Pitt.

Julia is an admirer of Shakespeare, and she was lucky to participate in three screen adaptations of the dramatist’s plays. She appeared in the romantic story 10 Things I Hate About You, which is a loose modernization of the comedy The Taming of the Shrew, O, a modern adaptation of Othello, and Hamlet, based on the play of the same name.

The actress first rose to fame playing in the comedy Down to You, in which she co-starred with actors Freddie Prinze Jr., Selma Blair, and Ashton Kutcher. This work was followed by other films, including the horror film Out of the Dark and the popular thriller The Omen. The shooting in the last movie influenced Julia Stiles so much that it caused paranoia. Stiles began to fear that a chandelier would fall out of the ceiling at the hotel, which put hotel owners to trouble.

At the turn of the century, the actress’s filmography included a number of projects: the comedy State and Main, the drama Save the Last Dance, and others. The woman played a secondary role in three parts of the thriller about the former CIA agent, Jason Bourne (Matt Damon). In 2003, the actress starred in the light comedy A Guy Thing, alongside Jason Lee and Selma Blair, and the melodrama Carolina about a successful woman who was unhappy with her personal life.

The most significant project of the year was the feature film Mona Lisa Smile, in which Julia Stiles played with Julia Roberts and Kirsten Dunst. The film tells about the birth of the feminist movement in the United States.

A year later, Stiles’s filmography included the melodrama The Prince and Me, in which Luke Mably played Prince Edvard who fell in love with Julia's heroine. In 2008, the drama film Gospel Hill was released, in which the actress landed a title role. The next work was the thriller The Cry of the Owl, in which she played a young woman who had a boyfriend whose jealousy turned into paranoia.

In 2010, the actress had the opportunity to play in the TV series Dexter, and Julia was nominated for the Primetime Emmy and Golden Globe Awards for the role of Lumen Ann Pierce.

In 2007, Julia could experience the view from the other side of the camera. She wrote the script and shot the short film Raving about a chance encounter of a young woman and a single man on the streets of New York City. Zooey Deschanel and Bill Irwin played the leading roles in the film.

In 2012, Julia Stiles was at the peak of her career. The actress received an invitation to eight projects at once, including the TV series Jan, Blue, The Mindy Project, Midnight Sun. The actress appeared in the highly rated movie Silver Linings Playbook, in which Bradley Cooper and Jennifer Lawrence portrayed the title characters. Julia played a secondary role in the comedy Girl Most Likely and appeared as a spoiled rich girl in the drama Between Us.

The actress can brilliantly play in films of various genres, which she proved acting in the thriller Closed Circuit, the black comedy Hits, the horror film Out of the Dark. In the family comedy The Great Gilly Hopkins, Julia appeared as the mother of the girl, whom everyone considered to be a troubled child.

In 2015, Julia played together with Anthony Hopkins in the psychological thriller Blackway, which told about the young woman who was harassed by a local man who turned out to be a criminal. The same year, she starred in the drama Beyond Deceit, in which Josh Duhamel and Al Pacino joined the main cast. At the same time, the actress appeared in the television film Guilt by Association and the crime film 11:55.

Julia Stiles has appeared in several nude scenes, as well as there are hot bikini photos on the Internet that depict the actress’s beautiful figure.

Julia Stiles has dated a lot of famous men. The young woman had a relationship with colleagues Josh Hartnett, Joseph Gordon-Levitt, Heath Ledger, Jonathan Kramer. These were mostly brief and insignificant flings. The actress had a long-term relationship with American David Harbour, but they also broke up after four years of dating.

Julia met camera assistant Preston J. Cook on the set of the thriller Blackway. The young people began dating, and on January 3, 2016, they officially announced their engagement. Preston made a marriage proposal to his sweetheart on Christmas Eve during a vacation in Isla Grande, Colombia.

The actress is an avid fan of sports teams from her native city. Julia supports the New York Red Bulls soccer club and the New York Mets baseball club. On May 29, 2006, the actress was even invited to the opening match of the season and threw the ceremonial first pitch.

Stiles had refused to eat meat and been a vegetarian before. But later, Julia gave up veganism because the young woman developed anemia, and the doctors forbade such a diet.

In June 2017, the actress became pregnant, and at the end of September, Preston J. Cook and Julia Stiles became husband and wife. The actress had not told about her personal life before, but she wrote about the marriage and the birth of a child on her Instagram page. The photo depicting the baby’s palm appeared on the official page of the actress in November 2017.

Pregnancy did not prevent the actress from appearing in the TV series Riviera, in which Julia played a leading role. The husband of Julia’s heroine is killed by his business partners, and the woman realizes that she must fend off the criminals. Now, Stiles is taking care of her son, but the actress also plans to shoot in the movies Seconds of Pleasure and Five Minutes to Live.

Julia Stiles has a net worth of $12 million.