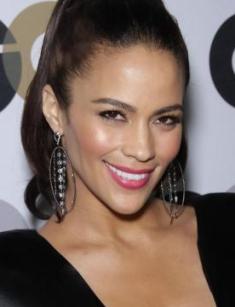 The future artist was born in Los Angles into the family that had nothing to do with cinematography: the father, Charles Patton, worked as a lawyer, and the mother, Joyce Vanraden, was a school teacher. The girl’s exotic look was the result of the mixture background.

The parents instilled the love of studies in their daughter: Patton loved to learn new things, and Literature was her favorite subject. Besides, the family lived close to the iconic 20th Century Fox studio, and little Paula went there for an excursion several times. Soon, the teenager began to participate in school performances and attended an amateurish theater studio. As a high-school student, Patton continued to master her acting skills at the Hamilton Magnet Arts School.

The parents persuaded the young woman to choose Humanities; she entered the University of California, Berkeley, to study English and Literature but spent only a year there. Further on, Patton transferred to the University of Southern California's Film School and put herself in the atmosphere of movies and plays.

Three months after graduation, the young professional got hired as an assistant to a documentary director on Discovery; although it was not about acting, Paula saw it as a lucky opportunity. At the same time, she worked as a songwriter and created some tracks for Usher’s album Confessions; collaborations with other authors followed.

Paula Patton debuted as an actress in 2005 and co-starred with top artists in her first projects. For example, Will Smith was her stage partner in the comedy Hitch, and Denzel Washington participated in the thriller Déjà Vu. The tragicomedy Swing Vote brought the collaboration with Kevin Costner.

The musical comedy melodrama Idlewild marked the first lead part: Paula personified a famous actress who accidentally visited a boring provincial town Idlewild, where nothing exciting usually happened. This experience was enough to gain another invitation to play one of the main characters in the horror Mirrors, a loose remake of the Korean movie Into the Mirror. Patton played the wife of the protagonist, who had to stand against a terrible demon moving within mirrors.

Besides, one could see Paula as the fiancée Sabrina Watson in the romcom Jumping the Broom. As the story runs, a social drama about class differences is pictured: the lovers belong to different social layers. As a result, many conflicts occur with their relatives.

In 2011, the actress could boast a gem in her filmography: she collaborated with Tom Cruise in another part of the iconic blockbuster Mission: Impossible – Ghost Protocol. Another lead part came with the comedy action 2 Guns starring Mark Wahlberg and Denzel Washington. It is a story about a police officer and intelligence agent who work undercover in a drug gang until their new task stitches them up: both the mafia and the CIA want them.

In 2016, fans enjoyed their favorite’s acting in the comedy action The Do-Over. Everything begins as a comedy about two school friends’ weekend: they are going to start a new life. However, the story turns out to be a spy plot: the primary and secondary characters switch, and new scenes reveal interesting details about their past. Thus, all previous words prove to be lies. Paula Patton’s character seems to be a hapless widow and meets the owner of her deceased husband’s personality; later, the audience can see she is involved in some crimes far worse than stealing a dead man’s body from a mortuary.

Today, Paula Patton’s most famous role is a half-orc woman Garona Halforcen in the beautiful fantasy Warcraft. The movie is set in the imaginary universe based on the game series by Blizzard Entertainment. The events on the screen have much in common with the games: the orcs’ homeworld is destroyed by demonic magic, and they have to flee to another place through a magic portal. The opposition between the orcs and humans begins; these two sides are named Horde and Alliance.

The actors Travis Fimmel, Ben Foster, and Dominic Cooper became Paula’s stage partners. Although Garona Halforcen from Horde does not belong to the ruling families, the king of the humans asks her to swear she will do everything to restore peace between two races.

It took Patton a little more than a month to work on her character, including the voicing. In comparison, the cutting and special effects took about 20 months.

The movie creators were promoting Warcraft in the geek community; new trailers, extracts from the movie, and character and location concepts were shown in the largest geek festival, Comic Con, San Diego, for three years in a row. The premiere was held in May 2016, but critics’ reviews were mostly negative. It was pretty illustrative: movies based on computer and video games were destined to fail. Despite unfavorable opinions, Warcraft became the most successful project in this category; it was the first and only project based on a video game that grossed more than $400 million.

Paula began to date Robin Thicke when she was a school student; later, Thicke became a popular singer and composer. Although Patton was several years older than her boyfriend, the lovers found common ground quickly and spent a lot of time together; they were gladly talking about their plans.

The couple married officially in 2005 and divorced ten years later. Even the baby son Julian Fuego (born in 2010) did not save the marriage. Rumors had it the celebrities broke up because of Robin cheated on his wife with the British musician Lana Scolaro. Apart from that, the woman has no kids.

The actress has a verified Instagram account; more than 300 000 people follow her there. She shares both professional studio photos and moments from walks, workout, or friendly meetings. There are also pictures from a movie set.

In 2017, Patton received the lead part in the ABC’s drama series Somewhere Between based on the South-Korean series God’s Gift: 14 Days. The woman’s character, Laura Price, suddenly finds herself in a time loop and goes through the horrible day when her daughter Serena is murdered. Laura begins to connect the facts and investigates how to live this day to prevent the tragedy.

In 2018, the audience welcomed another project with the actress, the thriller Traffik. A couple goes to the mountains for a romantic trip, but a group of sex slave traders attacks them; the travelers have nothing to do but to fight their enemies.

Paula Patton’s net worth is estimated at $9 million in 2019.