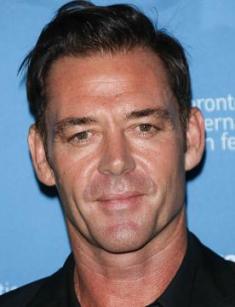 Marton Csokas was born in the town of Invercargill, New Zealand. The actor’s father, Márton Csókás I, is a Hungarian who immigrated to New Zealand after World War II. He worked as a mechanical engineer. In Hungary, he studied opera and at the same time worked as an acrobat in a Hungarian circus. The actor’s mother has English, Irish and Danish ancestry, and works as a nurse.

Csokas studied at King's College in Auckland. In 1989, he graduated from New Zealand’s drama school, Toi Whakaari, and in 1990, he made his debut on the theater stage in Wellington.

Csokas’s most notable roles in the theatre are Septimus Hodge in the play Arcadia by Tom Stoppard, Brutus in Julia Caesar, as well as characters in the productions of Peribáñez y el Comendador de Ocaña and Who's Afraid of Virginia Woolf?.

It is known that the eminent actor has been obsessed with traveling since childhood. After graduating from Toi Whakaari, he traveled around Europe for a couple of months, staying at cheap hostels and train stations. Marton admitted in an interview that he went to Hollywood not to become famous, but to get the opportunity to travel the world in a short period of time.

As a result, his dream came true. At various times films with his participation were shot in the Czech Republic, Morocco, Spain, and Germany. Nowadays, the actor holds dual New Zealand and Hungarian citizenship, and he is also a frequent guest in the USA.

The role of a maniac in the Australian TV show G.P., broadcast from 1989 to 1996, earned the novice actor the BAFTA Award and offered the opportunity to participate in nine episodes of the New Zealand TV series Xena: Warrior Princess, in which Lucy Lawless portrayed the title character.

It was followed by the shooting in Ridley Scott’s film Kingdom of Heaven and Paul Greengrass’s movie The Bourne Supremacy. However, the actor became famous portraying Lord Celeborn in Peter Jackson's trilogy The Lord of the Rings.

Abraham Lincoln: Vampire Hunter directed by Timur Bekmambetov and produced by Tim Burton premiered in June 2012. The movie, based on the novel of the same name by Seth Grahame-Smith, also starred Benjamin Walker, Mary Elizabeth Winstead, and Dominic Cooper.

In 2014, the actor's filmography included the films Sin City: A Dame to Kill For, Noah, and The Amazing Spider-Man 2.

2015 was marked by the premiere of the mini-series Sons of Liberty, which showed the period when the USA was British North America. In this film, Marton portrayed British General Thomas Gage.

In November of the same year, the TV series Into the Badlands premiered on AMC. It is known that the film was based on the Chinese classic fairytale "Journey to the West," telling the story of a warrior and a boy who were seeking enlightenment in the post-apocalyptic world.

In March 2016, AMC renewed the series for the second season, and in April 2017, it was announced that the project would be continued. The new season will consist of 16 episodes.

In 2016, Jeff Nicholson's drama Loving was released. The film tells about the spouses who have been sentenced to prison because they broke the state laws prohibiting interracial marriage. The story, in which Marton portrayed Sheriff Brooks, takes inspiration from the famous 1967 civil rights case Loving v. Virginia.

There is little information about Csokas’s personal life on the Internet. It is only known that from 2005 to 2009, the actor dated the "Hollywood witch," French actress Eva Green, whom the man met on the set of the film Kingdom of Heaven.

According to the actress, their relationship ended because Marton experienced mood swings too often. The beautiful brunette put up with the whims and nerve storms of her boyfriend for four years, but in the end, her patience ran out, and the lovers broke up.

In April 2017, the drama thriller Voice from the Stone was released. The film is the adaptation of the book of the same name by the writer Silvio Raffo. It tells about nurse Verena (Emilia Clarke) who takes care of the son of 40-year-old widower Klaus (Marton Csokas) because the boy hasn't spoken since his mother died unexpectedly.

It turned out that Jacob gave a promise to the dying mother to remain silent until her spirit returns. Verena understands that the mother’s soul will not leave this world in peace until she reunites with her beloved child.

It is known that Csokas also plays in various theater productions and performs on Broadway. So, in October of this year, in a Broadway production of The Parisian Woman, Marton played together with actress Uma Thurman who later posted a photo on Instagram, depicting the entire cast.

It is worth mentioning that the content related to the actor’s career and life is periodically published on various Internet portals and in print media. So, anyone can find out the latest news about the life of the Hollywood star.

Marton Csokas has a net worth of $4 million.