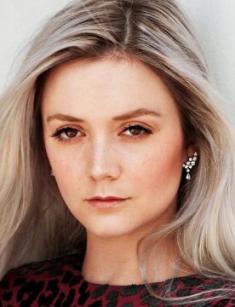 The American actress Billie Lourd earned her fame for the black comedy Scream Queens where she personified Chanel #3. The new Star Wars trilogy strengthened the artist’s success, and she is one of the most promising young talents in Hollywood today.

Billie Catherine Lourd was born in summer 1992 in the heart of cinematography, Los Angeles. The girl grew up in a famous, artistic family where two generations devoted their lives to the American show business.

The girl’s grandmother, Debbie Reynolds, was a singer and actress; she won the Jean Hersholt Humanitarian Award in 2015. Her grandfather, Eddie Fisher, came from Russian Jewish migrants, who changed their second name Tisch in the United States, and earned his popularity as a singer.

Billie’s parents were no less starry: the mother, Carrie Fisher, played Princess Leia in the iconic Star Wars franchise; the father, Bryan Lourd, worked as a theater and movie agent. The woman has a mixed origin: English, Scottish, Irish, and Russian roots. Her uncles and aunts are also connected with acting and music.

There is no wonder that young Lourd dreamed of performing on the stage. Although wise and experienced Debbie Reynolds asked Carrie not to let the girl go to the show business, the attempts were futile. In 2014, Billie graduated from New York University, where she studied Religion and Psychology, but did not exercise her profession and followed up her famous acting dynasty.

Summer 2014 brought the debuting role for 22-year-old Billie: she was invited to the seventh episode of the space saga Star Wars. Rumors had it that the artist would play young Princess Leia, just like her mother had, but they were not proven: the actress received the role of Lieutenant Connix.

The premiere of Star Wars: The Force Awakens was held at the end of 2015 in Los Angeles and London. The same year, the celebrity was invited to the slasher series Scream Queens; she personified a student Sadie Swenson, also known as Chanel #3. Emma Roberts and Jamie Lee Curtis starred in the project, but Billie did not look inconspicuous with these stars.

The comedy horror is full of references to iconic predecessors. In the episode “Pumpkin Patch”, Sadie offers to wear the costumes of murdered presidents’ widows. Chanel #3 gets dressed as Lucretia Garfield, while Roberts’s character becomes Jacqueline Kennedy.

At the end of 2015, Billie Lourd was offered the role of Rosanna Ricci in the youth drama Billionaire Boys Club by James Cox. It is a biopic about young frauds from Los Angeles. Billie collaborated with Emma Roberts once again; the movie also starred Kevin Spacey.

Billie Lourd used to date Taylor Lautner, the star of the vampire saga Twilight. Journalists noticed the couple together in December 2016. The couple met at the movie set of Scream Queens; the paparazzi caught them kissing soon and took photos.

Before that romance, Billie used to date some young man who did not belong to cinematography. The actress’s fan club on Twitter posted their picture together in October 2016, when the couple visited Drake’s concert. However, the artist did not talk about this affair. She avoided giving any comments on dating Taylor Lautner, although they shared some photos together on Instagram. Lautner used to date Selena Gomez, Taylor Swift, and Marie Avgeropoulos.

The end of 2016 was tragic for Billie: she lost her mother and grandmother within two days. When Carrie Fisher was going from Great Britain to the USA, she had a heart attack on board a plane; a neighboring passenger noticed she was not breathing and reported that to the crew. The man tried to help the actress before doctors’ arrival. Fisher was delivered to a hospital but died four days later; she was 60 years old.

Carrie’s 84-year-old mother could not stand the blow and died of extensive myocardial infarction the next day. The mother and the daughter were buried the same day. Billie’s boyfriend helped her survive the double tragedy; he did not leave her for a single minute. The couple was dating for eight months but split up eventually.

At some point, followers noticed the artists were no longer sharing pictures together on social networks. As close sources informed People magazine, Billie’s developing career caused the break-up.

In 2017, fans enjoyed their favorite’s talent in Star Wars: The Last Jedi and the series American Horror Story: Cult.

Ryan Murphy and Brad Falchuk’s fantastic thriller AHS brought the artist the lead role of Winter Anderson; Lourd collaborated with Sarah Paulson and Evan Peters. The seventh season of the project was premiered at the beginning of September 2017 on the cable channel FX.

In January 2017, the celebrity expressed her gratitude to fans who supported her after her mom’s and grandmother’s deaths. She posted a picture with the most important women in her life on Instagram and wrote:

“Receiving all of your prayers and kind words over the past week has given me strength during a time I thought strength could not exist. There are no words to express how much I will miss my Abadaba and my one and only Momby. Your love and support means the world to me”.

It was the first time the actress made an announcement after December 2016. Billie Lourd inherited her mother’s and grandmother’s fortune; her net worth is about $25 million in 2019.

Fans are looking forward to the actress’s new projects. Soon, the audience will see her as Lieutenant Connix in J. J. Abrams’s movie Star Wars: The Rise of Skywalker.