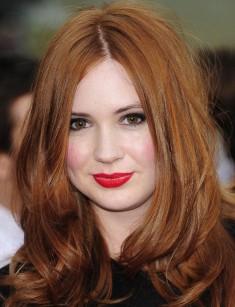 Karen Sheila Gillan is a Scottish actress who earned her fame for the role of Amy Pond in the TV series Doctor Who. The woman appeared in Selfie, In a Valley of Violence, and Alex & the List. The Marvel comics blockbusters Guardians of the Galaxy and the crossover with Avengers are among Gillan’s star projects as well.

Karen was born in the Scottish town, Inverness, into the family of the singer Raymond Gillan and his wife Marie Paterson. She was the only child and received a lot of attention and care. By seven, the girl could play the piano pretty well; she wanted to build a music career, just like her father. Later, Gillan took an interest in psychology, but the love of the stage turned out to be stronger than these hobbies.

As a teenager, Karen started giving performances at a youth theater club and school plays at Charleston Academy where she was high-schooled. Further on, the young woman entered Telford College, Edinburg. Two years later, she moved to London and took up acting classes at Italia Conti Academy of Theatre Arts.

To earn her living, Karen had to work part-time. Initially, she got hired at a pub. She was accepted to The Kevin Bishop Show and parodied Angelina Jolie, Katy Perry, and Julia Roberts.

When Karen began to work as an actress, she gave up this highly-paid job: from the first moment, the young woman dreamed of cinematography, not runways. In the course of time, another dream came true: she appeared at the theater stage and debuted as a secretary in the play Inadmissible Evidence. In 2013, Karen Gillan participated in the Broadway performance Time to Act.

The actress’s career was not developing rapidly. Karen Gillan debuted on the screen as a student and appeared in an episode of the series Rebus. The next two years brought not-so-popular projects. In 2008, Gillan auditioned for the role of Amy Pond in the popular series Doctor Who and succeeded.

Karen’s character was the primary companion of the Eleventh Doctor. The series began in 1963 and continued with breaks. The creators discovered the way to keep the consistency of the storyline: the main character fantastically regenerates which gives the opportunity to employ different actors for this role. Matt Smith played the Eleventh Doctor.

Karen Gillan appeared in the first episode of the fifth season, “The Eleventh Hour.” Amy Pond was engaged in many exciting and memorable situations and episodes of the new season (after a break). The role also brought the actress four prizes: Cosmopolitan's Ultimate Women of the Year Awards, SFX Awards, TV Choice Awards, and National Television Awards. At the same period, the artist voiced Amy Pond in computer games: Doctor Who: The Adventure Games, Doctor Who: Evacuation Earth, Doctor Who: Return to Earth, and Doctor Who: The Eternity Clock.

In one of the episodes, it was necessary to portray Amy Pond at the age of seven. Producers found Karen’s cousin, Caitlin Blackwood; she played this role. Surprisingly, Gillan did not know anything about her cousin: they had never met before.

The international fame brought by Doctor Who helped the actress gain new exciting roles. Gillan appeared in the British romantic comedy Not Another Happy Ending, the Hollywood horror Oculus, and the comedy Selfie based on the iconic music movie My Fair Lady. However, the favorable background did not make the latter project popular: because of the low ratings, it was closed after the first season.

The image of Nebula in the Marvel action movie Guardians of the Galaxy became one of Karen’s popular roles. For this project, the actress had to have her head shaven: she appeared bold. Besides, her character, the villain Nebula, was a villain, and the actress’s skin was painted blue.

The movie tells the story of the struggle for a powerful artifact between the heroes and villains. Five fugitives who had met in an intergalactic prison unite their forces as they realize that nobody except for them can protect the Infinity Gems and the universe from Thanos. The group calls themselves the Guardians of the Galaxy.

Nebula is Thanos’s adopted daughter and one of the antagonists. At the end of the first movie, this character is not defeated; thus, Karen could come back to this role in the movie sequels.

Rumors had it that Karen was seeing Matt Smith who took the lead role in Doctor Who: their screen relationship allegedly continued in real life. The actors do not deny or confirm these speculations; however, both of them said that the series made them close to each other.

The actress does not keep secret her sizes: her height is 178 cm., and her weight is 58 kg. The woman is sure she has no problems with her body.

Karen Gillan has her own Instagram page and posts funny stage pictures, photo sessions, and selfies. More than 2 million people follow her.

In 2016, Karen Gillan and John Travolta starred in the western In a Valley of Violence. In the light melodrama Alex & the List, Jennifer Morrison became her colleague.

Spring 2017 was marked with Guardians of the Galaxy Vol. 2 where Gillan played blue-skinned Nebula again. The movie’s box office was $863 million: it was the sixth top grossing project of that year. The story continues: Nebula stops being a pure villain and develops as a character.

In 2017, Karen played the lead role in the adventure fantastic movie Jumanji: Welcome to the Jungle, the sequel of Jumanji. In the new story, one can see teenagers play an old video game, not a board game. The main characters are the children’s avatars.

Karen’s image was criticized: she is the only woman among the main characters and the only person who is wearing sexy clothes ignoring the weather conditions. The story is set in the jungle, but Martha is wearing short shorts, and her hair is long; overall, it looks dangerous and illogical. However, some people explain it by the fact that it is a game avatar, and female characters are, unfortunately, often portrayed half or almost naked in video games.

In 2018, the actress appeared in the crossover Avengers: Infinity War. In 2020, she is expected to star in the third sequel, Guardians of the Galaxy Vol. 3. 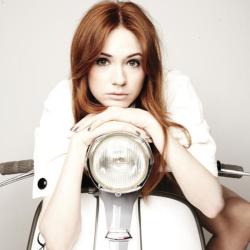