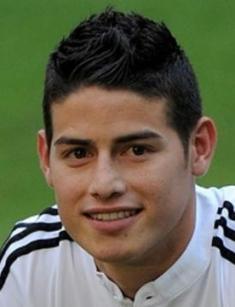 In 2014, James Rodríguez was recognized as the Person of the Year in his homeland for six goals at the FIFA World Cup. Few footballers have become the top scorers at their debut world cup. He is one of those players who succeeded. James Rodríguez has not only become one of the record holders of the Colombian national team but also joined the FIFA World Cup All-Star Team.

The brilliant strategic thinker who demonstrated his playing style and virtuoso technique gained a rightful place among the young football leaders of the world. At home, James’s fans do not doubt that the man will be as famous as the legend of Colombia, Carlos Valderrama.

James David Rodríguez Rubio was born in the town of Cúcuta, located on the border with Venezuela. His father, a professional football player, divorced his wife when his son was three years old. However, his stepfather is the one who deserves some credit for Rodríguez’s career choice. When Juan Restrepo noticed how the little stepson imitated the hero of the cartoon Captain Tsubasa, the man took the boy to the sports ground and gave a football.

Day by day, James improved the playing technique. To attract the attention of club managers to the child, his stepfather edited a video about the progress of the little football player, and at the age of 5, the boy enrolled in the football school.

James Rodríguez did not have time to study at school and improve the playing technique, but his parents accepted the boy’s priorities and took bad marks in a good sense. Cúcuta is the home of the football club of the same name, but James Rodríguez began the sports career at the Envigado club, where the Colombian made his debut at the age of 14.

Rodríguez has not graduated a university, although he entered the Department of Computer Science. The talented young man devoted all free time to football. James Rodríguez left his studies but promised to return to the university and get a degree.

The athlete scored his first professional goal at the age of 16. In the 2007 season, Envigado reached the Colombian first division. The promising player joined the youth team, for which James Rodríguez played in 11 matches.

In 2008, the Colombian player moved to the Argentine team, Banfield. In February 2009, he made the first team debut and scored the first goal against the oldest Argentinean team, Rosario Central.

Thousands of fans remembered Rodríguez who managed to break two records at once. James became the youngest foreigner to score a goal in Argentina and the youngest player who scored a goal in the tournament. James Rodríguez’s third record at Banfield is the goal that led the team to their first victory in the Argentine championship.

At the end of 2009, Rodríguez gained fame as the most promising football player in South America. Famous clubs in Europe and America became interested in the athlete. The Italian team was ready to pay $ 3 million for the man, but the Portuguese club was ahead of them. The Porto managers paid $ 5.1 million for the transfer of the Colombian for four years.

After two winning seasons that turned Rodríguez into the champion of Portugal, the French club Monaco announced the desire to pay a record sum for the transfer of the Colombian star. The club also bought his Portuguese colleague João Moutinho. Monaco was a runner-up in the Ligue 1. Rodríguez played for the club for one season but did not end it with trophies. However, he remained the leader of the team.

In the summer of 2014, James Rodríguez changed his team again. Real Madrid paid €80 million for the transfer of the midfielder. Under the contract, the player’s annual salary was €7 million until 2019. The football player did not achieve great victories, playing for the Spanish club and was overshadowed by his colleagues, which caused rumors that Rodríguez was going to leave Real Madrid.

In the summer of 2017, James Rodríguez was loaned to Bayern Munich on a two-year-long deal. The team had the option to buy James at the end of the loan period. James's salary in Bayern reached 6 million.

The Spanish club did not want to lose a promising athlete and suggested Rodríguez extend the previous contract until 2021 if Bayern refused to buy the player in 2019. Saying goodbye to the Spanish fans, James Rodríguez wrote on Twitter that he was proud to wear the club uniform for three years.

Fans remembered the Bayern midfielder for an epic simulation while playing against the South Korean national team. Rodríguez made spectators laugh, falling on the field after being hit by the Asian player, although the latter did not touch the player with the number 10 T-shirt.

In 2010, James Rodríguez married volleyball player Daniela Ospina, a sister of the goalkeeper of the Colombian football team. But David Ospina did not introduce his colleague to his sister. The couple had met before Rodríguez joined the national team. Daniela chose the family over a career in sports and went with her husband to Europe.

In the spring of 2013, James became a father when his wife gave birth to his daughter Salome. The joyful scorer has a tattoo on his arm depicting the name of the baby and kisses it every time he scores a goal.

The news about the couple’s divorce became a bolt from the blue for fans of James Rodríguez. The reason for the breakup was James’s love affair with Russian model Olga Korobitsyna, better known as Helga Lovekaty.

The large-breasted fitness model from St. Petersburg, whose pictures can be easily found on her Instagram page, allegedly stole the heart of the Colombian player at Cristiano Ronaldo’s party.

The model who works for the Mavrin Studio in St. Petersburg denies an affair with James Rodríguez, claiming that she is married and not even familiar with the football player.

Rumors spread on social media and in tabloids and had it that James Rodríguez and Helga Lovekaty met when Daniela left for Colombia, where she starred in a television project. The marriage with Daniela broke up, but it is still not clear whether Rodríguez had an affair with the Russian model or not. Although the couple separated, Ospina does not hamper the communication of the father with his daughter.

At the end of 2017, information appeared that James Rodríguez wanted to leave Bayern and return to Real Madrid. The football player feels alone in Munich, and he does not like its damp and cold climate. But what is more important, the Colombian does not like the German style of play.

The dismissal of coach Carlo Ancelotti, with whom James had a warm relationship, was the last straw that convinced him to leave the club. James Rodríguez has played in 5 matches for Bayern Munich; however, he still has to play there for 21 months.

James Rodríguez has a net worth of $30 million.