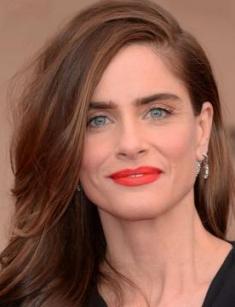 Amanda Peet is famous for her roles in films and on the theater stage. In the USA, the actress is also known as the author of children's books. However, the book, published in 2015, would hardly have attracted the interest of readers if it were not for the author's name, which became famous thanks to the comedies of the early 2000s.

The actress’s parents are not connected with the art world. The future actress was born in an ordinary family in New York City. Her father served as a lawyer in a small company. The mother was a social worker. The maternal great-grandfather was a famous theatrical impresario, but when Amanda was born, he had already died.

In 1979, the family went to London, where they lived for four years. Amanda was raised in the Quaker tradition. Her father was a member of the Society of Friends, and the mother is Jewish. Peet is an educated lady, and her knowledge is not limited to the world of cinema. The future actress studied American history at Columbia University. However, while studying at the university, she often thought about an acting career and attended auditions.

The first project in Peet's acting career is a commercial for Skittles. The girl earned a significant income for shooting in a simple video about chewing candies. But Amanda did not want to be the star of advertising, but a serious actress who took on diverse roles. Peet had to achieve her goal for a long time.

In 1992, Amanda played in one of the most popular TV shows of those years, but her name was not mentioned in the credits. Peet made her debut portraying Debbie in Animal Room in 1995. In November of the same year, the blue-eyed brown-haired woman appeared in the series Law & Order. Like many stars, Amanda gained the first experience appearing in low-budget films.

One day the heroine of Touch Me finds out that her ex-boyfriend has AIDS. Peet played the title role in the melodrama. However, the film did not become very popular. A few viewers remembered the young actress’s character in One Fine Day. In this movie, Amanda landed a secondary role again.

The first prominent project in Peet’s filmography is the role of Jacqueline Barrett in the TV series Jack & Jill which premiered on American television in 1999. The TV show was the beginning of the career of one more movie star, Sarah Paulson.

In 1999, they began shooting the film about the life and work of Jacqueline Susann, an author of the novel "Valley of the Dolls" which was the best-selling book of the 60s. The film was released under the title Isn't She Great. Bette Midler played the role of the writer. Peet got a minor character.

But soon she got a role in the crime comedy that made both the actress and her partners famous. However, Bruce Willis, who played a charming criminal in The Whole Nine Yards, had already been well-known in the USA and Europe by that time. Peet’s next project is the thriller Track Down, based on Kevin Mitnick’s life.

Film critics appreciated the acting of the 28-year-old actress. Directors began to invite Amanda more often, but, as a rule, they offered roles in comedy films. In the movie Saving Silverman, the actress portrayed a cynical femme fatale, an attractive young woman who easily manipulated men.

Since 2002, Peet has appeared not only in comedies and melodramas. Her filmography has included dramas and thrillers, and the most striking of them is Identity. In the film with a complicated plot and a tragic ending, Peet appeared as a former prostitute dreaming of a house in the country.

But the heroine's dreams do not come true because she dies, as well as the other heroes of Identity. Michael Cooney wrote the script, inspired by the novel "And Then There Were None," and therefore his characters did not stay alive. John Cusack played the title character, a former police officer, Ed.

In 2004, the continuation of The Whole Nine Yards was released. Peet’s heroine, who had dreamed of becoming a killer, already appeared as "the Tulip’s" (Bruce Willis) girlfriend in the second part. Neither critics nor viewers appreciated the sequel. The film scored 24 points out of 100 on Metacritic.

When they began shooting The Whole Ten Yards, Woody Allen invited Amanda to the movie Melinda and Melinda. The film is set in two storylines; one comic, one tragic.

In 2005, the actress played in the thriller Syriana which earned George Clooney the Academy Award. The woman had to combine shooting with theater performances. The film was praised by critics, winning four awards, including the Edgar Award for Best Motion Picture Screenplay. The actress played a minor role and did not win awards. Moreover, later, Peet was also not lucky to receive prizes. Her credentials include two awards, the Young Hollywood Award and the Independent Spirit Robert Altman Award in 2011.

Amanda Peet played the prominent role in the fantasy film 2012. The movie is based on an eschatological delusion about the end of the world.

In 2008, the actress joined a non-profit organization advocating childhood vaccination. She began working there becoming concerned by the amount of misinformation over vaccines in America. The actress said in an interview that the parents who did not vaccinate their children were parasites. Later, Peet had to apologize for using the term "parasites." However, the movie star affirmed her position on the importance and safety of vaccinations.

The actress married at the age of 34. Her husband is David Benioff, who also got married the first time. Peet met screenwriter and producer of Game of Thrones in the early 2000s. They dated for four years. Now the couple is raising three children. A year after the wedding, a girl was born. The happy parents named her Frances. In 2010, the actress gave birth to Molly. In 2014, the photos of pregnant Peet appeared on the pages of fashion magazines.

In December, the long-awaited son was born. The boy was named Henry. The children use the real surname of their father. Peet's husband was born David Friedman. The screenwriter took his mother's maiden name as his professional last name at the beginning of his career. Sarah Paulson and Peter Dinklage are the friends of the star of The Whole Nine Yards.

The actress and producer’s marriage is strong, which is rare in Hollywood. Journalists have tried to find compromising information about the couple, but everything was in vain. Peet joked in an interview that she would divorce Benioff because she didn’t like the plot twists he created in Game of Thrones. It seems that the famous family quarrels only about creative differences.

In April 2017, the first episode of Brockmire was released, in which Peet played a leading role. The project was successful. In 2018, the second season is expected to be released. Brockmire is the only project in which the actress is currently involved.

In 2015, Peet published a Christmas book. It is unknown whether she plans to continue writing books for children or not.

The actress, who celebrated her 45th birthday in 2017, looks as irresistible today as she did at the beginning of her career. However, she does not support cosmetic surgery. Unlike other Hollywood stars, Peet does not wage fight against aging, claiming that she emphasizes her independence of the opinion of others this way.

Amanda Peet has a net worth of $18 million.