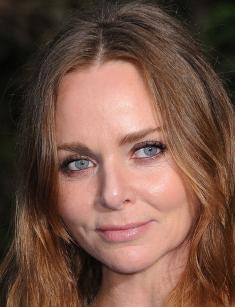 One of the most eccentric fashion designers in the world. Stella McCartney began her career in 1995 when the supermodel friends Naomi Campbell and Kate Moss showed Stella’s clothes on a runway. In 2000, the woman received the Vogue Designer of the Year Award. In 2012, she worked on the design of the British Olympic team’s uniform.

Stella Nina McCartney was born on September 13, 1971, in London. The girl was the second child of the former Beatles member Paul McCartney and his wife Linda. Although Stella was born soon after the group split up, her early childhood memories included the father’s busy schedule, album recording, and tours.

Paul participated in another group, Wings, along with Linda and the drummer Denny Seiwell. The children traveled with them: Stella, her brother James, sister Mary, and half-sister Heather (Linda’s daughter from the first marriage). By the way, the name of the group is connected with Stella. As Paul McCartney mentioned in his interviews, Linda’s childbirth was difficult, and doctors decided to give her a caesarian section. The man was praying near the surgery room and asked an angel to bring a healthy daughter on their wings.

After Wings broke up, the McCartney family moved to an organic farm in Sussex and began to grow up vegetables and breed cattle.

“The beliefs I was raised with – to respect animals and to be aware of nature, to understand that we share this planet with other creatures – have had a huge impact on me”, the woman told The Guardian in 2009.

Although Stella was born into a famous family, her childhood was quite ordinary. The family members’ relationship was warm; the children had no privileges and attended local schools with others. At the same time, the girl was daring and self-confident; she did not hesitate to express her opinions. As a result, she was involved in conflicts with peers sometimes.

Stella dreamed of becoming a fashion designer at 13 and took the first step soon: she designed a jacket.

At the age of 16, the young talent became a student and assistant of Christian Marie Marc Lacroix, the founder of a high fashion house. At that period, Christian was a beginner creating his first collection. Stella was not afraid of simple work, too: her father’s tailor taught her how to make dresses.

Stella McCartney entered the fashion industry in 1995 when she invited Naomi Campbell and Kate Moss to wear her clothes on her runway. It was something like McCartney’s thesis when she was finishing Central Saint Martins school in London. The designer’s show was accompanied by legendary Paul McCartney’s songs; it was a tremendous success, and people bought the clothes in London and Tokyo boutiques within days.

Two years later, McCartney was invited to Chloe as the head of the label; the German designer Karl Otto Lagerfeld used to be one. The master’s attitude toward Stella was skeptic, even slightly unfriendly. Nevertheless, the woman’s diligence brought Chloe much commercial success in Paris as well as critics’ approval.

The luxurious wedding dress for Madonna was a significant milestone in Stella’s career; the singer married the director Guy Ritchie.

The designer collaborated with Chloe for four years and left for Gucci. In 2002-2008, she opened four boutiques and sold original clothes. 2009 brought the store in the international fashion center, Paris.

In 2005, the brand released perfume products; the organic toiletry followed at the beginning of 2007.

Stella realized that the price politics of international brands made her clothes unavailable for the majority of the population. Soon, she presented a collection with the Swedish company H&M the number of the designer’s fans multiplied, and her products were sold quickly.

The woman’s career was not all about triumph. In 2007, Stella presented an exclusive collection for Australia; China was the producing country. Initially, women were queuing in stores to buy clothes, despite the high prices ($30 and more for a silk scarf).

Later on, clients returned most of the collection: disappointed people complained about the inadequate sizes. Thus, the line had to be sold at half-price.

The failure did not discourage the designer; on the contrary, it was a motivation. In 2008, Stella presented a sports and accessories collection for travelers; it was popular among the Americans. In 2009, the woman started producing children’s clothes with Disney.

In 2010, McCartney became the creative director of Adidas. It was an important step for her: the woman designed the uniform for the Olympic and Paralympic national teams in 2012 and introduced some innovations to the sports clothing construction.

Stella was close to her mother from early childhood. When Linda died of breast cancer in 1998, it was a severe blow for her.

In 2002, Paul McCartney married Heather Mills; Stella was furious. She even created a pendant shaped like a leg to mock at her father’s second wife who had lost a part of her leg in a car crash.

The designer’s private life has been peaceful. While celebrities often have many affairs and one or two kids, Stella was pretty scrupulous. She married the publisher Alasdhair Willis at 32.

Stella’s emotional connections to her mother manifested themselves in her wedding dress choice: the bride was wearing the dress similar to her mother’s; it was slightly improved.

Today, Stella McCartney continues to present new collections of men’s, women’s, and children’s clothes, as well as bags and accessories. One can find the designer’s products on her official website.

Stella McCartney protects the animals’ rights. She does not use skin and firs in her collections and replaces them with imitating eco-materials. Stella’s perfume and cosmetics consist of natural components; they are not tested on animals. However, the woman uses silk and wool.