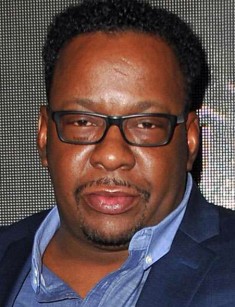 Bobby Brown is rightly considered to be one of the most famous performers in the world. His career had begun since his early age, and his biography is full with a great number of events. As a performer Bobby became famous in his youth, every year he becomes more and more popular.

Robert Barisford "Bobby" Brown was born on the 5th of February, 1969 in the State of Massachusetts, in Boston. His mother Carole Elizabeth worked as a teacher, and his father Herbert James was a builder, there were 6 children in his family.

In his youth, Bobby robbed shops and was involved in the gangs. When the guy was 11 years old, one of his friends had got stab wounds, the guy hadn't survived. This incident became crucial in Bobby’s life and had pushed him to redefine his life. The guy began to treat education seriously. James Brown was his idol since early age Bobby dreamed to become similar to him.

The musical career of the performer had begun in the boy band of "New Edition", the group sang songs in R&B style. With Bobby as a participant of the band such hits as "Candy Girl", "Cool It Now" and "Mr. Telephone Man", "Can You Stand the Rain" were recorded.

When the performer was 17 years old, he was excluded from the group as a result of the voting of the participants. They considered that the defiant behavior of Brown put the reputation of the band and the career of each of the members at risk.

In 1986 Bobby released his first solo album under the title "King of Stage". The "Girlfriend" song from this disk headed the Billboard chart among music in R'n'B style and took the 57th position in the main chart. If not considering this event, the debut disk hadn’t drawn attention to itself.

The second disc under the title "Don't Be Cruel" was released in 1988. With its release Bobby Brown became popular. The album became platinum 8 times, and more than 8 million copies were sold. This disk made the performer a really well-known person, in particular, because of his five compositions which got to the 10 best tracks according to the Billboard:

In 1989 the performer participated in the record of audio to the movie "Ghostbusters II". The released single under the title "On Our Own" took the second position in the main national charts. Bobby also had a small role in the above-mentioned movie.

For the development and fixing of the success, the publishers released several discs with the remixes on the most popular songs of Bobby Brown. The track with an unceasing mix and fragments of the "Snap!" band took the 14th position in the British charts. The album with the rhythm-and-blues version entered TOP-10 popular albums in Australia.

In 1992 the 3rd album of the performer was released and it occupied the 2nd line of the Billboard chart. The disc was sold in more than one million copies, but it hadn't managed to repeat the success of the previous album.

In 1997 one more album under the title "Forever" was released. Brown had settled such terms of the contract which provided him complete control over the creative component, he had composed all the songs on his own. As a result, the album received the 61st position in the charts, and none of the songs hadn’t entered the charts of the singles.

The relations of the performer are not less bright than his career. For the first time, Bobby became the father when he was 17 years old, his son Landon was born in 1986 from Melika Williams. From 1989 till 1991 the singer had been in relations with Kim Ward, in this family two children were born – a daughter La’Princia and a son Bobby Jr.

Bobby had the most exciting union with the singer Whitney Houston. Once the man had rushed into the make-up room to Whitney Houston, presented her flowers and began to kiss her. The decent woman hadn't estimated this trick, but Brown wasn’t in despair and after a while came to Whitney with a ring.

Later they had supper at the restaurant, and because of the waiter, the salt had fallen onto the singer’s dress. The waiter began to shake the salt from her dress, but jealous Bobby had beaten him. Whitney liked this reaction very much. After that, the man was beaten by the security guards of the restaurant where the couple had had supper.

In summer of 1992, Bobby Brown and Whitney Houston got married, there were 800 guests present at their celebration. It is the best-known ceremony, the wedding of the couple was called an event of the decade. Mother of Whitney dissuaded the girl from this wedding till the last moment. As for the father, he stood apart all the time, without approving the choice of his daughter. In a year their daughter Bobbi Kristina Brown was born.

During Whitney's shootings in the movie "Bodyguard", the journalists were talking about her love affair with Costner. Bobby made jealous scenes with a beating of ware and alcohol. Despite the similar violence, Brown could lead a rather quiet life for several months. There had hardly been no quarrels, Bobby raised a hand against Houston, he also could tell her to get out of the house. In 1997 the singer left Bobby. In a short time, Houston would release a new album and would begin to perform at the concerts.

During this period Bobby underwent treatment for alcoholism, tore all communications with his former girlfriends and again tried to court Whitney. She forgave her husband, and the couple was together again. The singer tried to forget the resumed quarrels and problems in her career with the help of drugs. She got some problems with her voice, Whitney began to be fond of drugs and refused to perform at the concerts. Bobby again raised his hand at his wife, returned to alcohol abuse and had extramarital affairs.

Once when he returned home he found Whitney unconscious. According to the words Bobby, at that moment he understood that nobody, except him, would be able to help Houston to get rid of her addictions. He supported his wife in every possible way, and already it seemed that she had recovered, but Whitney hadn’t given up her addictions.

In 2007 the marriage of Brown and Houston had finally broken up. The singer couldn’t bear Bobby's beating and his hard booze and numerous betrayals. After the divorce, the right of the guardianship over the daughter was granted to her mother as Brown had problems with the law and had an alcohol addiction.

In 2012, in February, Whitney Houston died in the hotel room. As a result of the police investigation, it became clear that there were several causes of her death: drowning, atherosclerotic heart trouble and use of cocaine. Whitney’s death became a great tragedy for Bobby and Kristina.

In June of the same year, Bobby Brown and Alicia Etheredge got married in Hawaii. By the words of the musician, Alicia helped him to recover after the divorce with Whitney Houston and to cope with his drug and alcohol addiction. The man made an official proposal to her during the concert in Jacksonville. All of the children of Bobby attended their wedding, except for Kristina Brown.

In July 2015 Bobby's daughter, Kristina, died after a six-month coma. Alcohol, cocaine, and morphine were detected in the girl's blood and on her body, there were found bruises and grazes. Later, her boyfriend Nick Gordon was deemed responsible for Kristina's death. From the point of view of the Court, the man was legally guilty of the accident. As, proceeding from the case papers, after the quarrel Nick left the girl in an inadequate state, alone with her problems.

The tragedy knocked down Bobby Brown, in his first interview after the death of his daughter on the air of The Real TV show he told:

"We prayed, all of us hoped for a miracle during these six months. But when God calls you, there is nothing left to do".

With the present wife Alicia Etheredge, the performer brings up three children: the son Claus and two daughters - Bodhi and Hendrix.

In January 2017 the biographic mini-series under the title "The New Edition Story" came out on the screen. All 6 members of the band became co-producers of this series. The same year Bobby as a participant of the "New Edition" band received Lifetime Achievement Trumpet Award.

At present time the singer leads his account on Instagram, posts mini-videos, photos of his children and events that take part in his life. On the 10th of May 2018, the actor published a photo with the new team of the group under the name "RBRM" which is deciphered as Ronnie, Bobby, Ricky, Mike. In the signature to the photo, Bobby announced the concerts which are set for the 18th of May in Atlanta and for the 16th of June in Detroit.

Being a part of "New Edition" band:

As a solo singer: 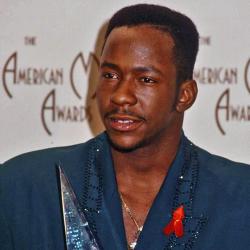