The biography of the well-known French supermodel and the actress Laetitia Marie Laure Casta is full of interesting events and bright acquaintances. This beauty has achieved success in her career for a short time, she appeared on the covers of popular magazines, and the press was talking and talks about the girl with admiration.

On the 11th of May, 1978 in the city of Pont-Audemer in the working family there was born the girl whose fate turned out to be different from the life of her ordinary parents, elder brother and younger.

Laetitia's childhood passed in a quiet rural place far from the city bustle and crowds of people in Normandy. The future top model was brought up in strict discipline. Her parents tried to create strong personalities in their children, imparted to them vital values for love to the family, friends, fidelity, independence, and nobility. But little Laetitia had the character which differed in lack of confidence in herself, stubbornness and absent-mindedness.

It was at school when Casta had got multiple complexes because of the critic of her teachers towards her mental abilities which were worse than her brother’s literacy. Despite her early physical development and bright attractive appearance, the young girl didn't consider herself beautiful and even didn't let herself dream about the boys’ attention. But such approach would become advantageous for Laetitia in the future, as when the girl obtained the status of the popular personality she wasn't interested in "glamorous" playboys but appreciated modesty and simplicity in men.

At the age of 15, the girl went on the vacation with her parents to Corsica (the homeland of her father). There took place the Ms. Lumio Contest, and Laetitia unexpectedly for herself became the participant of this contest, and Casta was dressed only in a fishing suit. The girl was sunbathing on the sand and was noticed by the director of the model agency and he offered the girl a job.

In the morning of the next day, the parents of the young beauty received the invitation to the photoshoot addressed to their daughter. So Laetitia Casta started a new page in her life, despite the excuses of her strict father.

In 1993 Laetitia Marie Laure debuted in advertising of jeans clothes of the Guess brand. The public at once liked the girl. There was something angelic, pure and divinely beautiful in the appearance of the very young Casta.

Further, the beginning model had successfully passed an audition to the prestigious "Elle" edition, she began to take part in the photoshoots for "Glamour" magazine. The photos of Laetitia, who was a usual girl from the village in the past, appeared on the pages of the most famous magazines of the present times:

When Casta saw the photos for the first time, she couldn’t recognize herself at the photos. Professional light, a make-up, correctly chosen angle had an appropriate effect and the lovely girl turned into the beauty queen. Initially, Laetitia's father accompanied her everywhere and was patiently waiting until the end of the shootings to follow his daughter home.

Such famous designers among whom are - Yves Saint Laurent, Ralph Lauren, Lolita Lempicka and so forth invited Laetitia Casta to work with them as a model.

Laetitia Casta keeps a small secret which allowed her to achieve improbable success in the model business – the girl doesn't use any cosmetics in her life. She inspires the geniuses of art by her natural appearance and beauty. Having the height of 169 cm and the weight of 57 kg, the model looks very appetizingly in the shot.

Laetitia Casta possesses not only attractive appearance, but also artistic talent. She acted in many popular movies, having brightly performed the received roles.

The model had her debut as an actress in 1999 during the shootings of the movie "Asterix & Obelix". Here she presented herself in the role of beautiful Falbala. Further the model was invited to take part in the feature picture "The Blue Bicycle", but the picture hadn't been extremely successful. Later the audience saw the famous beauty in such movies as "Gainsbourg: A Heroic Life", "Savage Souls", "The War of the Buttons", etc.

The actress continues to develop herself in cinematography. She has about 37 works in various television projects in her asset. The model also appeared in the theater ("Ondine", "She Is Waiting for You") and also took part in some humanitarian actions.

In 2008 Laetitia was entitled with the status of "The Best Actress" for having "perfectly" played the role in the film "Born in 68". The filmography of Casta impresses with a huge number of great pictures, whereas the cinema is not just the best way to earn money for the girl, but it’s rather a hobby for her. She chooses the roles, according to the offered script, but not starting from the fee size.

Laetitia Casta wasn’t married officially, but she became the mother of three nice children (Sahteene, Orlando, Athena), and it is not a limit, according to the model. Casta dreams to become a mother of at least five kids. She is considered to be a caring and prime mother.

Stéphane Sednaoui became the father of the first child of Laetitia. It was a torrid love affair, but the couple broke up when their joint baby was two years old. The constant unfaithfulness of the French photographer became the reason for their parting.

In 2003 in Naples the supermodel got acquainted with the Italian actor Stefano Accorsi. To know each other better the lovers went on a mini holiday on the island of Corsica. The actress took her daughter with herself and Stefano took his dog. They looked like an ideal family.

In the next civil marriage two children were born at the couple. The model wasn't afraid of childbirth and consequences of the spoiled figure. Laetitia considers the birth of kids a miracle in the woman's life. But this star union had also crashed 10 years later. As Laetitia claimed, their love was wasted.

During the shootings of the movie "A Woman as a Friend" the popular star had had romantic relations with the assistant producer Lorenzo Distante, but in 2015 the press started talking about the following boyfriend of Laetitia - Louis Garrel, known by the movies "Saint Laurent", "The Dreamers". The actor is five years younger than the French model.

In June 2017 Laetitia Casta got married. She officially got married to Louis Garrel. The wedding of the loving couple took place in Corsica, in the hometown of the supermodel. The celebration took place only in the society of their families and relatives and also Laetitia's children from the previous relations.

The tremendous Casta continues to appear at the covers of popular magazines: "Grazia", "Dior", etc. Laetitia still looks perfectly without hair styling and professional make-up what can be observed in her photos which she regularly posts on Instagram and other sources.

Besides the photo shootings, advertising and performing in the movies Laetitia was engaged in the writing of her own scripts. She was keeping the creation of her first project in secret for a long time, but in 2016 her 26-minute short-length picture under the title "En Moi" was presented in Cannes.

The plot of the movie is based on the story of the lonely director who tries to win the fear of failure. The shootings of the picture took place in the Paris Opera House. There are some frank scenes in the movie which impress with their originality. 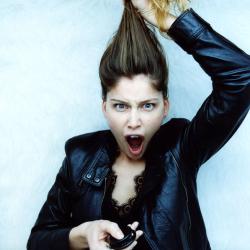