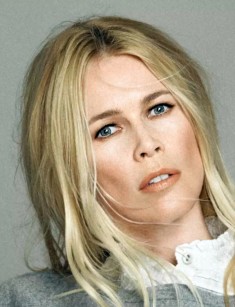 New stars appear every day in the world of show business and advertising. People will remember few of them for such a long period of time as they remember Claudia Schiffer. There are not so many names who keep attracting attention for decades in the world history of the modeling business.

Claudia Schiffer was born on August 25, 1970, in the small town of Rheinberg, West Germany. Father Heinz Schiffer was a lawyer, mother Gudrun Schiffer was a housewife. Besides Claudia, the family brought up three children: the brothers, Stefan and Andreas, and the younger sister, Ann Carolin. The Schiffer family lived in the well-to-do suburb of Dusseldorf. Her father was a strict man.

Claudia was an awkward, shy child at school. She had hang-ups because she differed from other girls. She studied well and liked chemistry and mathematics. Claudia Schiffer dreamed of becoming a lawyer. At the age of 15, she became the winner of the city Olympiad in physics. The victory gave the opportunity to enter the University of Munich without exams.

While studying at the university, Claudia worked part-time at her father's company in Dusseldorf. In 1987, she was spotted in a nightclub in Düsseldorf by a representative of the Metropolitan Model Agency. The agency's director, Michel Levaton, managed to persuade her parents to let 17-year-old Claudia go to a trial photo shoot in Paris.

Since then Claudia Schiffer’s career began to develop rapidly.

In 1988, Claudia's photo already appeared on the cover of Elle. Schiffer signed the first serious contract with the Chanel fashion house at the fashion show of the autumn-winter collection of 1990. Director of the house Karl Lagerfeld liked the model very much, considering her a new Brigitte Bardot.

It took a little time for the young model to get on the catwalk with the five outstanding supermodels: Cindy Crawford, Christy Turlington, Naomi Campbell, Linda Evangelista, Tatjana Patitz.

After joining these models Claudia got a lot of privileges such as photos on the covers of world famous magazines, expensive clubs, private planes, acquaintance with billionaires, stars of show business and sports. The salary of the supermodel was millions of dollars a year. The supermodel is an icon of style and beauty, who is included in all most popular celebrities lists.

The contract with the Revlon was very important at the beginning of Claudia Schiffer’s career. Offers poured in, fees increased together with her popularity. Schiffer topped the list of models with the highest incomes in the world for several years. Her image was carefully improved by agents and distinguished by purity and innocence.

In the mid-1990's, Schiffer was included in the Guinness Book of World Records as she holds the record for the model with the most magazine covers. By 2015, the number of magazine covers with Claudia exceeded a thousand. She repeatedly appeared on the covers of Cosmopolitan, Esquire, Playboy, Marie Claire, etc.

The model participated in all world fashion shows. A serious career step was the contract for advertising Guess clothes. In 1998, the brand L'Oréal noticed the luxurious golden hair of the model and Schiffer began to advertise hair products for the Schwarzkopf brand.

The same year Claudia made her lifelong dream to come true as she appeared in Victoria’s Secret catalog.

Her contracts were not limited to cosmetics and clothing advertising. Claudia signed advertising contracts with the Citroen automobile manufacturer and the Damas Jewelry Company, which represents the brands Tiffany, Faberge, Mikimoto, and others.

Claudia Schiffer became the face of the Fashion Cafe restaurant in New York together with Naomi Campbell Elle Macpherson and Christy Turlington.

Schiffer’s working day cost $ 50 thousand in those years. In 2000, Forbes published the annual earnings of the model which exceeded $ 9 million per year, and her fortune was $ 55 million.

When Schiffer was already popular, she decided to play in films. She appeared on the screen for the first time in 1994. She played bit parts and the name of the actress was not even mentioned in the credits. Moreover, the films were unsuccessful. This did not stop the novice actress.

The movie Black and White by J. Toback was released in 1999. Schiffer (Greta) played along with Robert Downey Jr., Gaby Hoffmann, Jared Leto, etc. in the film. The film had a scandalous popularity that helped Claudia’s further career.

Later, Desperate But Not Serious and Friends & Lovers were released. Over time, Claudia began to participate in more successful projects Life Without Dick, In Pursuit, Zoolander. In 2002, the actress played in the films Dharma & Greg and In bed with the devil. She starred in the episodes of the popular series Arrested Development.

Claudia Schiffer has always differed from most models due to her healthy lifestyle. She does not drink alcohol, take drugs or smoke. Millions of supermodel’s admirers of the 1990’s keep the diet developed by Schiffer’s dietician and do training according to the model’s fitness program.

The essence of the diet is simple. It includes a lot of water, vegetables, fruits, light protein, and the prohibition not eat after six p.m.. Claudia's admirers believe that they can become a little like the unattainable glossy beautiful woman, keeping to several rules of a diet.

A huge number of women around the world watch videos of Claudia Schiffer’s training for more than a decade. With the help of optimism and a beautiful body (Claudia Schiffer has the height of 180 cm and weight of 62 kg), she makes people believe that shaping and proper nutrition are the guarantees of a healthy body. "Claudia Schiffer Perfect Fit" is training fitness programs of the model.

Her exercises do not require fitness equipment. This is warm-up, exercises for the press and stretching. Claudia Schiffer pays the main attention to "woman’s body problems.” She gives preferences to exercises in the water.

Claudia Schiffer, unlike colleagues in the modeling business, was not involved in scandalous relationships and situations. The name of the model is rarely mentioned in tabloids. The model is reserved as a true German.

Only two of Schiffer's love affairs became known before her marriage. In 1993, she got engaged to an American illusionist, David Copperfield. In 1999, David and Claudia broke up. It was persistently discussed in the media that the couple's relationship is an advertising trick.

The next boyfriend was a millionaire from England, Tim Jefferies, the director of the London Hamiltons Gallery. The couple broke up after a year of the relationship. According to rumors, the reason for the breakup is the disagreement in the marriage contract.

Claudia married in 2002. The wedding took place in the Scottish Skibo Castle. A year earlier, the wedding ceremony of Guy Ritchie and Madonna took place there. Claudia asked the guests not to wear white. The bride wore a Valentino ivory dress. It took 6 months to create the dress and it cost 100 thousand pounds.

Since 2004, Schiffer has the husband's name and the title of Countess Claudia de Vere Drummond. The family lives in London, sometimes they stay in their apartment in New York or in Monaco.

The model speaks French fluently, loves Prada and shoes on thin soles. She practically does not wear jewelry.

Supermodels’ time is running out. Fashion stars on magazine covers were replaced by musicians and movie stars. One day the English newspaper Evening Standard published the title: "The supermodel is dead," Claudia Schiffer says. It quotes Schiffer’s words about the change of heroes of slick magazines. According to the record holder of magazine covers, pop stars reign on the covers in the new century.