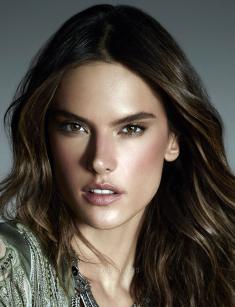 The famous supermodel Alessandra Corine Maria Ambrósio, fans know her by her first name and last name, she is originally from Brazil, although her nationality refers to the Italians. At the age of 15, this girl was recognized by the public and eventually became the face of the world-popular brands "Christian Dior", "Armani Exchange", "Next" and one of the leading "angels" of the legendary company of women's underwear "Victoria's Secret".

Alessandra Ambrosio was born in the small town of Erechim, hiding in vast southern Brazil. Her dream of a career as a model appeared in the biography of Alessandra Ambrosio when the girl was eight years old. She saw the image of the legendary model Karen Mulder on the cover of a glossy magazine and wanted to become as famous. Alessandra started to realize her dream with the help of professional modeling courses four years later.

Her parents encouraged and financed their daughters ' aspirations. Lucilda and Luiz Ambrosio had their gas station, which brought the family a good income. And although her father was ill at the age of 30, he believed that money should be invested in the future of children, not in medicines, which still did not help him. This brave man helped his younger daughter Aline become a lawyer and elder Alessandra to become a world-famous model.

The girl admits that she would not have achieved such success without the financial support of her father. The fact is that she suffered from droopy ears since childhood, although the height and weight of Alessandra Ambrosio matched the model parameters perfectly. And she decided to undergo plastic surgery to get rid of this defect when she was a teenager. And although the surgeon had done a great job, the supermodel had said more than once that she would never make such a sacrifice again. Alessandra assures women: plastic surgery is painful and the results are not worth the test.

Alessandra Ambrosio began her career as a model at the age of 15. She participated in the national competition "Elite Model Look," where the beauty was noticed by the American agency and offered her a professional contract. The girl was alone in giant New York and she realized that she was not ready for adaptation to the metropolis and superhuman loads there. But her friends-models Adriana Lima and Gisele Bundchen helped her. Ambrosio mastered English and understood the rules of American life with the help of these girls.

The first significant work of the model was shooting for the women's magazine "ELLE," and then photos of Alessandra Ambrosio appeared in advertising brands: "Rolex," "Calvin Klein," "Ralph Lauren," "Giorgio Armani" and others. The ideal parameters of Alessandra Ambrosio (the girl's height is 5,7 feet (176 cm), weight 112 lbs (51 kg)) allowed her to get to the show of the company "Victoria's Secret," after which the girl began a long-term cooperation with this brand of lingerie. Moreover, she is almost associated with "angels" of "Victoria's Secret."

It is worth mentioning that the girl is considered the longest-legged in her country and in South America in general. Ambrosio likes to go on the podium in fabulous outfits. Once the model presented lingerie of "Victoria's Secret" made entirely from sweets and dressed in a bra of rubies, amethysts, gold, diamonds and sapphires at other times. This female accessory is still considered to be the most expensive element of lingerie.

Russian fashion lovers received a special photo of Alessandra Ambrosio for the May and September magazines of "Vogue Russia" in 2010 and British fans were the first, who bought the publication "Love Magazine," for which the Brazilian supermodel posed late in pregnancy. The girl was on one of the pages of the annual calendar of the company "Pirelli" several years in a row. Such famous beauties as Natalia Vodianova, Heidi Klum, Miranda Kerr and others participated in the photo shoot together with Alessandra.

Alessandra tried her hand as an actress. Her debut in the movie was the episodic role of a tennis player in the film about James Bond Casino Royale. Then she had other roles in the movies.

Ambrosio appeared in the role of herself in one episode of the popular American series How I Met Your Mother.

Among the romantic relationships of the Brazilian supermodel were many famous men. The first boyfriend was the Brazilian photographer Giovanni Bugatti. They were still teenagers and broke up when Alessandra was invited to America. Later, among the fans of Ambrosio was the Italian mannequin Marcelo Boldrini.

The Portuguese football star Cristiano Ronaldo had an affair with a chic girl and even the Latin American singer Ricky Martin. The supermodel was the last girl he met before he declared being gay.

Since 2007, Alessandra Ambrosio`s personal life is connected exclusively with the businessman Jamie Mazur. They had the daughter Anja Louise a year after the beginning of their relationship and the son Noah Phoenix four years later. Both children have a double surname Ambrosio-Mazur. The parents of children are officially engaged for many years but they do not hurry to register their relationship, continuing to live in an actual marriage.

Alessandra's favorite pastime is to relax on the beach. The girl loves to ride a surfboard, dance on the sand to Brazilian music or sunbathe. The star bought a house on the Brazilian coast. She prefers solitude in this paradise to any international tour or romantic voyage. Ambrosio created a line of women's swimwear, which gave its name "Alessandra Ambrosio by Sais" after many years of showing other people's collections.

In the winter of 2014, the girl appeared on the set in Miami. Then it was clear that Alessandra was fat. But soon the model returned her form. According to Ambrosio, she never tried strict diets. The star adheres to a proper diet and plays sports regularly. One day the supermodel admitted that she was not fond of exercise before her pregnancy.

In 2013, the paparazzi caught Alessandra Ambrosio at the airport without makeup. Fans noted that the model looks great without a drop of makeup. However, it should be noted that Ambrosio follows her style anywhere and thousands of girls imitate her manner of dress.

The girl is a goodwill ambassador of the National Multiple Sclerosis Society.

Millions of fans watch the supermodel on the social network on "Instagram." Alessandra personal and working pictures shares with her subscribers there. The model pleases her fans with candid shots and photos in bikinis. Besides, Ambrosio developed an official website, where everybody can get acquainted with her biography, see the gallery and video.

In November, Alessandra Ambrosio announced her retirement from Victoria`s Secret. The model was on a catwalk in Shanghai and she confirmed these rumors a few hours before this event. But finally, Ambrosio appeared before the public in one of the hottest outfits of the evening. Other models also showed themselves in all their glory. Blanca Padilla tried on Golden wings. This image has become one of the favorites of fans of the brand.

Later, Ambrosio shared in an interview that she decided to work more actively on her fashion design line and film career. Also, Alessandra wants to spend more time with her kids.

The girl appeared in the second part of the comedy Daddy's Home the same year. The actress returned to her role of Karen, the wife of the hero Mark Wahlberg.

And in December, the celebrity participated in the filming for the Christmas calendar edition Love. The supermodel appeared in a daring image of a sexy biker, who takes off her clothes and then performs acrobatic tricks in the process of riding a motorcycle.

In March 2018, the star appeared on the red carpet at the ceremony of awarding the prestigious Oscars. Guests of the event were struck by Alessandra's clothes: a transparent dress of flesh color, through which the underwear of the model shone.

In May, Ambrosio starred in a piquant photo shoot for Tatler magazine in honor of the upcoming World Cup. The model appeared in the form of a player of the Russian national team. The girl decorated the cover of the June issue.

At present, Alessandra's net worth is estimated at $60 million.