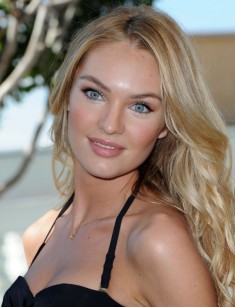 Candice Swanepoel at Victoria’s Secret fashion show in ShanghaiCandice Swanepoel is a top model and an "angel" of the famous Victoria's Secret underwear brand. Candice Swanepoel cooperates with various world-famous fashion brands: Givenchy, Versace, Calvin Klein, Miu Miu, Swarovski, Nike, and others. Candice gained popularity and recognition due to her participation in the fashion parades and photo shootings in underwear and swimsuits.

The South African model Candice Swanepoel was born on the 20th of October, 1988 in Mooi River. She spent her childhood in this small picturesque town. The girl's parents were not poor people by the standards of South Africa, and they even had their farm. Their mother was bringing up and educating Candice and her brother. The children helped their mother in the household, and as the model remembers, there were times when they attended the birth of cows.

Swanepoel was studying at school and had no plans for the future. It was a chance meeting in the market which had determined her destiny. Candice turned fifteen when the agent from the modeling agency Kevin Ellis paid attention at her. He was shocked by the girl's unusual appearance: blonde hair, blue eyes, perfect long legs. According to his opinion, the girl resembled a flamingo.

The same day the agent met with the Swanepoel’s mother and introduced her to the director of the model agency. And later they sent the pictures of the 15-year-old teenager to London branch of the model agency. Soon they invited Candice to the capital of the United Kingdom. In 2003 she went abroad for the first time. She had to leave school for her model career.

The model biography of Candice Swanepoel was as bright and prompt as its start. She participated in advertising and commercials of a significant number of brands. Her face appeared on the covers of glossy fashion magazines. In three years, Candice joined the displays of fashion collections of world-famous fashion houses: Dolce & Gabbana, Alberta Ferretti, and many others. She took her next step in the career, and it was the advertising campaign for Nike trademark. Her photos appeared on the pages and the cover of "Vogue Greece" magazine.

In 2007, Swanepoel appeared at Victoria's Secret Fashion Show for the first time. In 2011 and 2013, the model opened the show, and in 2014 she closed the fashion display. She was the first South African model during all times of existing of Victoria's Secret brand. In 2010 she joined the team of the "angels". This event is crucial in the life of each model, it speaks about recognition of the talent and professionalism.

In 2013, Candice Swanepoel got some special mission. The model got the right to present a precious Royal Fantasy Bra at the show. This bra is exceptional, and it’s the pride of Victoria's Secret brand. It is fully decorated with precious stones. According to the experts, the cost of this bra amounts at $ 10 million.

Candice Swanepoel collaborated with Chanel, Versace and Max Factor. Also, she was the face of the advertising campaign for the Turkish Zeki brand. Moreover, she represented the swimwear collection released by Kim Kardashian.

Candice is called "African Kate Moss" in the fashion world. Indeed, today Swanepoel is on the same level as Heidi Klum and Alessandra Ambrosio. She enters TOP-10 of the highest-paid models of the world. The geography of Candice's work covers Europe, America, and Asia.

However, the model couldn't receive the secondary education because of her busy working schedule. But this fact doesn't prevent her from speaking fluently in three languages: English, Portuguese and African.

Candice Swanepoel has stability not only in her work but also in her own life as well. Since 2005, she has relations with the model Hermann Nicoli. The future spouses got acquainted during one of the Parisian fashion displays: Candice was 17 years old at that time.

Candice has met with her future husband for almost ten years. They did not always manage to spend a lot of time together because of their hard schedules. In August 2015, the couple announced their engagement, and in May 2016 there appeared news about Swanepoel’s pregnancy.

In October 2016, Candice gave birth to the son. The parents called him by an unusual name - Anacan. In translation from the Brazilian language, this name means "a parrot". The photographer Jérôme Durand, a friend of the family, was the first to announce the fact that the top model had become a mother. He published a photo of Candice from the photo shoot during the pregnancy on Instagram. He also congratulated Swanepoel with the birth of the child in the post under the picture.

Candice Swanepoel likes traveling, skateboarding, pampering her favorite dog Mimi. She says that self-confidence is the primary quality of life. It helps you to cope with the problems and achieve the goal.

Due to her profession, Swanepoel continually has to keep her figure in good form. The model leads sporting style of life, but she doesn't restrict herself too much in nutrition. On the contrary, Candice recommends to eat the most nourishing breakfasts and to avoid snacks. What about the sport, Swanepoel prefers boxing, training with a barbell, jumping on the trampoline and pilates. The model believes that one should show the slim and athletic body in the photos, but not thin and exhausted. The model is 176 cm high and weighs 55 kilos.

Candice continued to work just a month after the birth of her son. And in November 2017, Candice Swanepoel participated in Victoria’s Secret fashion parade in Shanghai. The fans of the model were looking forward to seeing Candice on the podium. That's because this Shanghai underwear display was the first one for Swanepoel after the childbirth.

Also, this fashion display in Shanghai became a jubilee for the model: Candice Swanepoel celebrated the tenth year of her work at the famous underwear brand. Other famous supermodels of our times appeared on the podium together with Candice Swanepoel, among them: Bella Hadid, Karlie Kloss, Adriana Lima, Alessandra Ambrosio and others.

In December of the same year, the top model officially announced that she was pregnant for the second time. This news surprised Swanepoel’s fans.

In order, to inform her admirers of such delightful news, Candice posted a romantic photo on Instagram, in which the future mother in a slip dress was standing in front of the greenery and was holding her rounded belly with her hands. Her subscribers congratulated the model and wished health to her and her baby in the comments under the picture.

But the fans were shocked not by the news about the pregnancy of the model, but by the fact that Candice managed to hide natural changes of her figure at the fashion display. She did it so skillfully that the audience did not even suspect the top model of being pregnant though Candice appeared on the podium in a bright red separate set of underwear, which didn't hide her belly.

Also, the fans thought up a theory that the photographer took this photo during Candice's first pregnancy. They think that woman's figure could not change so much in a month.

Later, this theory got confirmation. Swanepoel posted a new photo in the underwear on which she still appeared with flat belly.

In January 2018, Candice Swanepoel informed her fans and the press that she already knew the sex of her future child. Soon, Anacan will have a brother. 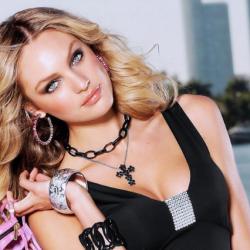