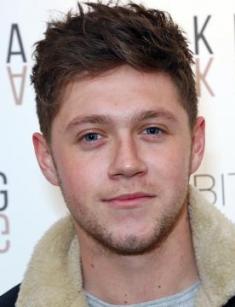 Niall James Horan is an Irish singer, the participant of The X Factor-2010, and the soloist of One Direction. He was born on September 13, 1993, in Mullingar, Ireland, into the family of Bobby Horan and Maura Gallagher. The boy became the second child in the family after the eldest brother Greg.

In 1998, the parents divorced and separated. The brothers lived with their mother and father in turn. When Maura married again and moved with her new husband Chris to Meathas Truim, Greg and Niall stayed in their home town with the father. Later, the would-be star took music and singing classes. He attended the St. Kenny National School, got a place in a church quire, and started participating in theater performances.

One Christmas, the father gave his son a guitar as a present. Niall tried to copy his icon, Michael Bublé, and learned how to play quickly; the song “Wonderwall” was the first one he mastered. The young man felt confident on the stage and turned into the town star; he even opened the show for the singer Lloyd Daniels.

16-year-old Niall Horan did his best at The X Factor. The 2010 show was the most popular season of the program; Louis Walsh, Simon Cowell, Dannii Minogue, and Cheryl Cole were the jury members. Niall came to the project as a soloist. However, he was offered to make a boy band One Direction with other artists: Zayn Malik, Liam Payne, Harry Styles, and Louis Tomlinson. They switched to the group competition category.

One Direction began to conquer the show business. More than 500 000 people visited their concerts throughout three months. In November 2011, the group released the debuting album Up All Night. This work immediately flew to the top of music charts in 16 countries. 600 000 and 900 000 copies were sold in Great Britain and America in six months.

The worldwide sales reached 2.7 million copies. The first music video “What Makes You Beautiful” had 24 million views on YouTube within a month and gained the BRIT Award for British Single in 2012.

At the end of 2011, the band signed a contract with the American company Columbia Records. The first tour concerts in Great Brittan, the USA, and Australia were a success.

November 2012 was marked with the second album Take Me Home and its single “Live While We’re Young”; 314 000 copies were sold in the first day. Soon, this work topped music charts in 35 countries. The next year, the documentary One Direction: This Is Us came out; it presented each group member’s biography. The movie grossed $60 million all over the globe.

In May 2013, the band signed a contract with Office Depot selling school supplies. Besides, the musicians appeared in commercials for Nokia, HarperCollins, Pok&mon, and Hasbro.

In 2012, Niall Horan showed his acting talent in the youth sitcom iCarly. In November 2013, he joined a unique event, 1D Day, organized by YouTube. It lasted seven and a half hours; fans could communicate with their favorites online.

In a while, the third album Midnight Memories and the single “Story of My Life” were released. The concert video One Direction: This Is Us broke the record: 270 000 copies were sold in three days after it came on DVD.

2014 was notable for the new movie: One Direction: Where We Are – The Concert Film. By the end of the year, the fourth album Four with the single “Steal My Girl” appeared. The new tour was beneficial and brought its organizers $282 million. The next year, Zayn Malik left the group, so the fifth work Made in the A.M. was premiered without him.

In 2014, the artist started dating the Victoria`s Secret model Barbara Palvin; he even introduced the woman to his family. However, the young people denied their romance several months later.

At the end of 2015, Niall had dinner in the restaurant Nobu in Malibu; Selena Gomez accompanied him. Several weeks later, the couple was seen together at a friends’ party. Katy Perry, who was nine years older than Horan, told journalists about their flirt. However, the musicians remained friends.

In 2016, Niall Horan left One Direction and announced he began his solo career. The musician signed an agreement with Capitol Records and presented the debuting single “This Town” soon. Summer 2017 brought another hit, “Slow Hands”. It reached the third position in Australia and became number seven in Great Britain.

In the middle of 2016, Horan and his new girlfriend, Céline, attended the British Summertime festival in Hyde Park.

In 2017, the musician participated in a photo shoot for Notion Magazine. The same year, Horan began to date the actress Hailee Steinfeld; they split up in 2018.