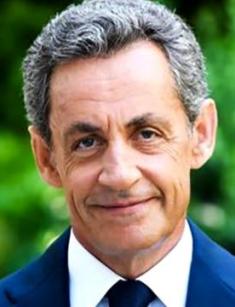 Nicolas Sarkozy is known to the world community as the former President of France and a prominent statesman and politician.

Nicolas Sarkozy was born in an aristocratic family. The father of the future President of France, Pál István Ernő Sárközy de Nagy-Bócsa, came from a Hungarian noble family. In 1944, the man's family had to leave Budapest. Already in Baden-Baden Sárközy turned into Sarkozy. Pál István Ernő went to Algeria as part of the French foreign legion.

After that, the boy's father returned to Marseille, received French citizenship, and then moved to Paris. In 1950, Pál István Ernő married Andrée Jeanne "Dadu" Mallah. The family had three children. They were named Guillaume, Nicolas, and François. But his parents' marriage started falling apart.

The first years of his life Sarkozy lived in the 16th arrondissement of Paris. The boy was not full of zeal for studying. Gradually the influence of the father on the children began to wane. The education of the children fell on the shoulders of their grandfather, who was a staunchly Gaullist. According to family members, the brothers needed to feel and act like native French.

After graduating from Catholic school, Nicolas enrolled at the Université Paris X Nanterre. In 1978, Sarkozy officially became a Master of Civil Law. The future president did not plan to stop on this and ended up at Sciences Po, the primary institution of higher learning for French political and administrative elite. But he never graduated from this institution.

Nicolas Sarkozy's political career began in 1974. The young man became a member of the Union of Democrats for the Republic party. When the politician was 28 years old, residents of his native city elected Nicolas mayor. Until 2002, Sarkozy worked in this position.

The future president served on the Youth Committee, which supported Jacques Chirac during the 1981 presidential election. Thanks to this, the young man was noticed at a high level. Chirac promoted the guy in big politics. And already in 1988, Nicolas was in the lower house of Parliament as a deputy.

There is an interesting fact about Sarkozy's political career. In 1993, it was he who was entrusted with negotiating with the terrorists who captured kids in kindergarten. And here came the finest hour of Nicolas. Édouard Balladur saw him and invited to the post of Finance Minister. Sarkozy also had to assume the duties of Minister of Worship.

Despite the friendly relations with Jacques Chirac, in 1995, by that time minister Sarkozy decided to stand by the side of Balladur, who enjoyed popularity in French society. This proved to be a fatal mistake, as Chirac won the election. As a result, Sarkozy was left without government posts.

In two years, the new French president decided to bring the talented politician back to the government. Nicolas received the post of deputy and again began to prove his loyalty to Mr. Chirac. Sarkozy showed his support to the president during his re-election campaign in 2002. Now Nicolas turned from deputy to the Minister of the Interior in the government of Jean-Pierre Raffarin.

His work as a Minister showed Sarkozy as an active statesman, who was ready to express his loyalty and flexibility when it was needed. But not all reforms which were carried out by the politician caused approval of society.

Liberals believed that Nicolas infringed on people's rights. According to many, the policy advocated by Sarkozy can be influenced by Catholicism, which Nicolas professed. But the future President of France dispelled it in the election speech.

The President of France

From 2007 to 2012, Nicolas Sarkozy held the position of the President of France. The head of the country immediately started reforms. The changes primarily affected the 1958 Constitution. Sarkozy decided to impose restrictions on the re-election of the president, allowed Parliament to veto candidates for the post of the Head of State. Most of the changes concerned the activities of the French president.

Nicolas Sarkozy did not care much for domestic policy. In addition to updating the Constitution, the president appointed his friends, including François Fillon and Alain Juppé, Bernard Kouchner and Michèle Alliot-Marie, to significant posts. After a while, Sarkozy's party won the parliamentary elections. In France, during the term of Nicolas, intergovernmental commissions were created, which were responsible for solving domestic political problems of the country, and implement economic reforms.

Sarkozy was not popular in society. This led to demonstrations and strikes in various regions of France, which later turned into riots.

The central task set by Nicolas Sarkozy in foreign policy was to establish relations with the European Union. The French president tried to influence other politicians during the development and signing of the Lisbon Treaty. According to the head of state, this document would help the EU to count on the implementation of more ambitious plans.

The situation in the world was not easy. The members of the European Union could not agree on Kosovo's independence. But France sided with the minority and began to build relations with this state, as well as with Serbia. Sarkozy played a crucial role in the military conflict in South Ossetia.

Nicolas personally came to Moscow and later to Tbilisi to settle relations. With Dmitry Medvedev, the politician developed a plan that was adopted by the presidents of Georgia, South Ossetia, and Abkhazia.

Already in March 2011, Sarkozy had problems. The representative of the Libyan government said that Muammar Gaddafi had financed the campaign of the French president. Immediately, the French Prosecutor's office opened an investigation. Fortunately for Sarkozy, this story had no consequences for him as president.

Then came May of 2012. The world media was full of headlines that Nicolas was "One Term President." The citizens of France were against the politician and preferred François Hollande to him.

Nicolas Sarkozy's personal life is as intense as his political career. The ex-President of France was married three times. The politician married for the first time in 1982. Marie-Dominique Culioli became the man's wife. The girl came from a family of pharmacists. The young couple had two sons, Pierre and Jean.

After twelve years of marriage, Sarkozy decided to file for divorce. Cécilia Attias was the reason for this action. The young woman was already married, but romantic feelings for Nicolas prevailed in her. Cécilia divorced her husband. In 1996, Nicolas and Cécilia became lawful husband and wife. A few months after the marriage, the family had their firstborn together, Louis.

The newlywed Mrs. Sarkozy took a crucial part in her husband's political career. The woman appeared at official events. But at some point, the media started talking about a conflict between the spouses. The Sarkozy couple did not plan to confirm or deny this fact. In October 2007, Nicolas and Cécilia officially announced their divorce.

In February 2008, Sarkozy introduced his new wife to society. It was Carla Bruni. The girl was known to the public, as she often acted as a model and singer. The spouses have quite a big height gap: Sarkozy is 5 feet 44 inches tall, and Bruni's height is 5 feet 74 inches. Because of this, the girl has to wear shoes without heels. In 2011, Nicolas and Carla made an official statement: the family had a daughter Julia.

By this time, Sarkozy's children had already grown up and gave their father grandchildren.

Nicholas Sarkozy is said to have a net worth of $12 million. Now there is almost no information about Nicolas Sarkozy's life. The prominent politician prefers to be in the shadows after a lost election race.

Photos of Sarkozy rarely flash on social media, unlike his wife, Carla Bruni, who resumed her professional activity.