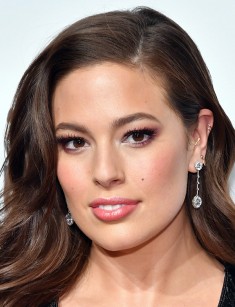 The model Ashley Graham is the girl who inspires the beauties having excess weight to believe in themselves and to learn them how to look beautiful. Ashley herself who weighs 91 kg with a height of 175 cm, considers that any figure is a priori fine, it’s only necessary not to be afraid to recognize it and to learn to select dresses in the correct way. Besides, Ashley Graham has proved in her own example that the model business is open even for girls of "plus size" category.

The future star of the model business was born on the 30th of October, 1987 in the town of Lincoln which is situated in Nebraska. Ashley was the senior of three sisters, therefore, her mother constantly asked the girl to help her to take care of younger sisters. Ashley's parents had to work hard to support the family. Since early years Ashley Graham had experienced fully "delights" of her excess weight.

The schoolmates mocked at the girl, they were laughing at Ashley’s non-standard figure. And even close people – her parents — didn't wish to support their daughter, constantly pointing at her excessive plumpness. Crying, Graham dreamed of the model career, understanding deep inside that these imaginations could hardly become a reality. However, the fate had intended otherwise: constant sneers and offenses forced the girl to courage herself and to prove to people around that the model world was open not only for thin girls.

The model biography of Ashley Graham began like in the fantastic movie: in 2000 the young man who was the representative of one of the model agencies came to the girl in the shopping center. Ashley who at that time hardly turned 12 years old attracted the attention of this person with her non-standard appearance. Having passed the casting arranged by this agency, the girl soon began to take part in the photoshoots for the "Wilhelmina Models" company.

At first, Ashley Graham wasn’t in a strong demand as a model, but the girl didn't despair, understanding that she had got a rare chance to get to the world of show business. Ashley wasn't going to give up her dream. Two years later the persistence and belief of the girl were rewarded. The representatives of the "Ford Models" agency had paid attention to Ashley Graham. At once they offered the girl the tempting contract which Graham accepted.

This cooperation became the real beginning of Ashley's model career. The photoshoots with Ashley Graham began to appear on the covers of the popular magazines for teenagers, and the face of the charming non-standard model became recognizable.

The release of the photo of the girl in the cult glossy magazine "Glamour" in 2009 became the following stage in Ashley Graham's career. It was one of the first photoshoots of plus-size models, which came out under the title "These Bodies Are Fine in Any Size". Together with Ashley, the dumplings Lizzie Miller, Jennie Runk and other girls posed for the photo.

A year later, in 2010, Ashley was invited to participate in the shootings for Levi's company which was releasing jeans clothes. Ashley became the face of the advertising campaign of jeans for those whose weight was far from ideal.

According to Ashley, plump persons shouldn't consider at all that fashionable clothes are not for them. The girl is ready to inspire the girls of non -model forms for the choice of fashionable clothes in her own example. Ashley Graham admits that before her model career she also put on only baggy shapeless trousers and sweaters, trying to hide her full figure. However, it became clear to her that it was possible to dress in an absolutely different way and at the same time to look stylish.

The same year Ashley Graham dared to take part in the frank shooting for the underwear brand. The girl became the face of "Lane Bryant" advertising campaign. The video hadn't undergone censorship for the display on the television, however, the YouTube audience treated the video with the participation of the plus-size models favorably.

Ashley Graham became recognizable and popular. The name of the girl sounded even from the lips of those people who were never interested in events of the fashionable world. The model began to be invited to the talk shows and TV programs.

In 2012 Ashley Graham signed the contract with "Marina Rinaldi" brand. The signboards and advertisement banners of this advertising campaign demonstrated a smiling face of the beautiful Ashley and brought the model even greater popularity. Besides, the same year the girl for the first time participated in the so-called special Fashion Week devoted to the clothes for people with big sizes. At this fashionable display, Graham was called the best model.

A year later Ashley decided to start her own business. The girl released an underwear collection for plump ladies. This line became popular, having attracted the interest of the fashionable women of big sizes. According to Ashley Graham, such success of her collection can be easily explained: who if not a plump woman can consider all the details when producing the underwear for the same women of plus size.

Ashley Graham independently presented this collection and demonstrated the produced models on her own figure. It’s worth noting that the collection turned out to be very successful: in each set, Ashley looks sexually.

The year 2014 was marked by Ashley Graham's appearance on the screens of the MTV youth channel. The girl acted in the popular show "Impossible is Nothing", having tried herself as a mentor of the beginning plus-size models. The same year the new achievement awaited for Ashley: photos of the girl were published in the British "Harper’s Bazaar".

A year later the pictures of Ashley Graham were published in the "Sports Illustrated Swimsuit" cult sports glossy magazine that became one more step in Ashley’s career. The year 2016 was not less rich in events — the girl had worked with "Forever 21", "Nydj" and "Addition Elle" companies.

The personal life of the model had settled happily. Justin Ervin is Ashley Graham's husband. The young man works as a cameraman and a videographer.

The spouses got acquainted in 2009 in the church. Since then the loving couple has been constantly together. They celebrated their wedding in 2010.

Now Ashley Graham continues to perform, without refusing to take part in the photoshoots. The year 2017 turned out very saturated because of the displays and shootings. In her free time, the girl goes in for sports and travels. By her own recognition, Ashley carefully watches what she eats and has an active schedule of physical exercises.

The following fact upsets some admirers of the model during the latest time: in 2016 the girl managed to lose 10 kilos. However, not all the comments on Instagram of the beauty turned out to be flattering. Her admirers are afraid that their favorite model will finally lose weight and from the plus-size model of non-standard size will become the ordinary one. 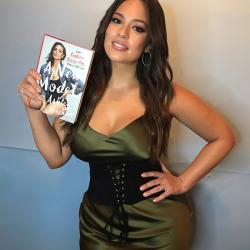