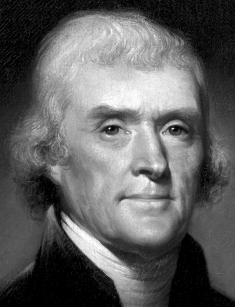 Thomas Jefferson is the third president of the United States, Founding Father of the American nation, the author of the Declaration of Independence.

The future politician was born on April 13, 1743, in the city of Shadwell in Virginia, which at that time was a Colony, in a family of influential planters. The ancestors of his father, Peter Jefferson, were immigrants from the English County of Wales. His mother, Jane Randolph, was closely related to the first president of the Continental Congress. Two years after the birth of Thomas, the family moved to Tuckahoe Plantation, upon the death of William Randolph, the plantation's owner and Jefferson's friend.

At the age of 9, Thomas began attending a local school run by a Scottish Presbyterian minister where he began studying the basics of Latin, Greek, and French. Six years later, the boy was sent to an educational institution headed by Reverend James Maury for two years. Since Thomas's father had passed away a year before, the teenager temporarily settled in the house of Maury. During his studies, the boy acquired all the necessary knowledge of history and exact sciences. In 1760 Thomas enrolled at The College of William & Mary, where he chose to study philosophy, maths, and law.

His teacher, professor William Small introduced the young man to the works of outstanding scientists. Isaac Newton, John Locke, and Francis Bacon - three geniuses who influenced the formation of the world perception and political views of the future politician. The young Jefferson was also fond of the works of the ancient philosophers and playwrights; for the sake of reading them, he thoroughly studied ancient Greek grammar. In addition to the main subjects, Jefferson learned to play the violin.

The young man spent his free time in the company of fellow students, attending the gatherings of the collegiate secret society Flat Hat Club, or going to the balls, which were arranged in the mansion of the lieutenant governor of Virginia Colony, Francis Fauquier. This did not prevent Thomas from graduating with honors in the subjects he studied. He read the law under Professor George Wythe's tutelage to obtain his law license while working as a law clerk in his office.

After two years of legal work, in 1769, Jefferson was elected as a delegate in the Virginia House of Burgesses. In 1774, following the passage of the Intolerable Acts, by the British Parliament, Jefferson wrote a resolution calling for a "Day of Fasting and Prayer," in which he expressed the colonies' intention to establish self-government. Jefferson openly criticized the activities of the British Parliament, which caused sympathy of the people.

Even before the American War of Independence began in the winter of 1775, Thomas became a delegate to the Continental Congress. In two years, the Declaration of independence was prepared, the date of ratification - July 4, 1776 - became the official date of birth of the American nation. His own political ideas, in addition to their implementation in the form of the main document of the United States, Thomas Jefferson implemented in his homeland Virginia, where in 1779 he was elected to be the governor. In 1781-1782 Thomas worked on the Notes on the State of Virginia, for writing which he received the status of scientist-encyclopaedist. The notes were published after the end of military actions.

Since 1785, Jefferson was the ambassador of the young state in France, but at the same time, he continued to lead the legislative processes in the United States. In his letters, Jefferson corrected the author of the Constitution and the Bill of Rights, James Madison. Coming back to his homeland five years later, the politician got the post of First Secretary of State of the United States and became the member of the Democratic-Republican Party. In parliament, the party promoted the idea of freedom of each state and the agricultural policy in the country, making farming and small crafts the essential part of their program.

The Declaration of Independence

The United States Declaration of Independence was created by five authors: Thomas Jefferson, John Adams, Benjamin Franklin, Roger Sherman, and Robert Livingston. At the last stage, the document was worked through within seventeen days by one person - Thomas Jefferson, after which it was signed by other authors and representatives of thirteen administrative entities.

The first section proclaims three postulates of equality between people: the right to live, liberty, and to acquire and possess property. The second and third parts of the Declaration affirm the sovereignty of the colonies and the policy of non-interference of the United Kingdom in the affairs of the United States.

At home, Jefferson criticized the first US Constitution, which did not limit the number of terms that a person can be elected for the post of president of the country, which essentially made the ruler absolute monarch. Jefferson considered the development of large-scale industrial production to be the reason for the impoverishment of people. The politician was sure that the society of free private farms was the basis of a healthy economy.

Human freedoms should function not only when it comes to life and property, but also when it concerns the right to express one's ideas openly. Education of people is the heart of a free civil society. Therefore, every citizen has the right to acquire education. Jefferson advocated the separation of Church and state. Later, the philosopher created his own interpretation of the New Testament, which would then be given to every president of the country for the next century. The politician disagreed with the federal system of government, which was proclaimed by the Constitution of 1787. Thomas advocated the superiority of states to the central authority.

Four years before his first term as president, Thomas Jefferson was elected as Vice President of the United States and then became president in 1801. As head of the United States, Thomas made some changes. He organized the bipolar party system of Congress, reduced the Army, Navy and the number of officials to the necessary minimum. Thomas expanded the concept of the basis of the state to the four pillars of the economy: farmers, trades, light industry, and shipping.

In 1803, under a trading contract with France, Louisiana became the territory of the United States. The value of the transaction at that time was estimated at $ 15 million. At the end of the second presidential term, Thomas Jefferson established diplomatic relations with the Russian Empire. In order to protect the United States from unforeseen expenses and protect the independence of the country, Jefferson signed a decree on the termination of foreign trade at the time of the war in Europe with Napoléon Bonaparte. Such a move turned out to be a mistake, and it was damaging to America since it led to a temporary reduction in the economic growth of the state.

The first and only wife of Thomas Jefferson was his second cousin Martha Skelton Jefferson, whom the future politician married at the age of 29. Martha Jefferson was born in the family of John and Martha Wayles, but a week after giving birth, the girl's mother died. Martha received an excellent home education: she knew several foreign languages, sang, read poetry, played the piano. The girl had a lively character, a good heart, and an attractive appearance.

The bride at the time of the wedding with Jefferson was already a widow and was raising a son from her first marriage. The first husband died two years after the formalization of the relationship. Martha was much luckier in her second marriage. The wife of the third president of the United States was not only a beauty and a good housewife, but also a great companion for the discerning intellectual Thomas.

The Jeffersons were happy for ten years at the Monticello family plantation. During this time, they had six children, four of whom died as infants. The couple was left with two daughters: Martha, whom her parents affectionately called Patsy, and Mary.

In 1782, just after giving birth to her last daughter, Martha died in the arms of her inconsolable husband. On her deathbed, Thomas swore to his wife that he would never marry again, and kept his promise. That is how the love story of Thomas and Martha Jefferson ended.

However, in France, the US Ambassador was having an affair with a Parisian woman, Maria Cosway. The relations with the married lady subsequently developed into a friendly exchange of letters, which Thomas and Maria kept till the last days of life. In Paris, another the future US president started another love affair. A young enslaved woman, Sally Hemings, half-sister of Martha from her father's side became the lover of Thomas.

The girl could stay in a free Europe but preferred to return to the United States, where, living in Jefferson's house, she gave birth to eight children. The foes of the third President exposed the love affair of the aristocrat with the slave, to which Jefferson replied with silence. According to the DNA examination, which was conducted in the 21stcentury, only one of Sally's sons was a child of Jefferson. The other children were born from different fathers.

After the presidency, Thomas Jefferson finally settled in his private plantation, Monticello, which was built by the engineering design of the owner. Thomas was talented in many ways: in addition to law and legislation, the politician was engaged in architecture, invention, the building of home furniture.

Jefferson's private library consisted of 6.5 thousand books. After the thinker's death, the relatives donated the books to the Library of Congress. Every day the politician corresponded with the best minds of his time, sending up to three hundred letters a day.

Death caught the creator of the Declaration of Independence on July 4, 1826, the day of the fiftieth anniversary of the founding document of the American nation. Jefferson was buried in Monticello. In 1923 the plantation passed to the state, today the mansion is a UNESCO World Heritage Site.

A few interesting facts related to the name and biography of Thomas Jefferson:

"Never put off till tomorrow what you can do today."

"The selfish spirit of commerce knows no country, and feels no passion or principle but that of gain."

"Laws and institutions must go hand in hand with the progress of the human mind."

"The tree of liberty must be refreshed from time to time with the blood of patriots and tyrants."

"Only those people who are always aware of what is happening have the right to choose their government."