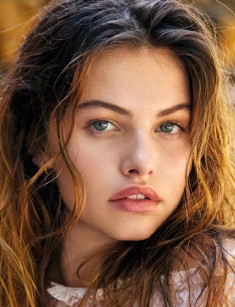 Thylane Blondeau is the highest paid young model of the international level whose career had begun when she was 4 years old. In the official biography of Thylane Blondeau, it is told that the girl was born on the 5th of April, 2001 in the family of the designer and the football player.

Véronika Loubry is Thylane’s mother. Among the French public the woman is known as a TV host, but after the birth of her children, she got engaged in the sphere of design.

At the present period of time, Véronika designs and produces clothes for kids and pregnant girls. Thylane’s father is a French football player Patrick Blondeau. Thylane is not the only child in her family. The girl has a younger brother who was called Ayrton-Romeo. The boy was born in 2007.

Thylane had her first shootings in advertising projects when the girl turned 4 years old. The little girl was recognized as the most beautiful and highly paid model in the world. Jean Paul Gaultier became the first company with which Blondeau signed the contract.

In 2011 Thylane found herself in the center of the juicy scandal. The girl took part in the provocative photo shoot for "Vogue" magazine which had seemed to the public unacceptable for the child of 10 years. The heads of the edition were accused of sexual abuse of the juvenile children.

At the photos, the model appeared in the image of "a woman of easy virtue". The teenager had a bright make-up, she was dressed in outfits with frank cuts. Moreover, she used poses of the adult and seductive woman. The invited editor and designer Tom Ford was responsible for this release of the magazine.

The National Council for Motherhood of Great Britain said that the problem was not in the publishing company, but in the model agency that was representing Thylane’s interests. The agents didn't understand that they were working with the child, but not with the adult person. According to the chairman of the organizations, such photoshoots "restrict children’s rights".

The psychologists agree with it. The experts consider that the shootings in such images negatively affect psychological state of the model. They explain it with the fact that the girls begin to look at the world, not with the children's eyes. At the same time, their age and experience aren't enough for the formation of the correct judgment of the events.

This scandal had had a positive impact on Thylane’s career. Three years later the young model became a part of the team of the international "IMG Models" agency. The contract was signed, but in accordance with the rules of the organization, the girl will be able to start working when she turns 15 years. In addition, the girl created her own channel on YouTube.

The girl's face was desired to be seen on the covers of the fashion magazines. The editors of "Vogue", "L’officiel Enfants", "Jalouse Magazine", "L’Officiel Paris", "Marie Claire" invite Thylane to take part in the shootings till present time.

The French girl becomes more and more popular every day. In 2014 she received an invitation from the creators of the movie "Belle & Sebastian". The model turned into the character of Gabrielle. In December 2015 the audience could see Thylane on the big screen for the first time.

In May 2016 the young model sparkled at Cannes Film Festival. The girl has modest parameters: her height is 168 cm and she weighs 58 kg. But Thylane appeared in a magnificent image in front of the photographers. Blondeau had her hair arranged in a plain way, and it was accompanied by simple and weightless make-up. The girl had chosen a laconic black dress for the coming out party.

The representatives of the model business and designers say that Thylane will succeed in her further career. The experts often compare Blondeau with another young model – Kristina Pimenova who was recognized as the most beautiful girl.

The girl prefers not to talk about her private life. On her official page on Instagram Thylane publishes photos of the guys, but signs them as "a friend" or "my brother".

The career of Thylane Blondeau is taking off very quickly. In 2017 the girl was invited to become an ambassador of the international cosmetic brand - L'Oréal Paris.

In addition, the model participates in the displays of fashion designers. Blondeau travels all over the world and takes part in the shootings for glossy magazines. 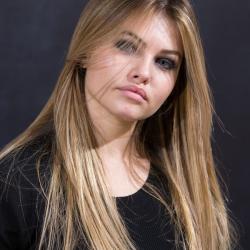