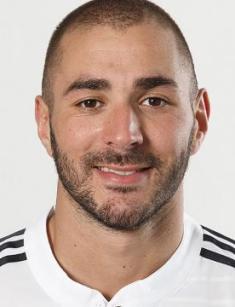 Karim Benzema is a football player of Spanish club Real Madrid and the France national team. On the field, the football player draws the attention of the viewers with his excellent technique, for which the critics call him a mixture of Ronaldo and Zinedine Zidane, and the teammates refer to him as the best striker in the world. From the other hand, all the stories that Karim got caught up in cannot make him a perfect role model for the younger generation.

Karim Mostafa Benzema is Algerian by nationality. He was born in 1987 in Lyon in a large family of emigrants. His parents, Hafid Benzema and Wahida Djebbara Benzema, have brought up nine children. The family lived in the poor and troubled and sometimes dangerous suburbs of Lyon, Bron Terraillon. Benzema started his career by playing for the club with the same name.

As a team player, Karim stood out by his technique, and as a result got an invitation to a professional level club. A year later, Benzema was already attending Saint Louis Saint Bruno college, which was a part of the training program for Lyon football players. The future striker was well-behaved, but he did not do well in college, his academic performance left a lot to be desired.

At the age of 17, Karim was included in the reserve team of Lyon, where the young man soon grew up to the post of the central striker. In 2004, Benzema got into the first team of the club and won the 2004 UEFA European Under-17 Championship. In January of 2005, Karim made his debut on the France Championship. In the same year, he received the 2005 Meridian Cup.

In the 2006-2007 season, Benzema debuted in the national French football team and became irreplaceable in Lyon after he had scored 11 goals in 11 games. After such a resounding success, the talented young man got various offers from such high-level football teams as Real Madrid F.C., Juventus F.C., Liverpool F.C., and Arsenal F.C. However, Karim announced that he was going to win UEFA European Championship and that he would do it as a member of his home team. In 2008, Benzema participated in the group tours of the UEFA European Championship.

As a part of Lyon, he became the champion of France four times in a row as well as the best scorer of the championship of France of the season 2007/08. Benzema won the French Super Cup and UEFA Super Cup.

In 2009, Lyon could not raise their stakes to € 35 million offered to him by the Spanish football club Real Madrid and had to let him go. Benzema's salary was € 5 million a year, and the football's agent, Karim Jaziri, received 10% of the transfer money. In autumn of 2017, the contract with the Royal club was extended until June 2021. At the same time, according to French Football, the sum of compensation for the French under the new agreement amounted to one billion euros.

In 2010, during UEFA Champions League, Karim, as a member of Real Madrid, scored the 300th-anniversary goal of the club in the tournament. An even though Benzema's playing technique in his dream club is not always smooth and productive, head coach Zinedine Zidane stated that he was not going to part with the player. In the 2016/17 season, Karim scored every 170 minutes on average. As part of Real Madrid, the player realized the dream of winning the UEFA Champions League three times. Karim Benzema is the second player in history after Lionel Messi to score in 13 draws of the Champions League in a row.

During his career in Real Madrid, the striker was awarded the title of the champion of Spain and the winner of FIFA Club World Cup twice and has won the UEFA Super Cup three times. In the 2016-2017 season, the Frenchman played 48 games in all tournaments and scored 19 goals, giving nine assists.

Up to a certain point, Karim was the leader in the French national team. The central striker participated in all major international tournaments in which the national team played. In his homeland, Benzema was named the player of the year twice.

Unfortunately, Karim Benzema became notorious as the most infamous player in the history of football. In the spring of 2015, the player was fined, and his driver's license was got confiscated for breaking the speed limit. In May, Karim was caught driving without a license, and the same thing happened again in October.

Since October 2015, the leadership of the French national team canceled Benzema's participation in the games for the club after another scandal with another player – Mathieu Valbuena. This time the charges were much more severe – collusion with the purpose of blackmail. The case involved a video of an intimate nature. As a result, Benzema missed the 2016 UEFA European Championship, held in France.

Eventually, in July 2017, the judicial control measures established for the player were removed. In an interview with L'equipe, Karim expressed the hope that he would participate in the 2018 World Cup. But at the same time, he doubted that it was possible, while Didier Deschamps stood at the helm of the national team. Besides, for some time, Benzema was under suspicion in the case of drug trafficking called "Air Cocaine."

In his personal life, the striker also could not live without problems. At first, his career was threatened because of the connection with an underage prostitute Zahia Dehar. Benzema was threatened with a real sentence in prison. But the girl admitted that she deceived Karim and his colleague about her age, and had no claims for anything.

Then there was the news that Benzema used the services of a transgender prostitute Victoria and spent €8 000 on it. At the same time, the press learned that Karim did not bother to pay for the operation on his sick grandmother and refused to help his aunt.

Then Benzema began to change the girls like socks. In the list of girlfriends of the handsome football player (Karim's height is 6 feet 14 inches, and he weighs 174 pounds) appear some Chloe De Launay, who gave birth to Karim's daughter Mélia, singer Rihanna, model Analicia Chaves.

According to unconfirmed information, Benzema secretly married the French model Cora Gauthier, whom he met in December 2015 in Dubai. The family lives in a posh house in the exclusive Madrid neighborhood of La Finca. His wife gave birth to the football player's son, Ibrahim. Karim posts photos with children on his personal Instagram account.

There, Benzema boasted a new purchase, a personal aircraft Gulfstream G200 Business Jet. According to the ubiquitous journalists, the cost of such a "toy" varies from $4 to 20 million depending on the year of release.

Karim Benzema has a net worth of $40 million. In May 2017, the head coach of Real Madrid Zinedine Zidane posted a photo in support of Paris for the summer Olympic games in 2024 on his Instagram account. Besides him, the application was supported by the former coach of the French national football team Laurent Blanc, three-time Olympic champion Tony Estanguet and Karim Benzema.

In September 2017, the name of Karim Benzema appeared in police reports again, this time – as a participant in a road accident in Madrid. The Frenchman was behind the wheel of the Audi RS6 when his car drove into a Nissan Note.

Benzema together with his teammate Cristiano Ronaldo is included in the symbolic team of UEFA – 2017. Meanwhile, in 2018, Real Madrid received an offer from Arsenal to buy Benzema for €40 million. Paris Saint-Germain Football Club also wants to see Karim in their ranks.