Mohamed Salah is still young, but he has already managed to achieve improbable success in his football career. The famous clubs of the world wish to get this masterly player, and at his historical homeland, there exists a real cult of Salah. In Egypt, the young man is respected not only for his sports talents. Mohamed declared himself to be a generous patron.

A small Egyptian village Nagrig located near Alexandria is the homeland of the football player. The boy was born in a very poor family under the full name of Mohamed Salah Ghaly. In his childhood football became one of the entertainments for him as well as for every boy in the world.

Having watched enough Cristiano Ronaldo, Francesco Totti and Zinedine Zidane on the old TV which occasionally caught the signals of the sports channels, Mohamed together with his neighbors of the same age tried to repeat magic achievements of the kings of the game on the grass. However, his rural family had no money to buy a ball, so, it was successfully replaced by the socks curtailed and firmly stuck together in the lump.

Up to 10 years Mohamed comprehended the mysteries of the football on his own. Once the teenager was invited to battle in the school tournament where the talented rural guy was noticed by the scouts of the capital Arab Contractors F.C. (another title - El Mokawloon).

In such a way Salah had concluded his first contract. The way to his dream was hard to even in trifles – it took Mohamed four hours to get to his daily training and he had to make three changes on his way. It was necessary to sacrifice his studies at the school for which the boy was spending not more than two hours a day.

The persistence and diligence of the boy had quickly brought him results. In 19 years the young man already joined the primary team, and he finished the year 2010 with his first goal in the gate of the rivals of Al-Ahly F.C. Two years later the terrible scandal had burst out in the country, which entailed the suspension of all matches of the Egyptian Premier League: at the stadium in Port Said during the football tournament there was a bloody slaughter with the participation of fans. The sportsmen had to keep in shape only at the international competitions.

Mohamed Salah appeared at the football matches in the ranks of the primary national time of his homeland in 2011-2012, they played a series of friendly matches, and Swiss FC Basel turned out to be among their rivals. Egyptians defeated their opponent with the score 4:3. Mohamed impressed the representatives of Switzerland team with his double score so much, that they took the talented football player to their team at once, having offered him a contract for four years.

Of course, the Egyptian accepted this offer, he packed his things and in several days he already played in FC Basel. In the first match with the Romanians from Steaua F.C. Salah had got the ball into the goal. The Swiss thanked Mohamed for this great help in the victory of the national championship in August 2012 when the young man managed to participate in all the goals. The first ball had got straight to the gate of Lausanne team with his help.

The statistics of the goals of Mohamed Salah was promptly increasing. The football player didn't sit still, he changed football clubs as gloves. In 2014 he was running across the field in the blue Chelsea T-shirt – the British purchased the sportsman for 5,5 years. I spring he celebrated his first goal in the gate of Arsenal.

A year later the football player was rented by the team of Fiorentina F.C. The fans of the Italian club were happy and were ready to idolize the newcomer for the fact that he managed to win for the first time in 15 years the titled Internazionale in the match of the UEFA Europe League.

The Arab sportsman had held for half a year among the "violets", and in summer he already played for Roma which had rented him, having acquired the rights of the subsequent purchase. The young man presented his debut goal to the sports association in the match against Sassuolo F.C. A bit later he had defeated the gate of Bologna F.C. three times during the competition.

Mohamed has also made the international career. The football player presented Egypt at the Olympic Games-2012, however, the team was defeated in the quarter-final by Japanese. But before that, the young man managed to get the ball into the goal of four rivals. On the Cup of the Africa Cup of Nations which was taking place in Gabon in 2017, Salah won silver.

In the major of the interviews, Mohamed admits to the journalists that the main thing in his life is his family. The star of the African football married in the early age when he was 21 years old. He had chosen the girl called Maggi as his spouse. They celebrated their wedding in their native village – all the residents of the settlement gathered for the celebration concerning the wedding of their idol. The man is very religious therefore the celebration took place with strict observance of Muslim traditions.

Even their daughter, who was born a year later after their wedding, was called Makka by the football player in honor of the center of the pilgrimage of Mecca. Salah also demonstrates his religiousness at the matches, after each goal he praises Allah.

In the homeland, the sportsman has a reputation of the person with a big and kind heart. His childhood in poverty was left behind, and now his salary of 100 thousand pounds a week allows Mohamed to enjoy a good share of his resources. However, the young man helps his village in which he had grown up to get up from knees. There he built the school, he opened the center of youth on his own initiative and the indoor football field.

The loving couples are also grateful to the sportsman. Salah transfers money for weddings to those who aren't able to afford themselves a celebration. He also provides financial aid to the Fund of Football Veterans. In 2017 the man surprised the public with two generous acts.

In summer the house of his father was robbed, and the thief was caught without delay and the criminal case was started. Mohamed demanded to withdraw the claim, and handed a "lifting" to the robber and even found him a job. And in December he became the hero at the national level – he supported the Egyptian pound, having transferred 210 thousand English pounds to the state.

Mohamed Salah is an open person, he quietly shares news from his private and sports life on his page on Instagram.

In summer of 2017, Mohamed changed the football club again – from Roma F.C. he transferred to Liverpool F.C. which pursued him for €42 million. Salah told the press that already in his childhood he was a fan of the legendary English team and then he didn't believe in the truthfulness of the events occurring to him. He promised to do his best.

He had kept his word – in the first battle with Watford F.C. he scored a goal. In the Champions League, he distinguished with the series of scored balls, including the scores to the gates of Spartak and Seville. And at the end of autumn, the football player with the double to the gate of the national Congo team got the admission to the English club to the World Cup 2018.

In March he repeated Andrey Arshavin's record – in the match with Watford he realized the "poker", having got four balls to the rival's gate. That is to say, the goalkeeper of Watford passed each ball thrown by Salah. A bit later the forward of Liverpool managed to top Fernando Torres by the number of the scores in the debut season for "red", which reached the number of 36.

The sports biography of Mohamed was replenished by one more rank. This agile and skillful football player (Mohamed is 175 cm high and weighs 71 kilos) displaced the Gabonese Pierre-Emerick Aubameyang from Arsenal F.C. from the pedestal of the fastest player in FIFA 18, has shown the speed in 99 points (the former leader's indicator was equal to 98). 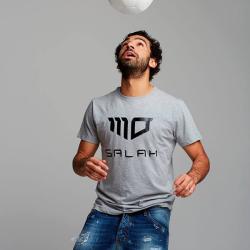