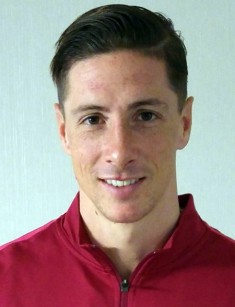 Fernando Torres is a Spanish football player. He is a forward of Atlético Madrid football club and a former member of the Spanish national team. Fernando is a world champion and two-time Europe champion. The fans know him by his nickname El Niño.

Fernando José Torres Sanz was born on the 20th of March, 1984 in the provincial town of Fuenlabrada close to Madrid. He was the third child in his family. José and Flori Torres already brought up his elder brother Israel and his sister Mari Paz. For his parents, little Fernando was a joy as he was a very quiet kid, in comparison with Israel and Mari who were standing on their heads in childhood.

When the boy was four years old, he got interested in football. Indeed, at first it didn’t look like a real game, but the boy was kicking the ball with great pleasure. His parents noticed their son's interest, and when he was five years old they sent him to his first football team "Park 84".

Fernando spent each minute running with the ball. However, while playing with his brother, he usually took the position of the goalkeeper. Once his brother Israel hit the ball so hard that Fernando left with two broken teeth. After this occasion, Torres decided to finish the career of the goalkeeper.

In 1991 he became the forward of Mario's Holland team. In 1995 Fernando joined Madrid Atlético F.C. It was the younger age group. At that time he turned 11. As Fernando Torres admits, his grandfather contributed to his choice of the club. He wasn't a football fan, but as soon as it concerned Atlético, the grandfather got just obsessed about it.

Fernando had his training in the suburbs of Madrid, in the Orcasitas district. It was quite challenging to get here form Fuenlabrada. Sometimes, his father had to ask to leave early from work to bring his son to the football training. Fernando's mother also took an active part in this.

But with his father, they were driving here by car, and when he got here with his mother then it took much more time – at first, they took the bus, and then a commuter train. His elder brother and sister often accompanied him to his training and on his way back. So all family members have contributed to his success. Fernando repeatedly told in his interviews that he would never become the professional football player if it were not for his parents.

In 1999 when Fernando Torres turned 15, he concluded his first professional contract. The guy became the reserve player of Atlético. In 2001 he began to play in the primary team. During the first season in the highest division Torres has scored 13 goals, and already in the season 2003-2004, he became the top scorer of the team. At the same time, Fernando became the captain of the time, at that time he just turned 19 years.

Despite excellent physical appearance (his growth is186 cm, and his weight is 69 kilos), Fernando has quite child-like facial features. It’s possible that it became the reason for the football player's nickname - El Niño that in translation from Spanish means "a child". Despite such a nickname, the football player has shown excellent results. The football player became the ideal goal scorer both for Atlético Madrid and for the Spanish national team.

In 2007 Fernando Torres got an impressive offer from the English Liverpool F.C. He was waiting for the changes for a long time. That’s why even though this decision was somewhat difficult for him, he left his native club and moved to England.

In the first season, Torres scored 24 goals in Premier League. Thus, he beat the record of the foreign debutant by the quantity of the goals. He has successfully played for two years in Liverpool F.C. Unfortunately, during the season of 2010-2011 his results have worsened as he missed many games because of his trauma.

In January 2011 Liverpool football club sold Fernando Torres to Chelsea for £58,5 million. At that periodof time, it was the most expensive transfer for the club. They offered El Niño a salary of £175 thousand a week. Being a part of Chelsea F.C. Fernando became the owner of FA Cup and also won the Champions League and the UEFA Europe League.

In 2014 Torres transferred to Milan F.C. on the rent license. At the end of the year, it became known that the forward had returned to his native Atlético Madrid football club. In May 2015 he became the Best Team Player according to his fans.

At La Liga - Championship of Spain of the season 2016-2017 Torres fell after the collision with the rival and hit his head so hard that he even fainted. Later it appeared that the trauma wasn’t severe, though he had frightened everybody.

As a member of the Spanish national team, Fernando Torres became the world champion and two-time Europe champion.

Every coming year the forward's statistics declines. More and more, Fernando appears on the bench. For the last six years, his transfer cost decreased considerably. The rent agreement both with Atlético and with Milan football clubs will expire in June 2018.

The football player got acquainted with his wife Olalla Domínguez in his childhood. They got married in 2009. The loving couple preferred to register their marriage officially. Soon his wife gave birth to his daughter Nora, and a year and a half later their son Leo was born. When the young father took his firstborn in his arms, he told the journalists that it was his best trophy. In 2015 Torres became a father for the third time – his wife gave birth to their son.

The football player doesn't post his family photos on Instagram. His wife Olalla does this instead of him – there is a significant number of home pictures with her children and her husband on her page in the social network.

As well as other football players, Fernando Torres concludes advertising contracts. He took part in the commercials for Pepsi and Samsung brands. Also the forward appeared in several documentaries about football.

In 2009 he presented his autobiographical book "El Niño. My Story".

In 2018 the football player announced that at the end of the season he was going to leave Atlético Madrid. He didn't tell about his plans, but he claimed that he didn't want to transfer to any other Spanish club.

In April 2018 his agent Antonio Sanz commented on the forward's leaving from Atlético. By his words, Fernando would stay neither in Spain nor Europe. He didn't tell any specific details, but he hinted that it could be the USA or China. 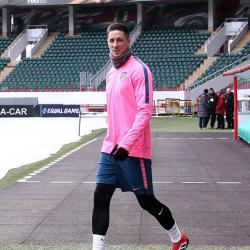