Stanislav Cherchesov is the Russian coach who used to play for Russian and foreign clubs and Soviet and Russian national teams.

Cherchesov was born in North Ossetia into the large family. He is an Ossetian, but there is no exact information about his belief. In his interviews, Stanislav Cherchesov mentioned he respected shariah and Caucasian traditions, but he did not identify himself as a follower of any religion.

Stanislav’s father worked as a bus driver. The boy had four sisters.

Stanislav Cherchesov got interested in soccer early. At the children’s sports school, he became the goalkeeper at once, but he also performed functions of a forward until he finished the school. The teenager grew up fast which was the advantage for him (Cherchesov’s height is 183 cm.).

At 18, the young man joined the main team of Spartak Ordzhonikidze; three years later, he demonstrated his talent and joined the Moscow team. Stanislav became the back-up goalkeeper of the famous sportsman Rinat Dasayev. He rarely appeared on the field; only in 1989, after a one-year loan by Lokomotiv, Stanislav became the first eleven member.

Later on, the player joined Dynamo Dresden and Tirol Insbruck where he finished his field career. While the man used to make some mistakes at first, he gained much experience in the course of time. In the 1990s, he was notable for his quick decision-making, prompt response, and thorough analysis of his own errors.

Besides, the goalkeeper stood out for his incredible will and belief in himself. When the sportsman played for Tirol, he had to appear on the field, injured. The game worsened the trauma, and he had a cartilage replacement surgery. Doctors who treated Cherchesov were sure that taking up sports would be impossible after such a trauma. The Austrian club did not consider the player capable of anything.

In spite of all these ordeals, Cherchesov began to train hard; he clenched his teeth and ignored pain. As a result, he returned to soccer and, moreover, became the country’s champion. The Russian goalkeeper was awarded the special prize for the come-back of the season.

Cherchesov played for his national team for a long time. Besides, he is still the oldest national team member: he participated in his last match when he was 36 years and 174 days old. The goalkeeper was included in the FIFA World Cup-2002 application, but he did not play in any game.

As soon as Cherchesov finished his field career and received the necessary education to get the coaching license, he started working for Kufstein and later Wacker Tirol.

In 2006, the coach returned to Russia to join Spartak Moscow. That work was ambiguous: on the one hand, he was the most successful coach after legendary Oleg Romantsev left the club and won silver medals of the Premier League. On the other hand, the Moscow team was painfully defeated by CSKA and Dinamo Kiev; in addition, Cherchesov put fans’ two favorite players, Yegor Titov and Maksym Kalynychenko, to reserve. These events did not make the Ossetian coach popular.

In a while, Cherchesov worked with Zhemchuzhina-Sochi, Terek Grozny, Amkar Perm, and Dinamo Moscow. He had many considerable victories with these clubs.

In fall 2015, Cherchesov was appointed the head coach of the Polish club Legia. In a season, he helped the team return its leading positions and made the gold double: Legia won both Ekstraklasa and Polish Cup.

Nevertheless, on June 1, 2016, the administration of Legia and Stanislav Cherchesov decided to stop their cooperation. Their different views on the further development of the club was the reason for that.

In August 2016, it was announced the ambitious professional took the position of the Russia national team head coach. Before, Russia failed to win at the European Championship group stage. Cherchesov agreed to prepare the team for the domestic national championship and signed the agreement which would expire right after the end of the event.

On August 31, 2016, the national team had its first match under Cherchesov’s guard. In the game against Turkey, there was a draw (0-0). The next matches were of the mixed success. Russian players also played friendly games with average teams who had the similar FIFA ratings as Russia. However, the players’ results were not stable.

In September, Russia played with Ghana and won (0-1). The next two matches were lost: Costa Rica and Qatar defeated the national team with the corresponding scores 3-4 and 1-2. Five days after the latter match, the Russians won the game against Romania with the score 0-1.

Domestic championships imply the host did not have to take part in qualifying matches. Coupled with these swing-like results, Russia placed 53rd in the FFIA rating which was the recording low position of the country. In November 2016, this anti-record was broken: Russia was number 55; in December, it was number 56.

In 2017, the Russia national team continued to play friendly games against mid-range team, and the results varied again. In that year, the team took part in the FIFA Confederations Cup.

In this tournament, Russia’s start was impressive. The first game against New Zealand brought the victory (2-0). However, two following matches against Portugal and Mexico were unlucky; the team lost and left the championship.

Stanislav Cherchesov has been married for a long time. His wife Alla is the teacher of English. There are two children in the family: the daughter Madina and the son Stanislav. The boy who is the father’s namesake has made the decision to follow in the footsteps of Cherchesov. The young man used to be the goalkeeper in Dinamo Moscow; today, he is the goalkeeper in Chernomorets Novorossiysk.

As Alla and Stanislav’s children grew up abroad and their mother is the teacher of English, both of them speak fluent Russian and Ossetian and advanced German, English, French, and Italian.

Stanislav Cherchesov does not smoke and does not drink much. He is a calm person and never raises his voice during practice or games. Moreover, those acquainted with him know his anger manifests itself when the man lowers his voice and starts whispering: it means he is absolutely furious.

To relax, Stanislav Salamovich does crossword puzzles. He likes to do it on board the plane.

People often look for Cherchesov’s Instagram page, and journalists even doubted he knew about the platform. When reporters asked him directly, he said he knew about Instagram. He added he was trying to keep pace with the times and even bought a smartphone. However, he believes Instagram is a stupid activity he prefers not to undertake.

In June, the FIFA World Cup games took place. Cherchesov’s team won in the opening match against Saudi Arabia with the score 5-0; the victory over the Egypt national team followed (3-1). The game against Uruguay determined the leader within the group; it was challenging for Russia. On June 25, Uruguay defeated the national team with the score 0-3. Despite the failure, Russians reached the 1/8 final for the first time in recent years.

The 1/8 opponent was powerful: the Spain national team. At first, the ball ricocheted from Sergei Ignashevich’s leg, but at the end of the first time, Gerard Piqué played with his hand, so that there was a penalty; Artem Dzuyba did everything spotlessly. The Spanish were pressing Russia throughout the whole game, but the Russian defense was bullet-proof. The match finished with the post-game penalty series where Igor Akinfeev’s skills proved to be better than those of David de Gea.

For the first time in its history, Russia reached the 1/4 final of the FIFA World Cup. Fans could not wait to see the match against Croatia. The game was notable for the dynamics, numerous dangerous moments, and beautiful goals. Denis Cheryshev scored a goal; the Croatian team scored two goals in return. Mário Fernandes’s head goal led Russia to the penalty series where Croatia proved to be stronger.

Although the Russia national team left the championship, fans and the whole soccer world called Cherchesov’s team the best in the recent decades. 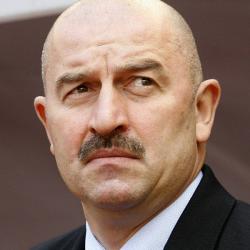