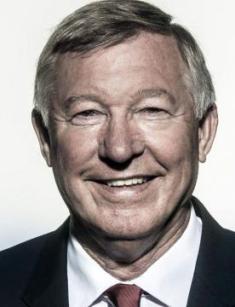 Alexander Chapman Ferguson is known to football fans as Alex Ferguson, Sir Alex, the legendary coach, the most titled in the history of British football. In 1999, Queen Elizabeth II knighted him and he was included in the Hall of Fame three years later. Ferguson is on the list of ten UEFA trainers, who contributed to the development of football.

Alex was born in Glasgow, Scotland. His father Alexander Beaton worked as an apprentice at the local tinsmith-shipbuilder and his mother Elizabeth was engaged in housekeeping and education of Alex and his younger brother Martin. They lived in an apartment building, so there were a lot of boys, with whom Alex played football in the yard all the time.

Ferguson wanted to become a football player since childhood. He began to train regularly. And Alex went on the field as a part of the team Queen's Park at the age of 16.

Alex was engaged in trade activities and worked as an assistant to the toolmaker at the shipyard and played football at the same time. He was removed continuously from the main cast for this reason.

In 1960, he was in the team St Johnstone, joined Dunfermline Athletic Football Club after four years. His professional career began in this team. He became the best striker in the Scottish championship.

In 1967, Rangers Football Club bought Alex Ferguson. In 1969, he was accused of the defeat of the team because he missed a goal in the Scottish Cup Final. He was transferred to the youth team of the club for this reason.

In October 1970, Nottingham Forest Football Club offered Alex to sign a contract for the transition but his wife was categorically against moving to England, so he was forced to refuse. Ferguson began working as a playing coach for Falkirk Football Club.

In 1974, he finished his football career at Ayr United Football Club and started working as a trainer. The players of East Stirlingshire F.C. were his first players, Ferguson showed himself as a supporter of strict discipline. He became the trainer for St Mirren Football Club soon. He managed to bring the team from the outsiders of the second division to the winners of the first division for four years.

The first years in this position were challenging and unsuccessful for Ferguson. The team lost all the time. He tried to justify their bad game, for which he soon received an unfortunate nickname from the fans. But everything changed quickly. In 1990, Manchester United Football Club won FA Cup Final.

As a result, Alex Ferguson became the 5-time winner of FA Cup Final for 27 years of coaching. He became the champion of England 13 times, the winner of Champions League two times, won English Football League Cup 4 times. He was a winner of the Intercontinental Cup and the UEFA Super Cup.

Alex Ferguson showed himself as a strict trainer during this time. He is also known for his love of strong words. In 2003, he had a conflict with David Beckham in the locker room, the coach was not satisfied with his game and he threw boots at him. The shoe hit the face of the football player and David got a cut. As it turned out, it was an accident, he kicked the boots angrily and hit David. Ferguson apologized and the football player accepted his apology.

He said that the results of the draw of the Champions League were faked, he was later issued a fine of 10 thousand Swiss francs for that. It is not the only scandalous situation with Alex Ferguson. He always criticized the arbitrators, using offensive language, for which he was disqualified and fined repeatedly.

In 2013, Manchester United Football Club was the winner of the Premier League 13 times. And Ferguson was recognized as a coach of the year in the Premier League 11 times at the end of the season. Sir Alex announced his resignation from the coaching position of the team the same year.

He became a trainer of the month dozens of times during his football career. He is a three-time winner of the Onze d'Or. According to the versions of various associations and football federations, he was repeatedly named a trainer of the year.

In 2014, Alex Ferguson published his autobiography and he wrote a book on leadership in 2015. He talks about the principles of a true leader in this book.

He first met his wife Cathy Holding at a trade union event in 1966. They got married the same year. In 1968, their first-born son Mark was born. In 1972, there were twins Darren and Jason in the family.

Darren followed in his father's footsteps. He works as the head trainer for Doncaster Rovers Football Club.

In addition to football, Alex Ferguson is a fan of racing. He is a frequent "guest" at the racetracks. He sits with the Royal families and millionaires. The trainer bought a horse for 120 thousand pounds and joked:

"It runs better than Beckham or Verona and is worth cheaper!"

Alex Ferguson continues to work for Manchester United Football Club. He is the club Ambassador. His salary is 2 million pounds. The team can use the services of Ferguson 20 times a year. Alex Ferguson has a net worth of $60 million.

He also collaborates with Harvard Business School, where he sometimes lectures.