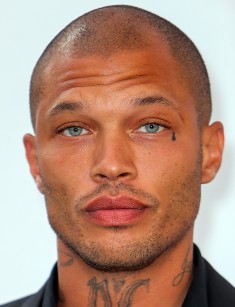 Jeremy Meeks is that handsome man who turned from the prisoner of the American prison into the star of the fashion industry in a couple of months. His history confirms once again that anyway the appearance of the person plays an important role in the achievement of success.

You can hardly find a lot of biographical details of "the most beautiful criminal" that are publicly available. He was born in February 1984 in the Californian town of Stockton. Except for Jeremy, a boy and two girls grew up in his family. Jeremy spent his young years under the care of his sister Michelle as, according to some information, his mother Katherine Angier wasn't a law-abiding person and was a drug addict. His father also was in conflict with the law. His brother also had problems with the law.

Strangely enough, but enterprising reporters are more interested in career achievements of Jeremy than in looking for details of his private life. Therefore, the information on the first and the second mentioned moments are extremely different. Nobody can claim with an accuracy the nationality of Meeks. As well as it is unknown whether the guy attended the educational institutions and where and how he had been spending his spare time.

Jeremy was born in the town of Stockton which is among the leaders in the USA’s crime rate. To a certain extent, this mentioned fact and also his family atmosphere, explain the rich track record of the young man which could do the honor to any mediocre gangster.

Meeks is known to the California police since the beginning of 2000, moreover, he is considered to be the member of the large criminal community. For the first time, the handsome man was arrested for the attack on the teenager. Subsequently, his meetings with the police became regular. The future star of the podiums was also caught on robberies and resistance to arrest, theft and identity theft, driving without a license and fraud.

During the fatal summer of 2014, Jeremy was driving a car which was stopped by the police officer. As it appeared later, the policeman had confused Jeremy with the member of the gang by mistake. And everything would be alright, but the police officer found marijuana at him during the search and in his car’s trunk he found the whole armory of the weapon for which Meeks hadn’t got a permission.

Subsequently, the law and order guards posted Jeremy's photo on the page of "Facebook", and according to some other sources – on the official site of district police department. The criminal appeared at the court already in the status of the Internet star.

On the wave of her son’s popularity Jeremy’s mother created a web page where she was raising money to pay for the lawyers and for the release on bail. Having been sentenced to the punishment of 2-year imprisonment, in March 2016 Jeremy was released on parole for his good behavior. But before the full termination of the sentence, he was forbidden to take part in the shootings and to give interviews.

Jeremy had a wife Melissa. The couple was bringing up their son, Jeremy Jr., and two children of Melissa from her former marriage. His wife, perhaps, is the only person who hadn't been delighted with the popularity which had fallen upon her family.

Besides, after the release from the prison Meeks, apparently, decided to enjoy the bonus which was due to him. The man became a regular visitor of secular parties. And the newspaper’s headings were hit with the messages that the charming criminal had left his wife and children because of the successor of a billion state - Chloe Green.

Chloe is a daughter of the British businessman Philip Green, the owner of Topshop brand, and his wife Tina is the owner of the Arcadia Group company. The assumptions of Jeremy’s serious intentions were amplified after the occasion when the couple accompanied by Tina Green appeared at the charitable evening of Monte-Carlo Gala for the Global Ocean, and then went to the formal reception to the Prince of Monaco.

Melissa had run out of patience and she announced that she was going to file for divorce. However, according to some media, Jeremy was the first to process the documents and he also didn’t forget about the division of property. And they really had something to divide: on Instagram, the model posted a photo in the background of the mansion and an expensive car.

Moreover, the wealthy girlfriend of the model appeared to be an extremely jealous person. The Internet portals give a case with the model Bar Refaeli as a proof. The girl acted with Meeks in the advertisement of Carolina Lemke glasses and posted the video from the shootings in her personal account. It is unknown what Chloe had seen in this video but she came to the shooting stage and was furious and made it known that she Jeremy was her boyfriend.

Perhaps, Jeremy Jr. will also be successful in model business. In any case, the joint photo of the son and father is posted on the official site of the supervising agency. There are no official comments neither from the agency, nor from Meeks, but the followers left a number of enthusiastic compliments.

For the first time, athletic, dark-skinned, blue-eyed and high (Jeremy's growth is 183 cm) handsome man appeared on the podium of Milan Fashion Week. Only several weeks had passed between his release from the prison and his appearing on the podium.

The appearance of the former convict during New York Fashion Week in February of 2017 was not less triumphal. The tattoos of Meeks perfectly fitted the style of Philipp Plein’s collection. The same specific tattoos don't give police the grounds to stop observation of Jeremy as the policemen continue to suspect the guy of belonging to the local "Crips" gang.

In the breaks between communication with the celebrities, fashion displays and shootings for the glossy magazines, Meeks travels, improves his acting skills, lifts weights in the gym and step by step gets rid of his tattoos.

When the guy was released from the prison, he said that he decided to give up his criminal past, and he still keeps his word. But the handsome young man has partially forgotten about his father's duties: from Melissa's interview to the "British Daily Mail", it became clear that Jeremy ceased to pay alimony for his son.

In January of 2018, Jeremy accepted Olga Buzova's invitation to take part in her song video for the track - "Wi-fi". Meeks was also seen in the company of Victoria Bonya. 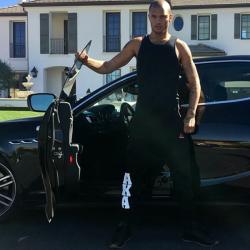