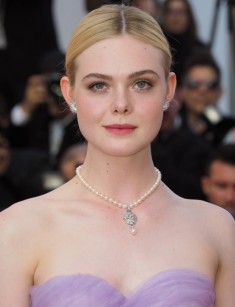 Elle Fanning is the American actress who had the impressive 30-movies filmography by 18. The actress starred in The Curious Case of Benjamin Button, Super 8, and Maleficent.

The future star was born on April 9, 1998, in Conyers. Although her name was Mary Elle, the girl liked its second part more. Later, she chose it as her stage name.

Elle’s parents used to be athletes. The mother was a tennis player, and the father played baseball; later, he began to sell electronics in Los Angeles. The actress Dakota Fanning is Elle’s elder sister. Dakota has participated in movies since five, and Elle followed her example at three.

The young woman says her family has always been artistic. The parents pampered their daughters, and their toys were scattered everywhere. The sisters Fanning considered their parents’ house the heaven.

The sister’s careers were connected at first. Sean Penn noticed the talented girls during the auditions for the movie I Am Sam and offered Elle and Dakota the role of his character’s daughter at different periods.

The movie tells the story of a mentally challenged man who tries to gain custody of his daughter. The audience enthusiastically welcomed the movie. Sean Penn was nominated for the Academy Award, and other actors received fans’ admiration.

The next year, Elle appeared in the series Taken and got her first independent role in Daddy Day Care. As the latter was premiered, critics recognized Elle Fanning as a talented actress.

In 2003, the girl participated in the movie The Door in the Floor and collaborated with many Hollywood stars. Fanning played two roles simultaneously: the twin sisters one of which died. Jeff Bridges and Kim Basinger played the girls’ parents who were going to divorce after one child’s death but found the strength to live together for the sake of the remaining daughter.

In 2002, Elle played in the movie Charlotte's Web, but when the movie was edited, the moments with her were cut out. Several months later, the young actress played Debbie Jones in the Academy-Award-winning drama Babel. Brad Pitt and Cate Blanchett took the roles of the girl’s parents. Elle had another chance to work with them: the movie The Curious Case of Benjamin Button telling the story of a man who was born old and was getting younger each day. Fanning got the role of small Daisy, Blanchett’s character.

2006 began with the movie The Nines followed by Déjà Vu. The same year, the girl was offered the role in the series The Lost Room.

2010 brought Sofia Coppola’s Somewhere about the reckless life of the Hollywood actor Johnny Marco (Stephen Dorff) and his daughter who was looking for her father. The drama won the Golden Lion award for best picture at the Venice International Film Festival. Elle Fanning earned $125 thousand for this project.

The famous director remembered the actress and invited her to her project again in 2016. At that time, Fanning joined the leading cast: Colin Farrell, Kirsten Dunst, and Nicole Kidman. The premiere took place in May 2017 at the Cannes Film Festival.

In 2011, Elle Fanning appeared in the legendary director Francis Ford Coppola’s movie Twixt. The young actress got the role of Virginia who had been murdered and whose ghost triggered the crime series investigation.

Year by year, Elle Fanning’s career was developing. By the late 2000s, she became one of the most popular underaged actresses. She participated in the movies We Bought a Zoo and The Nutcracker in 3D; both movies were popular outside America. In 2011, the girl worked on Steven Spielberg’s Super 8 and played Alice, one of the main characters.

In 2014, Elle Fanning and Angelina Jolie co-starred in Maleficent: Elle played young princess Aurora while Angelina transformed into the evil fairy Maleficent. Jolie and Pitt’s daughter, Vivienne, debuted in this movie as Aurora in her childhood.

Nowadays, young Elle Fanning does not think about marriage or dating someone. She participates in photo shootings for glossy magazines: with her beauty and height, she could make a modeling career. Still, Elle says she does not see herself anywhere but cinematography and continues to share her best photos on her Instagram page.

Elle Fanning is a photogenic woman, and not only modeling managers but also directors noticed that. In 2016, the actress was offered the lead role in the thriller The Neon Demon where Fanning played a beginning model who had to face the cruel world of competition.

In comparison, Elle does not want to appear on a runway. The young woman likes ballet, and she gladly accepted the offer to voice the main character, Félicie, in the animated movie Ballerina; Fanning successfully expressed all the emotions.

In 2017, the movie Mary Shelley was one of the most exciting projects for the actress. Created by the first Saudi Arabian female director, the drama tells the story of the first feminist in early-19-century England.

In 2018, the premiere of the fantastic drama I Think We're Alone Now took place. This is a story about two people, the young woman Grace and a dwarf Del (Peter Dinklage), who stay alone after the miraculous rebirth of the world. The premiere of A Rainy Day in New York starring Fanning is also expected.

The shooting of the crime movie Galveston has finished. Fanning’s character has to hide from the angry mafia members.

There is one more project, the now nameless movie by Woody Allen, where the actress will participate. Selena Gomez and Timothée Chalamet will become her stage partners.