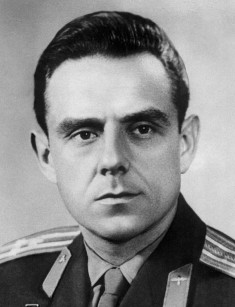 Vladimir Komarov’s biography is a vivid example that any person can stay persistent and achieve his goals. The son of a Moscow yard-keeper pursued his own dream and flew in space twice. By the age of 40, the man had a family, developed a dizzying career and was praised by Yuri Gagarin and Alexei Leonov.

The future hero of the Soviet Union Vladimir Komarov was born in Moscow on March 16, 1927. The boy's parents Mikhail Yakovlevich and Ksenia Ignatyevna lived on Third Meshchanskaya Street.

Since youth, Vladimir dreamed of the sky. The child spent a lot of time on the roof of his house, playing with paper airplanes. It is possible that the passion for flying was the result of an interesting acquaintance. Boris Nikolayevich Yuryev, the creator of the helicopter, lived in the same building. He liked to talk with the teenager.

Vladimir did not think about the space during his first years of aviation service. After a long training Komarov was sent to Grozny, where the man began the career of a military pilot. Two years later, Vladimir was already promoted to the rank of a senior military pilot, and he returned to Moscow. Komarov enrolled at the N.E. Zhukovsky Air Force Engineering Academy to achieve his goal to become a test pilot.

The leadership of the institute noted the persistence of the military officer in achieving his goal. Immediately after graduation, Vladimir was offered a position at the Central Scientific Research Institute at Chkalovsky. The ability to organize testing attracted the attention of the commission that selected cosmonaut candidates.

Although the Institute had a staff complement, Vladimir was invited to participate in the secret process. Komarov did not refuse, and in June 1960 he began to study new disciplines. Vladimir became a close friend of Yuri Gagarin during preparation and training. The cosmonauts’ friendship was so close that Gagarin remembered and supported his colleague's family even after Komarov's death.

However, despite the good conditions and professional approach, Komarov was not chosen in the top six candidates for the flight. Vladimir could get into the group that was supposed to fly in space on the spacecraft Vostok by accident. Doctors forbade Grigori Nelyubov to participate in the final training, although he was already approved for the mission.

However, Komarov could not fly in space on the Vostok. In September 1963 the program was suspended. At that time, doctors revealed Komarov’s heart irregularity. The leadership wanted to pull Komarov from the program, but the cosmonaut persuaded the authorities to give him a chance.

The man went to cardiologist Vishnevsky, who worked in Leningrad. The doctor confirmed that heart irregularity did not have fatal consequences. When Vladimir visited the doctor, he spent a lot of time with Vishnevsky's little patients. The cosmonaut encouraged kids in every possible way and told children about the space.

Vladimir Komarov first flew in space on October 12, 1964. Boris Yegorov and Konstantin Feoktistov joint Vladimir on Voskhod. The flight lasted 24 hours 17 minutes. There was no space for spacesuits and jettison devices in a small cabin.

After the success of the flight, Vladimir was awarded the title of Hero of the Soviet Union. The man was awarded the Gold Star, which is now exhibited in the Central Armed Forces Museum.

The cosmonaut met his future wife in Grozny in 1949. The man saw a portrait of a girl in a shop window. Komarov was mesmerized by the charm of the beautiful lady and he asked the photographer for a long time, who was depicted in the picture. But the photographer knew only that the girl was a student at the Pedagogical University. The military officer would find out later that the beautiful lady’s name was Valentina.

Vladimir spent his free time together with a friend near the University until he met the girl in the picture. The future hero of the USSR brought scarce chocolate bars to meetings instead of bouquets of flowers. The young people got married six months after the first date.

First, the couple had a son. The boy was named Yevgeny. Eight years later, daughter Irina was born. After the death of her husband, Valentina did not marry again, focusing on the upbringing of her children.

Shortly before the 50th anniversary of the Great October Socialist Revolution, the authorities decided that they should please the citizens with another achievement in space. Vasily Mishin, Sergei Korolev’s successor, was responsible for the new record.

It was decided to launch two spacecraft into space and conduct a space docking. After the first stage, the cosmonauts were to move from the Soyuz 2 (the so-called second spacecraft) to Soyuz 1, where Komarov was. The authorities neglected pre-flight testing in order to manage to do everything in time. The designers identified 203 failures during the tests but chose to hide them.

Vladimir orbited Soyuz 1 on April 24, 1967. The failures became vivid immediately after the beginning of the flight. When the leadership realized that the first ship could not cope with the task, they did not give permission to launch Soyuz 2.

They attempted to return Komarov to Earth for several hours. The spacecraft was circling in space, Vladimir could not orient and take any action. The experienced cosmonaut took manual control of Soyuz 1 and could start braking and landing.

All participants could calm down. It seemed that the worst was over. Komarov even reported to the Mission Control Center that he felt good, and he was in the projector, wearing a seatbelt. These were the last words of the cosmonaut.

New problems began when he was 7 km from the Earth. The braking parachute failed to deploy, and the reserve parachute twisted the lines due to the constant whirl. It was impossible to reduce the speed when Komarov approached the Earth. The module crashed in the Orenburg region, not far from Orsk.

When Soyuz 1 crashed into the ground to a depth of 0,5 m, it began to burn. The cause of the fire was carbon dioxide in the module. The fire and the explosion were so strong that all astronaut's remains could not be found.

Officially, Vladimir Komarov’s ashes were interred in the Kremlin, but people come to a small hillock located in the steppe of the Orenburg region to pay the tribute to the memory of the hero of the USSR. It is easy to find the place as colleagues of the cosmonaut planted a birch grove near the place of tragedy. 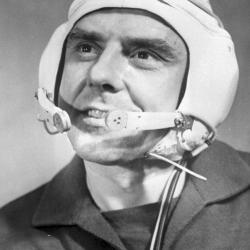