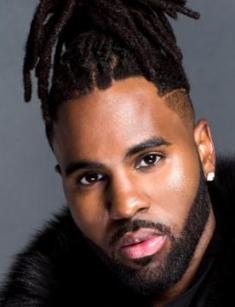 Figures do not lie: the singer, songwriter, and dancer Jason Derulo is one of the bestselling pop artists today. He began to write lyrics for Lil Wayne, Pitbull, Diddy, and other singers five years ago and sold more than 50 million copies of his singles worldwide. Besides, the man can boast more than two billion views on YouTube and one billion Spotify plays; he is notable for his talent to find new approaches to well-known tendencies.

Derulo’s hard work has brought to life eleven singles that made him immensely popular; "Want to Want”, “Whatcha Say”, “Ridin Solo”, “Do not Wanna Go Home”, and “The Girl” are some of his hits that topped music charts four times. More than 17 million people made his radio audience, and 20 million Internet users follow him in social networks.

Jason’s talent has been appreciated by music experts. He has won five BMI Pop Awards and BMI Pop Music Awards for Songwriter of the Year in 2011, as well as three Teen Choice Awards. His achievements include MTV Video Music, MTV Europe Music, ARIA, NAACP Image, and MOBO Awards.

Jason Joel Desrouleaux was born in Miami, Florida, on September 21, 1989; other sources give Miramar as the birthplace. The future musician’s parents came from Haiti; there is little information about them on the Internet. Jason was not the only child: he had an elder brother and sister.

As the young man took the first steps in the world of music, he got the stage name “Deluro” which was more natural to Americans.

The boy was artistic and had many interests. The five-year-old child received small parts in theater performances; he created the first song “Crush on You” at eight. The king of pop music Michael Jackson was his icon; later, Deluro was also inspired by Justin Timberlake and Usher. The young man mastered his vocal abilities in artistic schools of Florida.

In addition to acting and music, Jason was fond of dancing, opera singing, and ballet. When he had spare time, he played basketball with his friends.

Further on, Jason attended the New Orleans Art Center; he got his higher education at The American Musical and Dramatic Academy.

The young man created the song “Bossy” for a New Orleans rapper Birdman; it was the first step toward success.

Jason started his show-business career as a songwriter; he wrote songs for Diddy, Donnie Klang, Sean Kingston, and Lil Wayne. Still, the young man dreamed of solo performances and polished his singing and dance skills in a vocal school. He also participated in theater plays Ragtime and Smokey Joe’s Café.

In 2006, Derulo won the prize in the TV program Showtime.

The producer J.R. Rotem, discovered the artist and invited him to his label, Beluga Heights Records, and Warner Brothers Records. In his interview to Hit Quarters, Rotem emphasized Jason’s inclination to art:

“Jason Derulo has one of the most impressive work ethics I’ve ever come across – he just keeps knocking out songs in the studio. That's an amazing quality”.

August 4, 2009, brought the debuting single “Whatcha Say”. The track began from the 54th position in Billboard Hot 100 at the end of months and climbed higher to reach the leading status in November. The music video for this hit came out in September; the musician started working on his first album at the same period.

Jason Derulo was released on March 2, 2010, and got into the top ten in Great Britain and Ireland at the beginning of March. The third single, “Ridin Solo”, was presented on April 26 and reached the ninth place in Billboard Hot 100 by July.

The next year, Derulo collaborated with Demi Lovato and presented the track “Together” for her album Unbroken (2011). The man’s second studio album appeared on September 27, 2011; the supporting single “Do Not Wanna Go Home” preceded it on May 20. Derulo shared a series of videos on the official website and showed how the recording process took place.

The disc topped British and Australian music charts. The singer was going to have an eight-day tour in Great Britain in February 2012; one of the shows was going to be held at the Wembley Arena on March 1. However, on January 3, 2012, Jason had his neck bone broken during a rehearsal; the tour had to be canceled.

On March 28, 2012, fans could see Derulo in American Idol; the artist addressed the audience and asked for their assistance to finish the lyrics of the new song, “Undefeated”. Many people presented their own versions and voted. On May 5, 2012, Jason said his first TV performance after trauma would take place at the final of American Idol, on May 22, 2012.

In August, the singer appeared in the first season of the Australian talent show Everybody Dance Now along with Kelly Rowland. The project was closed after the fourth episode due to the low ratings.

The single “The Other Side” was premiered on April 16, 2013; it reached the 18th place in Billboard Hot 100. Soon, Jason announced the third album Tattoos. Six months later, a special version Talk Dirty for the United States came out: it included four new tracks and seven hits from Tattoos. The design of the renamed work was also different.

On November 21, 2014, Pitbull, Jason Derulo, and Juicy J presented their collaboration “Drive You Crazy” from the album Globalization.

On January 22, 2015, Dick Clark Productions revealed that Derulo was going to be a jury member in the upcoming season of So You Think You Can Dance with the new judge Paula Abdul and Nigel Lythgoe.

“I am truly excited, and eagerly look forward to joining the cast of So You Think You Can Dance”, the musician told journalists.

On March 9, the singer presented the single “Want to Want Me” from the future fourth album Everything Is 4. It became the most popular track in the history of the Top-Top radio; it also enjoyed the fifth place in Billboard Hot 100 and topped the British chart.

June 30, 2015, was marked with the premiere of the video “Cheyenne”; it was also the second single. The song “Get Ugly” was equally popular and made the artist popular beyond the USA. Soon, Derulo announced the disc with his best works, Platinum Hits. It came out on July 29, 2016, and contained a new song “Kiss the Sky”.

Jason Derulo used to date the singer Jordin Sparks for three years; they broke up in September 2014. Later on, Daphne Joy became his girlfriend.

Daphne’s appearance at New York Fashion Week provoked a scandal: the celebrity appeared almost naked in her dress. However, the singer did not mind and proudly posted her photo on Instagram.

This relationship did not last long: Joy and Derulo split up in 2016.

On March 3, 2017, Jason presented the single “Swalla” with Nicki Minaj; another collaboration with Pitbull brought the song “Educate Ya” from the album Climate Change.

On March 31, Cheyenne Frontier Days announced the artist’s participation in 2017 Frontier Nights. The fifth studio album 777 was released in 2017; the new work, 2Sides, is going to be presented in 2019.