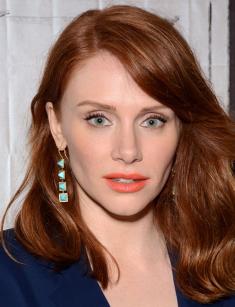 The future celebrity was born in Los Angeles on March 2, 1981. The girl was destined to choose acting: she grew up in an artistic family. Her father, Ron Howard, is a great movie director, scriptwriter, and actor; the man has won the Academy Award twice. His movies Apollo 13, A Beautiful Mind, and The Da Vinci Code are immensely popular.

The girl’s mother was the writer Cheryl Alley, and her grandparents were also famous: the actors Jean Speegle and Rance Howard.

Bryce was the first child in the family, and the parents had to take her to movie sets. Later, they tried to keep away their other children, the twin girls Paige and Jocelyn and the boy Reed, from show business.

Bryce decided to become an actress at school. When she was in the ninth grade, she played Adelaide in the musical Guys and Dolls. She used the name “Bryce Dallas” to avoid associations with her famous father.

In 1999, the young woman graduated from Byram Hills High School; at the same time, she attended a special art camp together with her friend Natalie Portman. In 2003, Bryce finished New York University Tisch School of the Arts. Later on, she continued to master her skills at the Stella Adler Conservatory and the Steppenwolf Theatre Company's School (Chicago). In 2000, the young actress started appearing in Broadway shows.

The artist’s first roles were episodic; she appeared in several movies of her father. The woman was uncredited, but it was her chance to gain some acting experience.

In 2004, Howard played a schoolgirl who fell in love with her teacher in Alan Brown’s Grey's Anatomy. By that moment, she had turned 23, yet she looked like a high-school student.

One day, the director M. Night Shyamalan noticed the actress on Broadway and invited her to his next movie The Village. Bryce got the role of Ivy, a blind and courageous woman, without auditions. Adrien Brody, Joaquin Phoenix, Sigourney Weaver, and William Hurt became her stage partners. The artist won MTV Movie Awards - Best Breakthrough Female for this role.

2006 brought another collaboration of Shyamalan and Howard: Bryce appeared in the movie Lady in the Water. However, critics gave the project a cold shower; it was even nominated for Golden Raspberry.

The same year brought the movie As You Like It based on Shakespeare’s play. Bryce gained the role of Rosalind and was nominated for Golden Globe.

In 2007, Bryce joined the cast of Spider-Man 3. She personified Gwen Stacy, Peter Parker’s new girlfriend, and had her hair dyed blonde.

2010 was marked with the new movie of The Twilight Saga. Bryce received the role of Victoria, the vampire on the “dark side”. In previous movies, Rachelle Lefevre played his character. The unsophisticated audience did not even notice the cast switch, and those who did were pleasantly surprised: red-haired Bryce looked perfect in this image.

In 2011, Howard played Hilly Holbrook in the movie The Help based on Kathryn Stockett novel under the same title. Her character was a villain: a spoiled and bitchy social activist. The movie was welcomed by critics and ordinary people; it was nominated for many prestigious prizes including The Academy Award, Golden Globe, BAFTA, and Screen Actors Guild.

The movie 50/50 brought another antiheroic character, Rachael, the girlfriend of the main character (Joseph Gordon-Levitt). Although it was a secondary role, the audience remembered the infantile and selfish beauty who could not realize how nasty she treated her close person.

Jurassic World opened a new epoch in the actress’s career. She played the main character, Claire Dearing, who worked as an operations manager in a dinosaur theme park. Together with Chris Pratt’s character, the woman has to save the world from the monsters. By the way, the story is set 22 years later after the events of the 1993 Jurassic Park.

In 2016, the family adventure movie Pete’s Dragon came out. The actress played Grace Meacham, a park ranger, who encounters a boy while patrolling the territory. The child tells her that he has lived in the forest for six years, and a dragon Elliot takes care of him. The woman decides to solve the puzzle of young Pete and reveal the truth about his family and the mysterious dragon that has fueled many rumors.

Fans were surprised to see their favorite in the series Black Mirror. This project contains several non-related storylines about the nearest future and the possible impact of modern technologies. The actress was also splendid in the crime drama Gold where she played the wife of the risk-taker (Matthew McConaughey).

Wherever Bryce Dallas Howard appears, she does not limit herself with the same images. She lives the lives of her characters, and her acting looks natural and appealing.

In 2001, Bryce started dating the beginning actor Seth Gabel who played in The Da Vinci Code and the series Salem and Fringe. In 2006, the couple married.

In February 2007, their first child, Theodore Norman Howard-Gabel, was born. Later, the actress said at The Talk that she had severe postpartum depression for 18 months. In 2012, the daughter Beatrice Jean Howard-Gabel was born.

The actress is an active Instagram user: she regularly posts photos from movie sets and family pictures.

In summer 2017, it was announced the artist planned to create a full-length movie based on Matthew Quick’s book Sorta Like A Rock Star. Bryce has also directed several projects: short movies and music videos.

By now, the movie has no distributor, and its cast or the date of the premiere are unknown. However, there is no reason to worry. Ron Howard also began his career as an actor and showed his directing talent only in 1977.

Bryce Dallas Howard is not going to quit acting. In 2018, she appeared in the next movie about dinosaurs, Jurassic World: Fallen Kingdom. 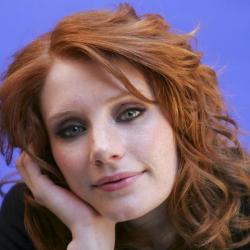