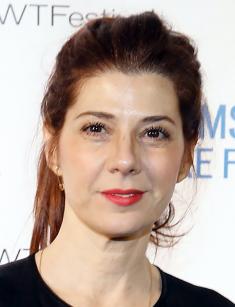 This Hollywood actress is considered to be the embodiment of femininity. She is mostly known for her roles in the movies The Wrestler, My Cousin Vinny, and What Women Want. Marisa Tomei is the owner of Oscar as well as other awards. The actress rarely gets lead roles, but even the episodes with her participation become mini-masterpieces of cinema.

A Hollywood star was born in Brooklyn, a densely populated area of New York, in the family of an English teacher and a lawyer. Marisa and her parents have Italian roots. Tomei's grandparents were immigrants from Tuscany and Sicily. Three years after the birth of the daughter, Adelaide and Gary Tomei had a son Adam, who also chose the path of acting.

The love of acting Marisa Tomei got from her parents, passionate theatergoers. They took the baby to Broadway shows. Soon, the girl was well versed in plays, acting and even found an idol. It was Barbara Stanwyck, a star of Broadway musicals. Marisa Tomei made her first steps in an acting career in early youth, which made her parents happy. The only thing the daughter was blamed for was her Brooklyn accent. But she could not get rid of the accent completely. In the comedy My Cousin Vinny, Marisa had a pronounced Brooklyn dialect.

Every summer the parents took their daughter away from the bustling metropolis to the province to her grandparents, whose youth passed through all the canons of hippie culture. In the area, Marisa Tomei developed acting skill by gathering like-minded young people and arranging performances and musicals in the self-made theater, which was located in a barn. The children improvised, made political and socially critical sketches.

In 1982, Marisa Tomei became a student at Boston University but attended it for only a year. She was invited to play a role in an American soap opera called As The World Turns. Tomei quit the university and appeared in the series which aired on CBS on weekdays from 1983 to 1985. Marisa starred in two seasons and realized that she needed no other profession but acting.

She started getting roles in full-length movies in the mid-1980s. The viewers saw Marisa Tomei in the film The Flamingo Kid. And three years later she appeared in the sitcom A Different World, where she played Maggie Lauten. Fame came to the actress in the early 1990s. 26-year-old Tomei was invited to star in the crime comedy called Oscar.

A remake by John Landis of the eponymous French comedy with Louis de Funès was a success. The lead role went to Sylvester Stallone. Marisa Tomei was incredibly lucky to appear on the screen with brilliant Sly and Hollywood stars Kirk Douglas, Ornella Muti, and Linda Gray.

The thriller Zandalee, starring Nicolas Cage, was released in the same year. Marisa Tomei got an episodic role. The actress gained popularity in 1992. The beauty from Brooklyn starred in the crime comedy by Jonathan Lynn called My Cousin Vinny, where Marisa Tomei played the role of Joe Pesci's girlfriend. The role brought Tomei a nomination for the most desirable film award - Oscar - as the Best Supporting Actress.

In the same year, fans of the rising movie star saw her in the biopic Chaplin which was based on the biography of the great actor. The role of Charlie Chaplin went to Robert Downey Jr., and his mother was played by Geraldine Chaplin who is actually Charlie's daughter. Marisa Tomei played Mabel Normand, a screenwriter, and director who was active at the same times as Chaplin. Tomei played her first major role in the melodrama Untamed Heart. The film was nominated for two MTV Movie Awards, one of which was awarded to Marisa Tomei and Christian Slater for the best kiss.

The next four projects were no success and did not bring generous box office fees to the creators. The actress managed to come back on the crest of success only in 1996 playing the role of a single mother in the melodrama Unhook the Stars. The work was noted with the nomination by Screen Actors Guild. The high acting skill of the actress film critics noted after the release of the projects Welcome to Sarajevo and Slums of Beverly Hills.

In 2000, Marisa Tomei appeared in the comedy What Women Want with Mel Gibson in the lead role. The actress got nominated for Oscar for the secondary role. A year later, the crime drama In The Bedroom brought Tomei the second nomination for the main Hollywood film award, but the statuette went to the actress Jennifer Connelly.

Marisa Tomei worked both in movies and Broadway musicals. Directors offer the star roles of heroines with unsettled personal life. Viewers saw Tomei in melodramas Crazy, Stupid, Love, Just a Kiss, and the series Rescue Me.

In 2007, 42-year-old Tomei played a provocative role in the drama Before the Devil Knows You're Dead by the famous director Sidney Lumet, where she appeared in nude scenes with Ethan Hawke and Philip Seymour Hoffman. The fans saw naked Marisa Tomei in the drama The Wrestler. She played a middle-aged stripper who stands topless in front of the character of Mickey Rourke. The role brought Marisa three nominations for the highest film awards: Oscar, Golden Globe Award and BAFTA.

Among the Tomei's works for the last six years, we can note the role in the fourth film by George Clooney called The Ides of March. Ryan Gosling played the protagonist, and Marisa portrayed Ida Horowicz, a reporter for the New York Times who blackmailed Gosling's character. The film won a Golden Lion at the 68th Venice International Film Festival and was nominated for main film awards.

In 2016, Marisa Tomei played a secondary role in the superhero action movie Captain America: Civil War, which grossed $1 billion in the world box office and took the 14th place on the box office in the list of 2016.

Marisa Tomei does not give comments and does not reveal any details of her personal life. One of the hottest Hollywood beauties has had a lot of affairs. There are some rumors about the romantic relationship of Marisa Tomei and Robert Downey Jr., with whom she starred in Only You and Chaplin. Daniel Ashbrook and Christian Slater are included in the list of star's boyfriends. Christian and Melisa started dating while working on the set of the melodrama Untamed Heart.

A year after the breakup with Slater, Marisa Tomei appeared in public with Lenny Kravitz. And from 2006 to 2008 she was dating film director Nicholas Carpenter. A young actor Logan Marshall-Green replaced Carpenter. The couple had been together for four years - until 2012, but their relationship did not end with marriage.

Marisa Tomei is not married, has no children. She looks younger than her age and enjoys the status of "Hollywood bride." The star enjoys belly dancing and loves spending time outdoors. The actress is open to everything except for the details of her personal life. She gives lectures on the elimination of violence against women. The actress starred in the documentary The People Speak with Morgan Freeman, Sean Penn, and Matt Damon. The actress also has an account on Instagram where she has 168 thousand followers. Marisa Tomei’s net worth is as much as $43 million.

In 2017, the star appeared in a fantastic action movie Spider-Man: Homecoming portraying Aunt May who takes care of her nephew, Peter Parker. Tom Holland played the role of Peter Parker.

In 2018, the movie Behold My Heart premiered with Marisa Tomei in the lead role.

Marisa Tomei has an estimated net worth of $43 million.