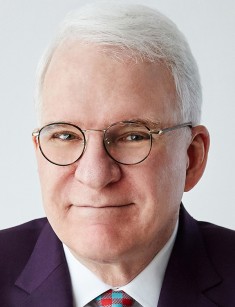 Steve Martin in 2017Steve Martin is a famous American stand-up comedian, actor, producer, musician, writer, and director. Almost every movie lover knows him because he played in such exciting and famous films as Father of the Bride, Mixed Nuts, Sgt. Bilko, Cheaper by the Dozen, The Pink Panther, etc.

Stephen Glenn (Steve) Martin (the actor’s full name) was born on August 14, 1945, in the provincial town of Waco in the south of the USA (Texas), but he spent his childhood in Southern California. The future actor grew up in a poor religious family, and his parents were Baptists. So, Mr. Glenn Vernon Martin and Mrs. Mary Lee held worship services every Sunday and participated in meetings where they prayed and discussed the Bible.

Steve's father was also a creative person. For example, during the Second World War in the United Kingdom, he played together with Raymond Massey in the production of Our Town. However, his further acting career was not successful. The actor recalled that his father was stern, unemotional, extraordinarily proud and critical of his son. Although he presented gifts, the relationship between Glen and Steve did not work out. As a teenager, the future actor disliked his father.

Since the Martin family did not live in luxury, young Steve had to earn money on his own. The young man worked at Disneyland, where he was a tennis ball boy, and also amused passers-by with tricks and playing the banjo, a stringed instrument. Besides, he worked as a loader and a postman. Before the start of the school day, the future actor delivered morning papers.

After graduation from school, Steve entered the California State University with a major in philosophy. Perhaps in the future, Martin would have recited Descartes’ works, or he would have told the students about the general principles of John Locke's worldview, but it did not happen much to avid moviegoers' delight. Philosophy classes did not inspire Martin.

Stephen thought about the future acting career by chance. The idea that he would become a successful comedian struck Martin out of the blue. Therefore, the young man began to show artistic talent, performing as a stand-up comedian in front of the audience in clubs and pubs. By the way, one more famous American actor, Michael Keaton, began his acting career in similar ways. Later, Martin admitted that he drew inspiration from the works of other comedians: Charlie Chaplin, Jack Benny, Steve Allen, etc.

In the 1960s, the actor was carried away with cinematography. He wrote scripts, various dialogues and comedy sketches. Of course, the gifted man was noticed by TV producers who offered Stephen the position of a screenwriter in the variety show The Sonny and Cher Comedy Hour. The future actor made significant progress, and he won the prestigious American Grammy Award for two albums (A Wild and Crazy Guy and Let's Get Small).

Steve Martin made his movie debut in the short film The Absent-Minded Waiter (1977), where the actor made viewers shudder with laughter. The plot of this independent film tells about a waiter who in the blink of an eye ruined the evening in an expensive restaurant. The inattentive young man wearing a bow tie managed not only to mix up orders but almost cause a quarrel between visitors destroying the place. Later, the actor played bit parts in the films Sgt. Pepper's Lonely Hearts Club Band (1978) and The Muppet Movie (1979).

In Carl Reiner’s movie The Jerk (1979), the comedian got the first leading role. The plot of this ironic and slightly absurd film centers on Navin Johnson, who finds out that he is a foster child. Therefore, the protagonist decides to leave his black parents and begin to live on his own. Thus, a kind, but stupid village boy came to the metropolis, and, as known, the life in the big city is in full swing.

Surprisingly, in 1981 Steve Martin played a non-comic role. He appeared in Herbert Ross’s musical drama Pennies from Heaven. But some movie fans did not see the reason for the director to offer one of the funniest men in America such a profound character. However, the actor surprised the viewers and brilliantly coped with his task, portraying dark-haired serious Arthur Parker, who wants to obtain money of his girlfriend’s father by a trick.

"I filmed without backups, so I just moved my legs and behaved like a fool, which I've been doing all my life," Martin said about the role in Pennies from Heaven.

A year later, Steve Martin participated in the crime comedy Dead Men Don't Wear Plaid. The black-and-white film tells about a private detective, Rigby Reardon, who plunges into adventure, investigating the intricate murder case. This film can be considered a pure parody of the film noir of the 1940s and 1950s. The actors and filmmakers managed to get rid of the atmosphere of pessimism and cynicism and add humor, self-irony, and sarcasm to the black and white thriller.

In 1983, the actor worked with director Carl Reiner again. This time, viewers saw the comedy film The Man with Two Brains. Steve Martin portrayed a mad scientist and brilliant surgeon - Professor Michael Hfuhruhurr, who came up with a new method of "cranial screw-top" brain surgery. However, meeting with a femme fatale, Dolores (Kathleen Turner), changes his life upside down.

In 1984, the comedian starred in the film The Lonely Guy by Arthur Hiller. Although this film is a comedy, the story begins with a personal tragedy because the protagonist, Larry, finds his beloved Danielle in bed with a lover. Steve Martin managed to get into a role and show the desperation of a betrayed man brilliantly.

In 1986, the stand-up comedian was lucky to take part in the bloodcurdling absurd comedy Little Shop of Horrors, a remake of the same movie of 1960, where Jack Nicholson played. The story of this insane full of black humor film cannot be called simple, because viewers had to watch the sinister flower eating human flesh.

Steve Martin has a lot of prominent roles because his filmography includes more than 50 projects, where the actor mainly played the title characters. But it is impossible not to say about the crime franchise The Pink Panther (2006) because the actor portrayed the chief inspector of the French police, Jacques Clouseau.

It's no wonder that director Shawn Levy offered this role to Martin because Jacques is an entirely incompetent and scatterbrain detective, who is used to getting into amusing situations. However, according to rumors, Kevin Spacey, Mike Myers and Chris Tucker could have equally played the title character. Kevin Kline, Jean Reno, Emily Mortimer, Jason Statham, Beyonce Knowles and others also played in The Pink Panther, a reboot of the franchise.

It is interesting that in America Martin is known as a serious-minded man. Some of his colleagues have repeatedly said that the actor is a reserved person who does not like to communicate with people. But some journalists have dispelled this stereotype because at least at press conferences Stephen is easygoing and delights the media representatives with sparkling jokes and playing the banjo (Steve even has his country band Steve Martin and the Steep Canyon Rangers).

As for Martin’s personal life, it is known that he loves to collect the pictures of famous artists. In his gallery, there are works by Picasso, Maxfield Parrish, Lucien Freud, etc. Although the actor is well versed in the paintings and a curator of the exhibitions, he has fallen a victim of the fraud of the century. In the summer of 2004, the comedian purchased Heinrich Campendonk’s painting Landschaft mit Pferden (Landscape With Horses) for $ 850,000. However, trying to sell this painting at an auction, Martin discovered that this Campendonk’s work was a forgery.

As for the actor's love affairs, they are not a secret for anyone. Stephen’s first muse was the American actress, Bernadette Peters. The relationship lasted until the early 1980s. Then he had a love affair with Victoria Tennant. In the autumn of 1986, they married, but the couple divorced eight years later.

In the summer of 2007, Martin made a marriage proposal to the journalist (the former staffer for The New Yorker magazine), Anne Stringfield. The lovers married in Steve's mansion in Los Angeles, and the comedian’s best man was television producer Lorne Michaels.

It is noteworthy that the guests (among them were Tom Hanks and Diane Keaton) thought that they were going to a home party until the last moment. In the winter of 2012, Anne gave birth to her husband’s daughter. Thus, the 67-year-old comedian became a father.

Unfortunately, the famous actor does not have an Instagram account, but Steve Martin actively shares the news with fans on Twitter. As of 2017, the comedian has almost 9 million subscribers.

It is noteworthy that this is the second film in Martin's career, whose plot is connected with Thanksgiving Day (in 1987 he played in the film Planes, Trains, and Automobiles). 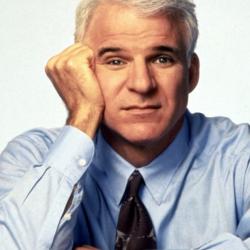