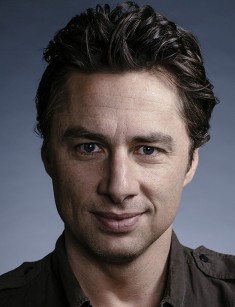 The name of the charismatic actor Zach Braff is closely connected with the famous series Scrubs. Having performed the role the eccentric Dr. John Michael Dorian, the talented and skilled American actor has become a star of cinematography overseas, and he has collected the numerous army of the admirers.

Zach Braff was born on the 6th of April, 1975 in the city of South Orange (US) situated in the State of New Jersey. The actor has two brothers - Joshua and Adam Jay - scriptwriters who are working on the television, and the actor's sister has dedicated his life to the designer's profession. It's known that the actor’s parents divorced when Zach was a small child. His father Hal Braff worked as a lawyer, and his mother Anne Brodzinsky was a clinical psychologist.

Although at the age of ten the future Hollywood star was diagnosed with "obsessive-compulsive disorder" since the young years Zach has been dreaming about the acting career. In his teenage years, Braff took part in all school performances and plays.

Although the young man received the school-leaving certificate in 1993 after the successful completion of the entrance examination, he became the student of Illinois Northwestern University. Having received the Bachelor's degree in Arts, the actor set off to New York where he joined the local Community Theater. At the stage of this theater, the future actor of the series Scrubs was performing in Shakespeare's performances Macbeth and Twelfth Night during a couple of months.

As well as some well-known actors, Zach started to conquer Hollywood with episodic roles. At the beginning of his career, Braff took part in the pictures Manhattan Murder Mystery, Blue Moon, Getting to Know You, The Broken Hearts Club: A Romantic Comedy and Endsville.

In 2001 the beginning actor got the leading role in the comedy TV series under the title Scrubs. Except for Zach, in this cult movie there took part Sarah Chalke, Donald Faison, Judy Reyes, John C. McGinley, and Neil Flynn. The American comedy and drama TV movie which tells about the life of the young interns was broadcast since the October of 2001 till the March of 2010. Due to the role of Dr. John Michael Dorian, Braff became the three-time winner of the Golden Globe Awards once received Emmy Award.

In 2003 Zach wrote the script, directed the movie and took part in the leading role in the drama Garden State. The plot of the picture is focused on the love story of the guy who is taking the antidepressants, and the girl who has epilepsy. Braff appeared in this movie together with Natalie Portman, Peter Sarsgaard, and Ian Holm.

In 2004 Braff became the central personage of the episode of the series Arrested Development and voiced-over the personage of the animated series Chicken Little and the video game Kingdom Hearts II. The year 2006 was marked by the release of the movies The Last Kiss and The Ex. The plot of the first movie is centered on the life story of the man whose happy life has come to an end after the news that his beloved woman is expecting a baby.

The second picture present to the audience the character of Reilly – the guy who has never been concerned about the career and has been living at the expense of his beloved wife, Sofie. When his beloved woman starts her maternity leave, the chronic idler gets a job on the coattails of his father-in-law. In this company also works the ex-lover of his spouse. In 2011 Zach performed the episodic role in the comedy series The Exes and later returned to big cinematography.

In 2012 he received one of the significant roles in the dramatic movie The Color of Time. The shootings in this movie proved to the cinematic community that Braff can be successful both in the comedy and drama genre. The same year the actor took part in the movie The Color of Time together with James Franco, Mila Kunis, and Jessica Chastain. The film is focused on the life story of Pulitzer Prize winner - C.K. Williams.

In 2013 the actor enriched his filmography with the strange role of the monkey Finley in the fantasy Hollywood blockbuster directed by Sam Raimi. In January of 2014, there was released the movie Wish I Was Here. In this comedy, Braff has transformed into the role of the loser who hasn’t managed to find himself by the age of thirty-five.

The part of funds for the shootings of the movie was collected using the donations. A month later people all over the world invested $3.1 million in this project. In September of 2016, there was held the world premiere of the drama In Dubious Battle. Sam Shepard, Robert Duvall, Ahna O'Reilly, and Ed Harris also took part in the movie based on the same-name novel by John Steinbeck.

Zach has always preferred to keep his relations with women in secret. Despite the efforts of the actor he hasn't managed to conceal his private life, crafty journalists have always managed to find out who the actor's girlfriends are. From year to year in the press, there appeared the messages about a couple of filings of the famous comedy actor.

It's known for a fact that during the shootings of the picture Garden State, the actor had relations with the singer Bonnie Sommerville who performed one of the header songs to this movie. However, this couple broke up right after the picture was released.

In 2004 the actor began to have a love affair with the owner of Young Hollywood Award - Mandy Moore. Two years later Braff began to have relations with the actress Shiri Appleby, though this relationship hasn’t lasted for long.

In 2009 the model Taylor Begley became Zach's girlfriend. They broke up in 2014 after five years of the relations. They parted because the star of the Scrubs didn't want to get married to the actor. In the interviews, the actor repeatedly told that he still was young and had an opportunity to realize himself in the creative career and he would prefer this to the family life.

It's known that the couple began to have problems when the actor started to work in the theatrical adaptations of the same-name movie of Woody Allen – the musical under the title Bullets Over Broadway. While the actor spent all his spare time on the rehearsals of the play, Taylor took part in the shootings and appeared at the fashion displays. Because their working schedules didn't coincide the lovers couldn't see each other. That's why they decided to part without quarrels and scandals.

In the interviews with the mass media, the actor told more than once that he would decide to get married and his wife would have to love children, to cook well and to have a great sense of humor. In the director's opinion, happy family life isn't positive without a good sense of humor. The best friend of Zach, the actor Donald Faison has a similar opinion, and in 2005 he publicly made fun of something. That year Ashton Kutcher's program Punk’d was very popular.

Braff has become the character of the show. According to the script, while Donald was distracting Zach's attention, the 12-year old boy painted the actor's expensive car with the spray paint. The producer didn't know that it was a trick and sincerely thought that his car was spoiled. When the actor was already on the verge, the film crew of the program appeared around the corner and told Braff that it was a joke. Later the actor confessed that he had thoughts to punish the hooligan before the arrival of the police to beat the child.

In 2013 at South by Southwest film festival, there was premiered the movie The Disaster Artist directed by James Franco. Braff performed the leading role in this picture. The world premiere of the movie which plot is focused on the memoirs of Greg Sestero who played the main character in the cult movie of the leading man in the cult picture The Room directed by Tommie Wiseau was held in September of 2017.

The same year Zach directed and appeared in the comedy Going in Style. This movie tells about two best friends who have retired – Willie (Morgan Freeman), Joe (Michael Caine) and Albert (Alan Arkin). Despite their solid age they decide to stray from the path of righteousness to return their savings. Oppressed by the payment of the accounts and the prospect to find themselves at the end of the world without a penny, three elderly friends decide to risk everything and to rob the bank which has kept their money.

In autumn of 2017 the series Alex, Inc. will be released on the television. In plot is centered on the story of the radio host Alex Schuman (Zach Braff) who, having obligations to his wife and children, leaves his well-paid work and makes up his mind to open his own company. The man encouraged with his dreams of greater life didn't have an idea what difficulties he would pass and that he would have to start his business from scratch.

Despite the busy working schedule, the actor who is 183 cm tall and weighs 76 kilos doesn't forget about his fans. The star of the series Scrubs regularly publish video cuts from his vacations and pictures from the shootings on Twitter, Instagram, and Facebook. It's worth noting that social networks are not the only source which can tell the fans about the latest news from the actor’s life. There are often published the materials connected with the actor’s creative biography on the internet portals and printed editions. 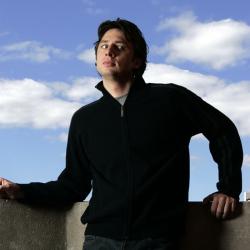