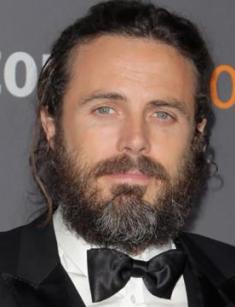 Casey Affleck is a famous actor, producer, and director who rose to prominence thanks to his roles in the comedy trilogy Ocean's Eleven, Ocean's Twelve, Ocean's Thirteen, and the movies Manchester by the Sea, Ain't Them Bodies Saints, and others. The actor who is 5.74 ft. (175 cm) tall is fluent in Spanish.

Casey Affleck was born in August 1975 in the town of Falmouth, Massachusetts. He has Scottish, English, and Swiss ancestry. Casey is the youngest child in the family, and he has a famous brother, Ben Affleck.

Casey and Ben’s childhood was not cloudless; their father changed one low-paying job for another, and his alcohol addiction caused problems in the family. The mother was a primary school teacher who graduated from Harvard University. She could not endure the husband’s alcohol abuse for a long time and filed for divorce.

After the divorce, nine-year-old Casey and his older brother Ben were raised by their mother in Cambridge. Subsequently, Casey’s father quit drinking and began to work as an addiction counselor, helping other people to overcome their addiction. Casey was so struck by this transformation that in his teens, he restored the relations with his father and since then has kept terms with the man for many years.

Their mother played the leading role in the upbringing of the brothers; she instilled in them a passion for acting and different types of creativity. She took them to theaters, inspired them to create home videos, and talented people regularly gathered in their house in Cambridge. The mother’s friendship with the local casting director helped the children to get their first offers, be it shooting in commercials, a bit apart in the series, or a job as a movie extra.

Studying at a high school, Casey attended courses at the acting school and participated in numerous school theater productions. The man admits that at that time, he understood that an acting career was exciting and stimulating work; he liked it and was ready to devote his life to the film industry.

At the age of 18, Casey moved to Los Angeles to pursue an acting career and rented an apartment with his brother Ben and their mutual friend Matt Damon. So, he began to conquer Hollywood.

Casey Affleck started the thorny path to success, working as a film extra and playing bit parts. At the age of 20, Casey was offered to play the supporting role in the movie To Die For by director Gus Van Sant. It was an important role for young Casey, but it did not help him to make a breakthrough in his career. He even abandoned the idea of appearing in a full-length movie and went to study at the university. At first, the man moved to Washington, D.C., and then to New York City. However, he did not graduate from the university because Casey soon got tempting job offers, which he could not refuse.

One of these proposals was a minor role in the film Good Will Hunting, which script was written by his brother and their friend Matt Damon. The movie became a landmark for their generation and was included in the "100 Favorite Films" list. However, later, the Affleck brothers chose different career paths. While Ben became a star and starred mainly in blockbusters, Casey chose the independent cinema and arthouse.

During this period, his credentials added both movie flops and projects that brought the actor income and popularity. For example, he managed to join the cast of Steven Soderbergh’s film series about Ocean’s adventurous friends, starring Brad Pitt, Julia Roberts, and George Clooney. His roles were not the leading ones, but even bit parts stood the actor in good stead.

The next turning point in his career was a breakthrough for Casey. First, his older brother decided to try his hand at directing and offered Casey the leading role in his movie Gone Baby Gone (2007), in which younger Affleck appeared as a private investigator. Michelle Monaghan, Ed Harris, and Morgan Freeman also played in the movie. The crime drama was warmly received by film critics and repeatedly nominated for the Golden Globe Awards, Academy Awards, Saturn Awards, and others.

Then, the same year, the second movie with Casey was released. It was based on the novel "The Assassination of Jesse James" by the Coward Robert Ford, in which Brad Pitt also played. The film received numerous positive reviews, and the image of a young coward rebel who paced like a caged animal impressed both viewers and film critics. Casey received his first Oscar and Golden Globe nominations for portraying Robert Ford.

After such a successful performance, Casey tried to work as a director-cameraman. He put his back into the film I'm Still Here (2010), starring his friend and relative on his wife’s side, Joaquin Phoenix. Despite his efforts, the movie received negative reviews from viewers and film critics. This year, the controversial movie The Killer Inside Me was also released, telling about the serial killer. In the project, Casey played the main villain, and Jessica Alba portrayed no less important female character.

In 2011, the actor landed a part in the detective comedy Tower Heist, in which such Hollywood stars as Ben Stiller and Eddie Murphy also starred.

In 2013 Casey began shooting in Hollywood projects. In 2013, two movies with his participation were released; these were the thriller Out of the Furnace and the melodrama Ain't Them Bodies Saints. In 2014, the fantasy film Interstellar directed by Christopher Nolan premiered, in which Casey Affleck also had an exciting role.

In 2016, the actor’s filmography included three movies of different genres. Moreover, Casey played a significant role in each of them and showed his incredible talent. One of these projects is the touching drama Manchester by the Sea, which was listed as the top film of 2016.

At the end of the year, Casey became a kind of Hollywood hero for acting in the movie Manchester by the Sea and for the total number of various projects. Therefore, his appearance on the cover of the special issue of W Magazine as the best actor was not surprising. By the way, the cover also featured actress Emma Stone, whose popularity increased in the City of Angels in 2016.

In 2006, Casey Affleck married his long-time girlfriend, actress and model Summer Phoenix, who is the sister of Joaquin Phoenix and River Phoenix. The wife gave birth to two sons, Indiana (born in 2004) and Atticus (born in 2008). In March 2016, it was announced that the couple filed for divorce, citing "irreconcilable differences." The divorce process lasted a year, but even the family psychologist did not help them to prevent the separation.

The reason for the breakup might well be the scandal that involved Casey. The actor was accused of sexual harassment by two women: the cinematographer and the producer of the documentary I'm Still Here, which Casey directed. The lawsuits were settled out of court. After receiving these allegations, they held closed-door negotiations, and the parties came to an agreement. As a result, all charges were dropped, and they paid some money to the women.

The legal case has long been dropped, but the press is still regularly discussing this topic because a case that has not been brought before the court has left the question open. It is still not clear whether the actor is guilty or the harassment is just evidence-free accusations. The press began to recall the scandal that occurred six years ago due to the success of Casey Affleck's new movies.

However, the actor continues to live up to the hilt. In the autumn of 2016, Casey began to appear in public together with a new girlfriend. Popular newspapers and magazines often publish photos of Affleck with the new darling, 33-year-old actress Floriana Lima.

From childhood, Casey has loved and taken care of animals. Therefore, it came as no surprise to anyone that when Casey grew up, he became an ardent animal rights activist. He collaborates with international animal welfare organizations. Casey Affleck became a vegan in 1995. The meat-free diet helps the actor to keep fit. He is 5.74 ft. (175 cm) tall, weighing 152.11 lbs. (69 kg).

When Brie Larson presented the actor with his Oscar for Best Actor, the woman did not look happy about it. In many ways, his clouded reputation influenced the attitude of the actress towards Casey Affleck. Larson is very concerned about the problem of sexual harassment. Previously, the girl had played a leading role in the movie Room, which addressed this issue. For her work, Bree Larson also won an Academy Award.

In 2018, following the tradition, Casey Affleck was invited to the Oscars as a celebrity who presented the Best Actress award. But Casey Affleck refused to participate in the celebration when the petition was launched on the Internet, demanding not to allow him to attend the ceremony.

Nowadays, the actor plays in one or two movies per year. In 2017, Casey delighted fans with his leading role in the sci-fi movie A Ghost Story. Young star Rooney Mara portrayed his wife. At the end of September 2018, the new project The Old Man & the Gun is scheduled to premiere, in which Casey will appear as detective John Hunt.