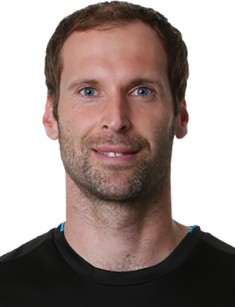 Petr Čech is known not only as one of the most expensive goalkeepers of our time, but also the best goalkeeper. The football player has kept goals for the club or the Czech Republic national football team many times. When the tall, well-built Czech plays goal, the opponent must work hard to score at least one goal.

Petr Čech was born in the small Czech town of Plzeň on May 20, 1982. While keeping goal, the man can show excellent skills thanks to his impressive bodily constitution and height. The Peter’s height is 196 cm with a weight of 90 kg. It's hard to believe that at birth he weighed less than two kilograms.

His mother was pregnant with triplets. Unfortunately, Peter’s brother died of an infectious disease when he was two years old. The parents brought up Peter and daughter Šárka. Besides, the oldest daughter, Markéta, grew up in the family.

It is surprising that the boy was not fond of football in his childhood. The passion of the future goalkeeper was ice hockey, and his idol was Dominik Hašek. To the delight of fans, the parents of the young sportsman could not afford the purchase of the form and other ice hockey equipment.

Therefore, the boy had to change priorities and enroll in a football sports section. But he did not become goalkeeper at once. Initially, Petr played as a left winger. However, at the age of 10, he broke his leg.

After the injury, he decided that the position of the goalkeeper is less dangerous. The boy first kept the goal. As it turned out, Čech caught a ball best of all.

The legendary goalkeeper began his career in FC Viktoria Plzeň, which Čech joined being a boy. The young man played for the club until 16 years. When he distinguished himself at the youth tournament in Amsterdam, in 1999 FK Chmel Blšany invited the athlete at the age of 17.

Soon the managers of Sparta Prague, the successful Czech team of that time, noticed the talented goalkeeper. In 2001, Čech signed a contract with the club. However, he played one season there. During this season, Čech managed to set the national record for the longest time elapsed without conceding a goal, stretching his run to 855 minutes.

In 2002, French Rennes paid the player’s transfer fee of € 5 million. The season was successful for Rennes. Thanks to the confident play of the goalkeeper, the club reached the semi-finals of the Coupe de France.

In 2002 Peter also started his international career. Čech played as the goalkeeper for the national team of the country in the friendly match against Hungary. The game ended with the victory of the Czech Republic, as well as the next six games with the famous goalkeeper.

In 2004, English Chelsea paid € 10.3 million for Petr Čech. By the way, joining the club, Čech did not immediately take the position of the first choice goalkeeper. Carlo Cudicini, the best goalkeeper of the Premier League, already kept a goal in Chelsea at that time. After a string of irrevocable mistake during the pre-season training, Cudicini soon lost ground, and Čech became the first choice goalkeeper of the club.

During his career in Chelsea, Petr had nicknames "Mr. Zero" and "Tankman." The goalkeeper was nicknamed "Mr. Zero" for the brilliant record of clean sheets. Čech did not let a goal for 1025 minutes during 11 games and 35 minutes.

The second nickname is connected with less enjoyable events in the life of the goalkeeper. In 2006, the goalkeeper collided with Reading midfielder during a Premier League match. The result was a severe head injury, a depressed skull fracture.

The career of the athlete was in jeopardy. The doctors predicted a return to the field one year after the operation or even more, and early training could be fatal. However, the football player began light training a week after returning from the hospital. Less than a year after the operation, Čech already kept goal for the club in the match against Liverpool.

After sustaining the injury, the goalkeeper wears a special head guard, which protects the head from possible complications when he plays on the field. The head guard is made-to-order by the German Adidas.

By the way, it is not the last serious injury that ended with surgery. During the training in 2008, the goalkeeper got the severe cut of the lips and chin. Physicians put 50 stitches, and also made plastic surgery to restore the face line. After surgery, Petr wore a mask for rehabilitation until the FIFA Champions League.

In 2016, the goalkeeper decided to finish his international career.

The style of the goalkeeper’s play combines the excellent technique, as well as his natural abilities. Tall, dexterous and fast Čech manages to catch a ball from every corner. A well-developed technique, attention and instant reaction become an insurmountable obstacle for penalties.

The goalkeeper tries not to tell the details of his personal life. At the same time, Čech does not like secrets. The fact is that a football player, as well as his wife, does not give reasons for gossip and scandals, so the press has nothing to cover.

They are the same age and the. Happy Petr and Martina Čech got married in 2003. The young woman was engaged in sports gymnastics and achieved some individual awards. They are faithful spouses and excellent parents. The couple brings up two children, Adela and Damian.

Photos of the happy couple often appear on the Internet and in the media. Martina regularly visits her husband during the season. They attend social events together.

Besides his football career, Petr got a law degree. The goalkeeper speaks four foreign languages. He is fluent in English, German, French, and Spanish.

The athlete is keen on music. Čech perfectly plays the drum, has his YouTube channel. In 2012, the amateur drummer even performed at a concert in Wroclaw.

In 2018, the player continues to play for Arsenal. Together with his teammates, Čech won the FA Cup, which became the 13th for Arsenal and the fifth for the goalkeeper. Thanks to the trophy the team was named the best in the history of the tournament.

In the 2017-2018 season, he took the captain's armband for Arsenal. Nowadays he is one of the best goalkeepers. The goalkeeper has numerous awards and achievements. 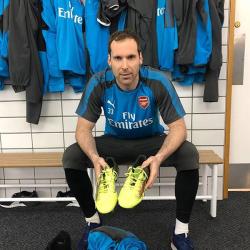