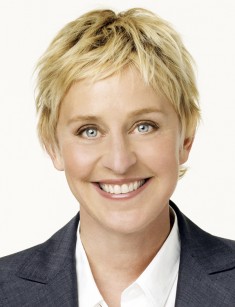 Ellen DeGeneres is the famous American TV presenter and comedian. She has been granted the honor of performing the Academy Awards ceremony twice. Ellen is considered to be the most genuine and open person of the American television.

The would-be actress was born on January 26, 1958, in Metairie, Louisiana. She has the elder brother Vance; he is a producer and musician.

The girl’s mother Betty was a speech therapist who worked with children and adults; the father Elliott Everett DeGeneres was an insurance agent. Ellen’s parents were Scientologists, so the girl was educated according to the Scientological church principles until 13.

When Ellen was 15, Betty and Elliott divorced. In the course of time, the mother married a traveling salesperson Roy Gruessendorf. Together with Ellen, the couple moved to Atlanta. Vance stayed with his father.

In 1976, the young woman graduated from middle school and studied at Grace King High School for a year. Later, she applied to the University of New Orleans, but quitted after a term and got hired in a law company. At the same time, she worked part-time as a waitress, bartender, salesperson, and even a house painter.

Ellen’s career began when she was young: in the late 1970s, she performed at clubs and coffee shops as a stand-up artist. In 1981, the young woman became the emcee at Clyde's Comedy Club. In the next year, the channel “Showtime” called Ellen the funniest person in the USA. At that time, DeGeneres started touring over the country.

In 1986, Johnny Carson invited the comedian to his show. Ellen DeGeneres became the first female comedian who appeared as the guest star in this program after stand-up performances. Besides, Ellen demonstrated her acting talent in the movie “Coneheads.” Later, she appeared in a series of movies “Ellen's Energy Adventure.”

Successful comedy performances built Ellen’s good reputation. In 1994-1998, the TV series “Ellen” was released. The sitcom reached the peak of its popularity when DeGeneres openly announced she was gay at “The Oprah Winfrey Show” in February 1997.

Later on, the moment of coming-out appeared in the series. “The Puppy Episode” increased the sitcom’s rating enormously. However, none of the next episodes could be compared with the confession episode, so the show creators closed it.

For the next three years, Ellen DeGeneres had no job; it was a difficult time for her. In 2011, the comedian was offered to hold the Emmy Awards Ceremony. The event was canceled twice because of the 11th September tragedy, yet it was finally held to distract people. Ellen was brilliant: she was making jokes and amused the audience. People listened to every word of hers and clapped their hands.

After the ceremony, Ellen appeared on the TV screen again with the sitcom “The Ellen Show” whose main character was a lesbian. However, the sitcom ratings were low, and the project was closed in a year.

In 2003, the cartoon “Finding Nemo” was released; the movie was loved by the audience, and the grossing was good. Ellen voiced the funny fish Dory who had a short memory. Thus, the actress became popular again.

In the same year, there was another significant event: the artist created the daytime talk show “Ellen DeGeneres Show.” It stood out among other TV shows: Ellen joked with the audience, sang with it, danced, and raffled tickets to different countries.

In 2007, the TV presenter was hospitalized, but it did not prevent her from broadcasting from the hospital ward. In the end, “The Ellen DeGeneres Show” was nominated for the Emmy Award 11 times; the first three seasons received 25 Emmy Awards. On May 1, 2009, Ellen DeGeneres celebrated the 1000th episode of her show; Justin Timberlake, Oprah Winfrey, and Paris Hilton were the guests.

In 2007, Ellen hosted the Academy Award Ceremony again. Thus, she became the first open LGBT person who organized this event. Critics positively reviewed Ellen’s manner to entertain the audience. For this ceremony, DeGeneres was nominated for the Emmy Award.

In 2014, Ellen was invited to host the Oscar Ceremony again. The selfie with Brad Pitt, Meryl Streep, Bradley Cooper, Angelina Jolie, Lupita Nyong'o, Jared Leto, Julia Roberts, Channing Tatum, Jennifer Lawrence, and Kevin Spacey was a remarkable event. The comedian posted this photo on her Twitter page; there were so many retweets that there were some glitches in the social network operation.

In 2009, Ellen was the spokesperson for the cosmetic line “Cover Girl.”

In 2010, DeGeneres was one of the judges in the musical contest “American Idol.”

From the moment Ellen DeGeneres came out, her personal life was frequently discussed by the media. Initially, Ellen’s mother was shocked by this news, but later, she became a passionate defender of her daughter.

In 1997, Ellen had a love affair with the actress Anne Heche; the relationship lasted until 2000. Later, the TV presenter met the photographer Alexandra Hedison, but the couple split up in 2004. The news about their breakup appeared on “The Advocate” cover.

In 2004, Ellen started dating the actress Portia de Rossi who was 15 years younger than her.

In 2008, as soon as same-sex marriages became legal, the couple married on August 16 in their house. 19 guests including the newlyweds’ mothers were present. Portia appeared in the traditional white dress; Ellen followed her style and wore a white suit. Two years later, Portia officially took her wife’s second name.

In 2016, rumors had it on the Internet that Portia and Ellen were going to divorce because of de Rossi’s love affair with her male colleague, but this information was not confirmed. On the contrary, the couple demonstrates their warm feelings to each other. In Portia’s Instagram, there are many photos of her beloved wife.

The family has no children, but they “bring up” three dogs and four cars. Both women are vegetarian.

Nowadays, Ellen is one of the most successful and popular TV presenters of America. The woman continues to be a brilliant TV personality, and her popularity is at its peak.

In 2017, Ellen and her wife sold their mansion in Santa Barbara and bought a smaller house. The new house is not far from the ocean, and Oprah Winfrey is the couple’s neighbor. 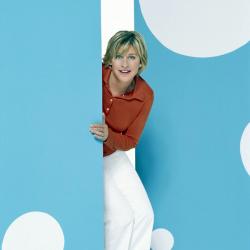