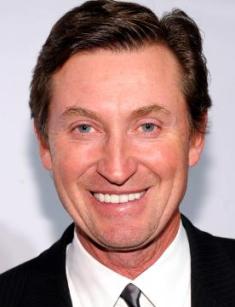 Ice hockey is a popular and favorite sport in Canada. The country became fascinated with this sport in the early 60s. It is the birthplace of Wayne Douglas Gretzky, the famous ice hockey player, the star of the twentieth century, the national idol, the legend of the Hockey League, a family man, the Great One (he got this nickname at the age of 19). He led his team to four Stanley Cup championships and holds 61 NHL records.

The professions of the parents of the talented hockey player had nothing to do with ice hockey, but the athletes’ incomes (up to $ 100,000 per season at that time) attracted the attention of families where boys were raised. It was prestigious to send children to sports clubs, so Wayne's father, Walter Gretzky, decided to take up the lead.

Gretzky, the Great One, was born on January 26, 1961, and grew up in Brantford, Canada. His father made a rink for his son in the back yard of the family home, where the kid first tried to skate. He was then two years old.

When the boy was five years old, he joined the city ice hockey team. At the age of 10, he became famous and popular. Newspapers wrote about the young talented player, promising him a stellar career and, as it turned out, they were not mistaken.

It is interesting that the hockey player’s grandparents originally hailed from the USSR, or rather, present-day Belarus. There, his grandfather was born in the territory of the Grodno Governorate (Russian Empire). The man was a farmer but in the early twentieth century immigrated to Canada with his Ukrainian wife, Anna.

Wayne had a close relationship with his grandparents; the grandfather supported the grandson's sports interest at the right time, and his grandmother was the first goalkeeper for the 2-year-old boy. Wayne is fluent in Belarusian and Ukrainian.

In addition to hockey, young Gretzky was fond of other sports: basketball, football, baseball, golf, and weightlifting. The father of the future star visited his son's two matches (football and hockey) every day.

At the age of 14, the young hockey player competed with 20-year-old opponents. The talented boy corresponded with their level of abilities. After signing a contract with the Greyhounds (Ontario), the 16-year-old young man began to build a professional career. During the season, Wayne scored 70 goals, which allowed him to participate in the World Junior Championships in Montreal.

In the Greyhounds club, Gretzky wanted to wear number 9 for his hockey hero Gordie Howe, but it was already worn. Then the young man chose number 19 and played several matches wearing it. The team manager advised Wayne to settled on 99. It was the athlete’s talisman during his professional career. The sweater with this number on the back is kept in the hockey glory museum as a sight of pride and respect for the talented celebrity.

In 1978, Wayne Douglas signed a contract with the hockey club of the World Hockey Association (WHA), (he was 17 years old). The athlete, like any Canadian boy, dreamt of the NHL career, but its members are adult players.

A year later, the young man's dream came true. In 1979, the athlete was traded to the Edmonton Oilers, which joined the NHL. Here the man worked for ten years. Later, Gretzky admitted that this club became his home. The hockey player led the team to 4 Stanley Cups Championships and other awards.

But in 1988, the leadership decided to transfer the athlete to the Los Angeles Kings. The reason was the money which was paid for the young player. The new team showed less significant results than Wayne’s former club, which upset the man.

In Los Angeles, Gretzky continued to break records. The hockey player was awarded the Hart Trophy in 1989, playing for the Kings. The same year, the young athlete had to compete with friends from Edmonton. Wayne Douglas scored goals, having 1,850 points, which broke Gordie Howe's career goal-scoring record. Moreover, everything happened within 4 minutes of the game.

Wayne's transfer to the Kings helped the club to reach a high level. In the 1990-1991 season, the team finished first in the Smythe Division. In 1994, Gretzky was named the leading scorer in the NHL history and awarded the Art Ross Trophy.

In 1996, the hockey player decided to change the club and asked to transfer him to another team. Gretzky continued his career, successfully playing for the St. Louis Blues, but conflicts with the new management forced the athlete to leave and sign a contract with the New York Rangers, where he finished his hockey career.

At the end of his career, the Great One continued to surprise his fans with new records and the best goals:

In 1999, Gretzky retired from the sport, having scored only nine goals in 70 games (the last, 1072nd, goal was scored on March 29). Wayne managed to break his idol Howe’s record, having scored one more goal than Howe. It set the new record in the history of ice hockey. A lot of documentary films about the famous hockey player were shot.

The lovers built their careers simultaneously. Janet began playing in films in 1973. The woman continues to develop her television career. Her main project is the film Police Academy 5: Assignment Miami Beach.

In 1988, the couple celebrated the wedding. The celebrities have five children who look like the famous hockey player. The last two kids were born after Gretzky’s retirement. The youngest child in the family is daughter Emma.

In 2015, The Great One became a grandfather.

Although Wayne Gretzky quitted the professional career almost ten years ago, he continues to follow hockey events, important games, speaks publicly about the results of the teams. In 2016, the champion became partner and vice-chairman of Oilers Entertainment Group, the owner of the NHL Edmonton Oilers club in Canada.

The legendary hockey player inspired the creators of the animated series. A new character, the talented Canadian player, has recently appeared in the cult project The Simpsons.

The famous person actively participates in different spheres of life, including politics (the Russian-Ukrainian conflict). Nowadays, the legendary athlete does not have ambitious goals, and he 2is engaged in various activities: the restaurant business, the launch of his own clothing line, shooting in advertisements. At the same time, Gretzky’s family serves as a model for many couples in Canada, the USA, and other countries of the world.