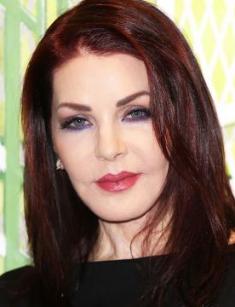 Priscilla Presley used to be the beloved one of the brightest rock’n’roll star Elvis Presley; she was also a mother-in-law of another music idol, Michael Jackson. Elvis described Priscilla as the woman he had been looking for his entire life. Although she has tried many occupations, the audience knows her as the musician’s wife in the first place.

Priscilla Ann Beaulieu was born in Brooklyn in May 1945. The girl’s father, James Wagner, served as a US Navy pilot and died when his daughter was three. The mother’s name was Anna Lillian Iversen; she married another military pilot, Paul Beaulieu, who gave Priscilla her middle name. The would-be celebrity learned that Paul was not her biological father when she was a teenager; it happened by accident when she found a childhood picture with her parents.

The family often moved because of the father’s duty. At 14, Priscilla lived in Wiesbaden, Germany, where Elvis served. The young people met at the local club. The future musician was ten years older than Priscilla, but none of them minded the age difference.

Priscilla entered the world of cinematography after she divorced her famous husband; his death was also a severe blow. Work was a coping strategy for the woman: it distracted her from depressing thoughts. Before that, Presley had tried to find herself in the fashion industry.

The beauty often appeared in TV shows, series, and movies about her ex-husband and had cameo roles. The part of Jenna Wade in the soap opera Dallas was pretty significant.

The story about problems and relationships in the oil tycoon’s family was awarded many prizes and nominations. Many American celebrities came from the project that broke records in the number of viewers and adaptations in other countries. Priscilla Presley personified the main character’s friend, whom he used to love as a school student. Besides, Priscilla got the lead parts in the series The Fall Guy and the adventure melodrama Love is Forever.

The series of comedies The Naked Gun was another significant event in the actress’s life. She played Jane Spencer, a drug lord’s girlfriend; the Hollywood comedian Leslie Nielsen got the main part. 1991 was marked with the sequel The Naked Gun 2 1⁄2: The Smell of Fear with John F. Kennedy Jr. and the football star Orenthal James Simpson. Three years later, Naked Gun 33 1⁄3: The Final Insult starring the sex symbol of the 1990s Anna Nicole Smith came out. Priscilla’s character became the protagonist’s wife in the third part.

In 1993, the artist joined the cast of the TV series based on the 1950s comics Tales from the Crypt. She had the chance to collaborate with many celebrities: Arnold Schwarzenegger, Martin Sheen, Tom Hanks, Iggy Pop, Timothy Dalton, and Demi Moore.

The actress’s comedian talent manifested itself in Renny Harlin’s action The Adventures of Ford Fairlane. Ironically, it was a story about a singer – the only difference was the music genre, heavy metal. Neither ordinary viewers no critics appreciated the project, and it received the Golden Raspberry Award for Worst Picture in 1990.

By the moment Elvis and Priscilla met, the man had a girlfriend and almost fiancée Anita Wood. However, she was not destined to be the musician’s wife: young Beaulieu conquered his heart immediately. As the singer remembered, Priscilla not only looked beautiful but also did not try to earn his attention at any cost.

It was pretty challenging to convince the young woman’s father, the brutal military officer, that his intentions were serious. Initially, the young couple’s relationship was platonic: they went for a walk together and took pictures. When the musician came back to Hollywood, they wrote letters, and Elvis sent albums to his beloved one.

When Presley broke up with Anita, he invited Priscilla to his own mansion. The actress felt like a bird in a gold cage: the man had his own opinion of how his partner should look and behave. The wedding preparations were made secretly; rumors had it the ceremony would not even have taken place if it were not the insistence of Priscilla’s parents and Elvis’s manager.

In 1968, the daughter Lisa Marie was born. The spouses split up four years later; Priscilla left her husband for her coach. The artist confessed in her interviews that living with Elvis was hard: he demanded a lot, and she felt like her husband’s shadow.

When the rock’n’roll king died, the widow worked hard to keep his name in the history of music. She transformed Elvis’s mansion in one of the most popular American museums.

Priscilla never married again. However, she had many men. Apart from the karate instructor, the actor Michael Edwards (John Connor in Terminator 2: Judgment Day) used to be her boyfriend. Presley also dated the Italian screenwriter Marco Garibaldi who became the father of her second child, the son Navarone. The British director and TV producer Nigel Lythgoe famous for Superstars of Dance, Pop Idol, and American Idol spent a couple of years with the woman, too.

Some sources claim that Priscilla used to see the singer Tom Jones: she presumably comforted the old friend after his wife’s death. They had known each other for half a century and decided to use each other’s company.

According to Daily Mail, Presley is one of the celebrities who found the courage to leave the Church of Scientology that reportedly took away her soul and money. The woman joined it after Elvis’s death and spent there almost 40 years.

At the end of 2017, the children’s book Love Me Tender inspired by Elvis’s popular ballad came out. In her People interview, Priscilla talked about her granddaughters Finley and Harper. The woman began to take care about them after a scandal when her only daughter, Lisa Marie, divorced the musician Michael Lockwood after she had found inappropriate pictures of their daughters.

Elvis Presley remains an icon for many music lovers. The new documentary Elvis Presley: The Searcher was released in April 2018. The widow and co-producer shared some details about how the musician’s close people tried to fight his substance abuse. According to the star, it was useless to persuade Presley; those who dared to do that could be just thrown away.