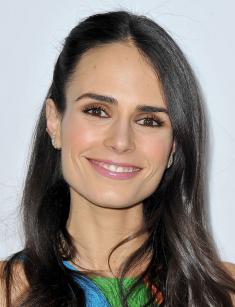 Jordana Brewster is an American actress of Brazilian descent, better known for the Fast and the Furious franchise and several other Hollywood blockbusters.

Jordana was born on April 26, 1980, in Panama, although a few months later, the girl’s family moved to London. Jordana's father, American Alden Brewster, was an investment banker. The daughter inherited sizzling looks and strong character from her mother, Brazilian Maria João, who worked as a professional fashion model at that time.

When the girl was six years old, the family moved from the UK to Maria’s native city of Rio de Janeiro. In Brazil, Jordana's younger sister Isabella Brewster was born. At that time, the future actress made her stage debut, playing her first role in a children's dance show. In England, Jordana learned English, in Brazil - Portuguese.

Four years later, the family moved to America, settling finally in Manhattan, New York City. Jordana studied in prestigious schools there. She first attended the Convent of the Sacred Heart, a Roman Catholic school, then graduated from Professional Children’s School.

While studying at school, the girl participated in amateur performances, played in theatre productions, and she even got the role of Jesus Christ.

Jordana recalled in interviews that she began dreaming of an acting career in her childhood. Her idols were Demi Moore and Debra Winger.

Jordana Brewster made her professional debut at the age of 15. She appeared in the famous 1995 television series All My Children. This soap opera was one of the longest-running projects and served as a springboard to big movies for many young actresses. Jordana was no exception, and later, she played Nikki Munson in the series As the World Turns.

However, the turning point in the biography of the actress was Robert Rodriguez’s 1998 film The Faculty. In this science fiction teen thriller, Jordana cooperated with a lot of stars and future celebrities, including Robert Patrick, Famke Janssen, Salma Hayek, Elijah Wood, and other actors. Then almost the entire cast of the film shot in the commercials for Tommy Hilfiger and the actress received exciting offers.

While filming in series and full-length movies, Jordana did not forget about her studies, because she promised her parents that the shooting would not prevent her from getting a good education. She could not but do it because the whole family was proud of the girl’s grandfather, Kingman Brewster, Jr., who was president of Yale University for several years.

The young actress attended acting classes and entered Yale University, where she successfully graduated in 2003 with a bachelor's degree.

Jordana became really famous while studying at the university. Having stopped filming in television projects for some time, in 2001 Brewster starred in the film adaptation of the acclaimed book The Invisible Circus, alongside Cameron Diaz and Christopher Eccleston.

Then she played a very significant role in her acting career. The young actress could not even imagine that the first part of The Fast and the Furious, where she appeared being a second-year student, would bring not only huge income but also amazing fame for the entire cast.

The girl did not appear in the second and third films of the franchise because she did not want her career interfered with the studies. But Brewster returned to the role of charming Mia Toretto in the remaining parts of the legendary film series about racing drivers.

One could say that Jordana grew up with this film because the first installment was released more than 15 years ago. Over the years, she made good friends with her colleagues on the set. Moreover, Michelle Rodriguez, Vin Diesel and Paul Walker became practically family because they have known each other closely for a long time.

The press spread rumors that Jordana had a love affair with Paul Walker, her on-screen partner, lover, and husband, but they always were only on friendly terms. The young woman was deeply shocked by the tragedy that killed Paul in 2013, depriving her of her close friend and beloved colleague.

The first installment in The Fast and the Furious franchise was followed by other roles. So, in 2001, the actress also starred in the romantic comedy D.E.B.S. with Sara Foster and other actors. In a while, Jordana decided to return to television projects and performed one of the leading roles in the remake of the thriller The Texas Chainsaw Massacre: The Beginning.

When she became famous, Brewster received a lot of exciting offers. In 2009, she was ranked No.9 on Maxim's Hot 100.

Jordana has a beautiful delicate figure, she has repeatedly starred in revealing, but somewhat discreet photo shoots, wearing a bathing suit and underwear, in full-length photo ops, in women's clothing advertising. In May 2013, the new issue of Marie Claire was published, in which Jordana Brewster and Scarlett Johansson appeared as top models promoting the collections of the leading brands.

Now Jordana continues to star in the series, paying attention to big movies.

The personal life of the actress has always been in the spotlight, which is the destiny of all celebrities. However, Jordana Brewster has never hidden her relationship with men, believing that love affairs only contribute to the growth of popularity and recognition as an actress.

So, the woman’s relationship with Mark Wahlberg created a stir. The couple dated for more than two years, there were even rumors that the actress was pregnant, but it was not confirmed.

A few years after the breakup with Mark, Jordana met her future husband, Andrew Form. It happened in 2005 on the set of the thriller The Texas Chainsaw Massacre: The Beginning, which was produced by Form.

In May 2007, Jordana married her lover in the Bahamas, and in 2013, her son Julian was born. The second son of the celebrity couple, Rowan, was born in September 2016. Both children were born via surrogacy.