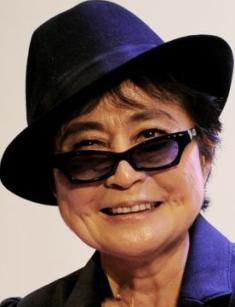 Yoko Ono is an avant-garde artist, singer, writer, and the widow of John Lennon, one of the most popular musicians of the 20th century. She is widely known as a peace activist.

Yoko Ono was born on February 18, 1933, in Japan. The child spent her first three years with her mother, Isoko Ono, in Tokyo; her father, Eisuke, worked in San Francisco as an administrator for the Bank of Tokyo, American branch. Soon, the mother and the daughter moved to the United States had to come back when Eisuke was transferred to the New York office.

The girl showed an interest in art early; three-year-old Yoko attended a musical school. She was educated at the prestigious Gakushuin school and studied music and literature at Sarah Lawrence College in the USA. Young Ono wanted to be an opera singer.

Before Yoko Ono met John Lennon, critics did not appreciate her art. The woman organized weird performances, such as Cut a Piece: the artist sat moveless on the stage floor while people from the audience would go there, one by one, and cut a piece of her clothes. The performance would last until the moment Yoko was naked. The woman gave the show several times; the last one took place in 2003 in Paris when Ono had turned 70.

She did not limit herself in art. In 1964, the woman presented a poetic sketch book Grapefruit that determined further artistic development: she created installations, movies, and performances based on these miniatures.

The meeting with John Lennon changed both of them. Initially, the musician helped Yoko organize exhibitions but soon realized they were destined to be together. However, some fans of The Beatles accused her of the legendary group’s split-up. Paul McCartney emphasized in one of his interviews that Ono was not responsible for that: nobody could inspire Lennon as much as the Japanese woman; if it were not for her influence, the world would never enjoy the hit “Imagine”.

The artist has always been eccentric. Bed-In For Peace was John and Yoko’s most famous act: dozens of journalists gathered together at the Hilton Hotel to see the new artistic movement. It was a peaceful fight against war: Lennon and Yoko were lying in the bed for a week, answered reporters’ questions, and held photo shoots. Thanks to their protest, peacemakers’ mottos appeared on newspaper covers.

Their first work, Two Virgins, turned out to be the most provocative one. According to Lennon, it was recorded within a night. There were no songs there: only noises, screams, moans. The couple’s nude picture was put on the cover.

However, the photo by Annie Leibovitz for the Rolling Stone cover became their most famous portrait: naked Lennon put dressed Yoko Ono in his arms and kissed her. The photo was taken on December 8, 1980, five hours before the man was murdered.

After Lennon’s death, the artist continued to create. She opened a museum in Japan; there is a phone in the middle of the hall that rings sometimes. Thus, any visitor can talk to the artist.

At the age of 23, Yoko Ono married the talented and poor composer Toshi Ichiyanagi against her parents’ will. The young woman wanted to earn the audience’s love and recognition; she often gave performances and exhibitions, but they failed, and critics did not view her as somebody worthy attention. Yoko was depressed and tried to commit suicide several times; however, the husband saved her each time. When Yoko’s parents learned about it, they put their daughter in a mental hospital.

As long as the American producer and Yoko’s big fan Anthony Cox got the news, he went to Japan to support the artist. After the treatment was finished, he took her to New York and began to produce Ono’s projects; she was still married to Ichiyanagi back then. The woman did not think much about it and divorced to marry Cox. The daughter Kyoko was born in this union.

1966 was fateful: she met the member of The Beatles John Lennon at the Indica Gallery where her exhibition was held. John was married to Cynthia, and Yoko was Cox’s wife. Soon, the artist began to seek the musician’s attention.

She could spend hours in front of his house; one day, she managed to get in: Cynthia let her enter the house for a phone call. Later, Ono claimed she had left a ring there, send threatening letters, and demanded money.

In November 1968, John and Cynthia Lennon divorced because of the man’s cheating: Cynthia caught him with Yoko in their family bed.

Soon, Yoko Ono divorced with Anthony. John and Yoko married on March 20, 1969, in Gibraltar. Their son Sean was born in 1975; the father and son had the same birthday, October 9. Sean followed in his parent footsteps and became a musician as well.

Before the boy was born, things were not perfectly smooth for the couple; they even broke up for a year and a half. The spouses moved to New York but could not get a residence permit. While Lennon was ready to return to London, Yoko did not support this idea: her daughter Kyoko lived with her father in the United States, and the mother did not want to separate from the girl.

Soon after Lennon’s death, the artist married an interior designer Sam Havadtoy; they divorced in 2001.

In 2016, 83-year-old Yoko Ono shot for the Рirelli calendar: she was wearing mini-shorts, a short jacket, and a top hat, which made look like a cabaret dancer.

The same year, the artist was hospitalized for suspected blood stroke. Sean Lennon denied the rumors and said his mother had a flue; she was tired and dried.

Yoko Ono often sues companies for using her name and that of John Lennon. In November 2017, she successfully won at the trial against the Hamburg beerhouse “Yoko Mono”; she also had the lemonade name “John Lemon” banned.