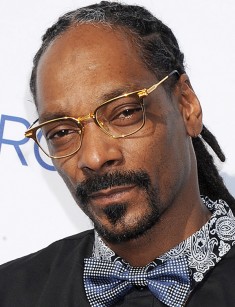 Snoop Dogg is a musician, producer, actor, who became famous in the late 1990s thanks to his debut album and problems with the police.

In his youth, Snoop regularly went to jail. Nowadays, he is a world-famous rapper, successful businessman and exemplary family man.

Calvin Broadus (the real name of the famous rapper) was born in 1971 in the city of Long Beach. The cute dog in the comics Peanuts is the musician’s favorite character. The mother nicknamed him the name of the cartoon hero. The nickname stuck with the boy, and later, it became a music brand.

Snoop has two brothers. The father fought in Vietnam, left the family three months after Calvin’s birth. His grandfather helped the mother to look after the restless boy. When Snoop became famous, he admitted that he could take advantage of the lack of his father's attention. Bitter experience taught the musician not to make such mistakes and helped to become a wonderful father.

Snoop began to sing in the church choir. But this does not mean that the future rapper distinguished himself with a humble and easy temper. Neither parents nor choral singing influenced the unruly teenager. It is not surprising, because Calvin grew up in the crime-ridden neighborhood.

After graduation from school, the future rapper entered college but dropped out of it because he was not diligent enough. Besides, the young man liked adventures, and the street attracted him irresistibly. Romance, freedom, and independence do not belong to the life of law-abiding citizens.

In the late 1980s, Snoop became a member of the Crips gang. The criminal activity had bad consequences. There were several arrests in Calvin’s biography. Perhaps he would have become a criminal boss, but at some point, he stopped, thought about the future and decided to change his life. At that time, Snoop was fond of live music. Soon, the unknown black man met Dr. Dre.

The influential producer listened to the demo tape, then began to promote Calvin. In 1992, the film Deep Cover was released, and Snoop Dogg wrote the soundtrack to it. Two years later, the first album was released. Then the young man with a criminal record became popular. The Chronic is the collaboration of Calvin Broadus and Dr. Dre. The album includes G-funk songs, and Snoop Dogg played a leading role in the development of this musical genre.

The single “Gin & Juice” of the debut album has become a classic hip-hop song. Later, there was an event in the life of the rapper that increased his popularity. The musician was arrested on murder charges. Then it turned out that Philip Woldemariam was shot by Snoop’s bodyguard who did it for purposes of self-defense. The rapper was acquitted of the charges. But this incident was discussed for a long time, the photos of the young singer appeared in the press. Snoop became more and more famous. The idol of African-American youth topped the singles charts for several months.

In 1996, the album dedicated to Tupac was released. Snoop Dogg signed a contract with No Limit Records and his nickname received official status. The rapper recorded three albums with the famous record company.

In 2000, Dr. Dre released the single "The Next Episode," which was included in the second studio album. Snoop and his brother Nate took part in the recording. The latter sings at the end of the composition "Smoke Weed Everyday," and therefore the song is mistakenly called so.

In 2004, Snoop Dogg played in the film Starsky & Hutch. Two years later, he recorded two songs and won the Grammy Award. Snoop did not forget about the past connection with the Crips gang. In 2005, he recorded a single dedicated to the leader of the criminal organization.

Even though he became famous, the rapper did not want to get along with law enforcement authorities. In 2006, Snoop quarreled with the police officers at the airport. It is unknown what made the star angry that day. He tried to enter the first class lounge together with his friends. However, the boisterous group was denied entry. The only thing they came up with was to go to the duty-free shop and break a few bottles of elite alcohol.

The store employees called the police who could stroke the troublemakers down with a great effort. At the same time, they were injured. Snoop went to jail again, but he was not there for a long time. The following day, the rapper was released on bail. There are a lot of obscure facts in this story. Later, the official version about the rowdy singer was criticized. There is a video, confirming that the musician did not take a stand against the police. 10 minutes before the fight, Snoop had a friendly conversation with the children in the lounge.

In 2009, the rapper and musician became so popular that his wax figure was installed in Las Vegas. The same year, he recorded with Timati the single “Groove On.” The composition was first presented in Saint-Tropez.

In 2012, Calvin Broadus took on a new alias. Now he is Snoop Lion. However, fans still call him Snoop Dogg. The singer decided to use a different image after a trip to Jamaica and a conversion to Rastafarianism. Snoop changed the hip-hop and gangsta rap genres for reggae and presented a new hit “JA JA JA."

Snoop created a lot of popular songs with other musicians. For example, there is a song "Wet" also featuring French DJ David Guetta. The track debuted at the top of single international charts of rap music. Another single “Young, Wild & Free” featuring Wiz Khalifa and Bruno Mars was also highly rated and stayed on the Billboard Hot 100 for a long time and received a Grammy Award nomination. Although three musicians recorded the song, Bruno Mars did not participate in the shooting of the video. The rapper often had to perform together with Eminem at concerts. Later, the musician spoke highly of the work of his colleague, calling him "The Great White American Hope."

In the summer of 2014, the video for the song “Pharrel” appeared on the Internet. The track was released as a part of a new album, produced by Pharrell Williams. A year later, two singles were recorded. One of them was entitled “So Many Pros” and was included in the album Bush, which was released in the spring of 2015. Stevie Wonder and other famous Rhythm & Blues representatives participated in the recording. Critics liked Snoop's 13th solo album.

Snoop is a man who always gets in trouble with the law. It is a stage image. In fact, the famous rapper is an exemplary family man. Calvin married Shante Taylor in the mid-1990s. He met her in childhood. Snoop has played basketball from an early age. Perhaps they started relationships thanks to the sport. Shante supported the team, whose member was her future husband. At that time, Snoop was already very tall (his height is 192 cm, and the weight is 85 kg).

In 1994, the rapper became the father of a son, Cordé. Three years later, Cordell was born, and in 1999, they had a daughter, Cori. The girl was diagnosed with lupus erythematosus, a rare autoimmune disease. According to the father, despite the illness, Cori remains a cheerful and lively child. Snoop confessed to journalists that because of the concerts he lacked time to communicate with children, nevertheless, he tried to devote every free minute to his family. Snoop and Shante chose the California city of Claremont as their place of residence.

Later, the singer's wife found her own fashion label “Co Co Ri," which produced designer sportswear. Calvin and Shante Broadus sell online T-shirts and sweatshirts with the logo, Snoop Dogg. The rapper's wife also owns the label "Boss Lady Entertainment." The woman worked as a manager of the rap singer The Lady of Rage.

The famous rapper collects cars and does charity work. Singer attends basketball matches. The musician is a fan of the Los Angeles Lakers, the Pittsburgh Steelers, the Los Angeles Dodgers.

Snoop's family has a lot of talented members. His cousins, who use the stage name RBX, Nate Dogg, Lil’ ½ Dead and Daz Dillinger, Brandy and Ray J., have also become successful hip-hop and R & B performers.

In 2004, Snoop and his wife had relationship problems, but four years later the family reunited. In 2015, the oldest son, musician Cordé, welcomed the first child, Zion.

Snoop loves to experiment with his appearance. At different times, the performer appeared in public with curls, wearing a pink cap or baseball cap, or with a ponytail that was brushed back perfectly. The rapper's favorite hairstyle is dreadlocks, which he always styles in a different way. The musician also has tattoos on the body featuring a portrait of his wife and an image in memory of his colleague and friend Nate Dogg.

In March 2017 there was information about the release of the next album on Snoop's Instagram page. There are more than ten albums in the solo career of the rapper. Dogg also surprised fans with a video for the song "Lavender." In the video, Snoop shot a clown dressed as Donald Trump with a toy gun. The musician remixed the song of the Canadian band BadBadNotGood together with DJ Kaytranada.

Calvin Broadus plays in films, runs a business, goes on concert tours. There are dozens of projects in his filmography. In 2017, the film Grow House was released, where the rapper played a cameo role. Snoop Dogg also participated in the shooting of the film Future World. His name is mentioned in the cast of the comedy The Beach Bum.

In 2018, Snoop Dogg pleased fans with the new EP 220, which songs later were included in the studio album Bible of Love. Judging by the tracks, the veteran rapper became interested in gospel music.

In May, Snoop Dogg received a certificate from the Guinness World Records. The musician prepared a 500-liter glass of cocktail, which he called Paradise. The drink recipe is quite simple because it includes only gin and juice.

In August, on a personal Instagram account, the artist announced a recipe book titled "From Crook to Cook," which will be published in the autumn of 2018. The work will consist of 50 recipes for all occasions, including the musician's favorite drink - Gin & Juice cocktail. 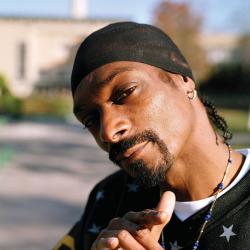