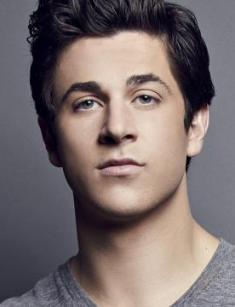 David Henrie is an American actor, who became popular at the age of 13 thanks to the TV show The Pitts. David starred in the popular teen series Wizards of Waverly Place.

The famous American actor David Henrie was born on July 11, 1989. Although the boy was born in California, his family moved to Phoenix when he was young. His mother Linda worked as a manager at that time and his father James Wilson was engaged in the sale of real estate.

David always says that he has Italian roots. The young man has an elder brother, Lorenzo James. The man also works in the field of the cinema. David Henrie was raised in a Christian family since his childhood, so faith takes a significant place in the life of the actor.

David became an adult very early. The boy started working in Hollywood at the age of 10. The first series in the actor's filmography was the series Providence. The American audience watched the adventures of Mark Triedman (David Henrie) for three years from 1999 to 2002. Henrie was invited to shoot in another series called Judging Amy at the same time. The young man got the role of Jeremy.

David goes on the set of the new TV series Without a Trace without delay after the completion of the shooting in the series Providence. The guy turned into Gabe Freedman. David appeared in the sitcom That's So Raven in the role of Larry. Henrie had his first significant work in his career in the series The Pitts in 2003. The young man became the hero of the female audience at the age of 13.

The actor had an episodic role in the famous American TV series NCIS. David Henrie can be called a serial artist. The guy stared in such series as Cold Case, The D.A.

In October 2007, a new series was released by the Walt Disney Company. This series was Wizards of Waverly Place. Henrie got the role of one of the main characters Justin Russo. The series was popular among children and teenagers, so the premiere of the full-length film was in March 2013.

The audience could enjoy the game of their favorite actor in the movie Dadnapped two years later. The movie was not shown on the big screen but the movie was broadcast on American TV. Later, David was invited as a participant in the annual event the Toyota Pro/Celebrity Race.

Internet users appreciated the talent of the young actor. Henrie became a guest star of the online project Easy to Assemble. David's career developed consistently. In 2010, the guy voiced the cartoon The Secret World of Arrietty for the first time. The actor did not want to stop at the achieved, so he began to look for the ways of his self-development. Henrie picked up the camera and started making short films. The result of this work was Boo! and Catch.

In 2013, his fans watched a game of David Henrie in theaters in different countries all over the world. Adam Sandler (Lenny Feder) presented the second part of the film Grown Ups. The actor met with such Hollywood stars as Salma Hayek (Roxanne Feder), Taylor Lautner (Andy), Kevin James (Eric Lamonsoff) on the set.

David was offered to play the main role in the film 1000 to 1: The Cory Weissman Story after his episodic role in the movie Grown Ups 2. The story tells about a basketball player, who had an incredible talent. Many sports experts predicted his success in the future but his disease changed everything. The stroke hit the basketball player's body. Henrie told in the video how the belief in success and the desire to go to the field once again help to defeat any ailments.

David managed to be in the same movie with his elder brother. The guys were invited to the shooting of the dramatic film The Kid. It's a heartbreaking story. This film is about a little boy, whose father went to war. The only thing the child wants his dad to come home safe and sound.

The Walt Disney Company helped David Henrie to achieve his success; therefore, it is not surprising that the actor began shooting a film Dreamer: Inspired By a True Story without any hesitation. This movie tells about the life of the founder of the animation Walt Disney Company before he created Mickey Mouse, it also speaks about how important it is to dream. In 2017, David will present two movies Max & Me and Warrior Road.

The biography of David Henrie is full of a large number of roles but his personal life makes you wonder. Nowadays, the young man is married to the beauty queen Maria Cahill. The official wedding took place in April 2017 but the lovers began to meet 2.5 years before this event.

He had another girl in his life before Maria. She is Lucy Hale, his colleague. They met back in 2008. The romantic relationship grew into a serious affair, which ended after two years. They preferred not to tell about the reasons of their parting.

Henrie did not use to be alone, so he invited the girl to begin dating after his meeting with Elle McLemore. Romantic and energetic David did not use to sit in one place, so he`s bored with the new girlfriend quickly. And the actor stands with another girlfriend on the red carpet.

It was not an aspiring actress or singer but the favorite Hollywood star Selena Gomez. They have known each other for a long time and even managed to play in one series. There was not an official confirmation of the romantic relationship of the former partners but the photos, which were presented on the Internet, showed their love.

David Henrie's career develops. The actor prefers not to tell the press about the upcoming projects. David Henrie has a net worth of $60 million.

Henrie stopped his posting photos from the set on the social network "Instagram" to avoid conversations but the pictures of his friends, relatives and beloved wife appeared on his page.