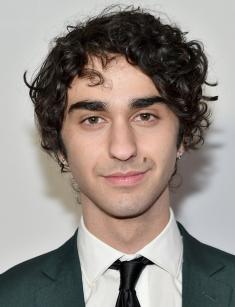 Alex Wolff is an actor and musician, the younger brother of the aspiring Hollywood actor, Nat Wolff. As a child, Alexander wanted to become a doctor; however, the people around him convinced him that acting suited him better, and he hasn't proved them wrong. According to the actor, if an actor paid more attention to the creative part of the job and not to the IMDb ratings, soon he or she would see first good results.

Alex has rather famous relatives. His maternal grandfather, William Henry Draper III, was one of the founders of Silicon Valley, venture capitalist, and civic leader. He is also a nephew of venture capitalist Tim Draper, who invested in the development of Skype and Hotmail.

Alexander's mother, Polly Draper, stages movies and is engaged in acting herself, writes scripts and produces films, she was nominated for an Emmy Award. Polly also speaks German, Portuguese and French. The father of the young actor, Michael Wolff, a jazz pianist and the music manager of The Arsenio Hall Show, composes music for various television shows.

Their mother chose a creative career for her children over a financial one, when she filmed her sons in her debut directorial project, The Naked Brothers Band: The Movie. The film was bought and turned into a successful musical sitcom by Nickelodeon channel.

The motion picture won the audience award for a family feature film at the Hamptons International Film Festival in 2005, Polly received The Writers Guild of America Awards, and Michael and his sons - Broadcast Music Inc. Cable Award. A computer video game was created based on the movie.

The parents decided to finish the shooting when they realized that they were disturbing their children from their studies at a private school in New York. When the broadcast of the series ended, Alex and Nat organized the duet Nat & Alex Wolff and released the album Black Sheep. And overall, the brothers have many things in common, including the Instagram account, as it is evident from its name.

Alex continued his cinematic career, appearing as a cameo in the family comedy film Mr. Troop Mom starring Julia Anderson and in the comedy television drama Monk. Wolff got a small part in the popular television series In Treatment about a psychologist who needs help himself.

In 2011, the comedy film The Sitter about a guy who got expelled from college and had to go back home was added to the filmography of the actor. The guy just can't manage to succeed in any field he tries. In the end, the character goes to work for his neighbor as a babysitter of her three children. But when Noah was going to visit a friend, he did not come up with anything better than to take the little brats with himself, not thinking about the possible consequences.

In 2012, Alex became a screenwriter and producer of the short film The Empty Room. Then, Wolff got a central part in the comedy film HairBrained. The actor played a fourteen-year-old genius, who instead of Harvard enrolled at a third-rate college where he became friends with a 41-year-old freshman. Brendan Fraser performed the role of Wolff's mentor, who was as close to the boy as his father and mother.

Wolff also starred in the television series Red Oaks, directed by David Gordon Green, an Oscar nominee and the holder of The Silver Bear award of the Berlin International Film Festival.

The screenwriter Nia Vardalos invited the young actor to the sequel of the comedy film My Big Fat Greek Wedding. Kirk Jones, who filmed the comedy fantasy movie Nanny McPhee, based on Nurse Matilda books by Christianna Brand, directed the movie.

In the drama film about the 2013 Boston Marathon bombings, Patriots Day, Alex got into the character of the man who was to blame for the tragedy, the terrorist Dzhokhar Tsarnaev.

In 2017, several films with the participation of Alex Wolff were released. In the adventure film Jumanji: Welcome to the Jungle, the actor was playing the role of Spencer Gilpin, the main character who got into the made-up jungle world. The plot revolves around a gang of school friends, each of whom has their own game avatar. The actor's character had the avatar named Dr. Smolder Bravestone, played by Dwayne Johnson.

The biographical thriller film My Friend Dahmer was filmed in the hometown of the serial maniac Jeffrey Dahmer. The film was an attempt to tell the story of the development of the personality of one of the most famous American killers, to unravel the motives behind such terrible crimes. Following the script, Wolff was to get into the character of Dahmer's classmate, John Backderf. In real life, John was an artist. In 2002, he released a graphic novel that later formed the basis of the film's script.

The drama movie The House of Tomorrow is a story about the futurist, designer, and architect Buckminster Fuller. In one of his houses, lives the teenager Sebastian Prendergast, who dreams of creating a punk-rock band together with Jared Whitcomb. Alex Wolff played the part of Jared. The actor's best memory from the set of the film was the closing scene when the central characters performed a punk song together.

When Alex Wolff gives interviews and gets a question about a girlfriend, he immediately asks to move to the next question about movies and TV shows, and not his love life. According to the American press, Wolff is not married, but he has never suffered from loneliness. Even though it is more appropriate to talk about a strong friendship or just a beginning of something romantic because of the back then young age of the guy. At first, Alex Wolff went out with Joelle Ashley, and a year later he was seen in the company of the actress and model Claudia Yuen.

Alex can play the guitar, ukulele, piano, and drums. Besides, he enjoys playing basketball and baseball, and his favorite team is the Los Angeles Lakers, even though he lives in New York. Although the actor regularly appears in movies, he finds it very soothing to watch films as well, according to Wolff, he has seen The Office television series a hundred times. Alex doesn't care about the genre of the movie he chooses to watch because he focuses only on the fact of whether he likes the motion picture or not.

Nat and Alex Wolff are fans of The Beatles, Simon and Garfunkel, Bob Dylan and other folk singers, but they also like Nirvana and The Replacements, The Velvet Underground and The Beach Boys. As the actor puts it:

"We're kind of a cluster of different influences, but on the whole, we like very melodic vibrant music."

Alex Wolff has a net worth of $3 million. At the beginning of 2018, at the Sundance Film Festival, the premiere of the thriller film Hereditary took place, the plot of the movie is devoted to the story of a family, that goes through strange times after the death of the mother. Alex, along with Gabriel Byrne and Toni Collette, played the leading roles in the film.

Alex worked together with his older brother and mother again on the comedy film Stella's Last Weekend. Naturally, Polly Draper performed the role of both the director and screenwriter of the film. However, the main event of the aspiring actor's life is his directorial debut, The Cat and the Moon. Wolff had the first ideas for this deeply personal project back when he was 15 years old, and he worked hard to feel the thoughts and feelings of the protagonist.