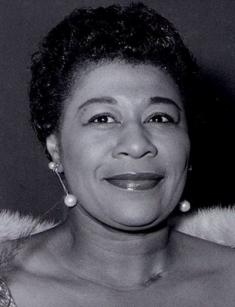 In this singer's lifetime, fans bought 40 million of her records. In half a century, Ella Fitzgerald gave music lovers 90 albums, including solo projects and collaborations with other world stars. In the 1950s, it became a tradition to invite First Lady of Song to concerts in the White House.

Music critics claimed that she broke through all the possible boundaries and could sing the text of a phone book if she wished. Fitzgerald succeeded in something no one had ever done before: she was the first vocalist to improvise the sounds of musical instruments. Ella explained the miracle simply:

"I mentally put myself in the place of the tenor saxophone."

13-time Grammy award winner and the holder of all the most prestigious awards became a legend of world jazz, and her name became a need-to-know basis for music lovers and vocalists.

Lady Ella was born in the spring of 1917 in Newport News, Virginia, the U.S. Ella's parents gave her African-American and Irish blood. William Fitzgerald worked as a driver of a lift-truck. He left his 23-year-old partner, Temperance "Tempie" Henry, who worked as a laundress, soon after the birth of little Ella Jane. To survive, Temperance moved to a more work-friendly Yonkers in the Southeast of New York.

In Yonkers, the woman met an immigrant from Portugal, and after six years, Ella had a half-sister, Frances Da Silva. The religious family attended the service of Methodist church every Sunday. Here Ella sang for the first time, gently repeating gospels after the church choir.

Her mother and stepfather lived from hand to mouth: the money they earned was just enough to buy food and pay rent. But the elder sister grew up as a cheerful child, who tried to see only the bright side of life. Ella Fitzgerald was interested in cinema, music, dancing, and sports. When she was alone, she put on Connee Boswell's records and learned the songs, copying the performance one-to-one. Like all dark-skinned children living on the streets, Ella could dance perfectly and thought that dancing was her future career.

At the age of fourteen, Fitzgerald became an orphan: her mother died of a heart attack. Ella forgot her school studies and soon dropped out of it. Because of the numerous scandals with her stepfather, the girl left home and settled in Harlem with her aunt. But the future Jazz singer never returned to school. To be able to bring money into the house, underage Ella Fitzgerald got a job in a Harlem whore house as a caretaker and saw the other side of life.

Soon social services, as well as the police became interested in the young girl. Ella Jane was taken to an orphanage in the Bronx, where she was soon brought to a boarding school for girls. Freedom-loving Fitzgerald escaped from Hudson Boarding School and found herself on the street: returning to her aunt's house was equivalent to coming back to the boarding school.

Ella Fitzgerald returned to Harlem, where she worked as a dancer in clubs. Fate gave her a chance to escape from poverty: in November 1934, aspiring singers and dancers signed up for a competition of amateurs, which took place on the stage of the Apollo Harlem Theater. Fitzgerald learned the dance and came to the competition, but on the last day before the show, the young actress changed her mind. She learned about the participation of strong rivals and decided to replace her dance performance with a singing one.

For Ella Fitzgerald's performance, she had only one dress, and it didn't look like a stage outfit either. During her first time on stage, the girl was anxious and realized with horror that her voice was gone. The host stopped the performance with a joke, and, encouraging the young girl, gave her a second chance. Ella performed the song "Judy" so brilliantly that the audience was numb with admiration. Fitzgerald won and received an award: $ 25 and an opportunity to work at Apollo for a week.

The creative biography of Ella Fitzgerald developed progressively. The singer took the first step on her path to glory in 1935 when she was accepted into the famous jazz Chick Webb Orchestra. Singer Charlie Linton brought the girl for an audition to Chick Webb himself, who asked Linton to find him a new female performer.

Seeing untidy awkward Ella who had men's shoes on, Chick refused to listen to her. But Linton insisted, and Webb gave in. After listening to the young singer, he signed a contract. That same year, Ella Fitzgerald recorded her debut album with the Webb Orchestra.

Since the summer of 1935, Fitzgerald performed on the Apollo stage and at the Harlem Savoy Dance Hall. Soon the dance hall became famous: the public came to Savoy from all other the town to listen to Ella. Professional musicians were amazed at the singer's sense of rhythm and her light, "dancing" voice.

Soon music critics were praising the pure youthful timbre of Fitzgerald. New albums, which Ella recorded with enviable regularity were instantly sold out. The singer became famous and started receiving invitations from the radio and television.

Benny Goodman welcomed Fitzgerald to his show, and Teddy Hill tried to talk her in singing with his orchestra. But a year later, Ella returned to Webb, remembering that it was because of him that the young unknown Harlem girl turned into a star. Now a person was considered very lucky if he had managed to get a ticket to the singer's concert.

Ella worked with Chick Webb for the last seven years of his life. After the death of the maestro, Fitzgerald started to lead the orchestra, but in 1942 she returned to the stage: the desire to devote all her time to singing took over. By this time, Ella had become a promoted pop singer whose records were sold out like hotcakes. But the girl was only starting on her path to jazz.

The girl listened to the magical singing of Louis Armstrong and successfully copied his voice. Soon Ella Fitzgerald realized that she needed to look for her place in the music industry and not to make covers on other people's songs. The singer learned to improvise and by the mid-1940s, became a different singer, even having changed her appearance. She blurred the line between her voice and a musical instrument.

Fitzgerald's finest hour came in the postwar years when a fashionable Bebop replaced the traditional jazz. Ella's songs "Flying Home" and "Lady Be Good" became masterpieces of jazz art. In 1945, the triumphal world tour of Queen of Jazz began. Soon Fitzgerald recorded the single "All of Me" the hit, which before was performed by Louis Armstrong and Billie Holiday.

Norman Granz, Ella's manager, helped the girl to discover her true jazz potential. He made America and Europe recognize jazz as a form of art, not just a vocal genre. This man played a crucial role in Ella Fitzgerald's life. He took over the household chores of the singer, picked up the repertoire and music, allowing Ella to focus on art and not be distracted by anything else.

Ella Fitzgerald sang the hit song "Summertime" solo as well as together with Armstrong. The single, performed by her, became part of the world jazz art treasury.

Together with Louis Armstrong, the singer released three Studio albums. Two consist of jazz standards and the third is renditions of the songs from the Opera Porgy and Bess by the composer George Gershwin. One of the most extraordinary performances is "I Got Plenty O' Nuttin'."

Ella Fitzgerald was always interested in cinema. In 1955, she managed to star in the movie Pete Kelly's Blues. Director Jack Webb invited the singer to play the role of Maggie Jackson. Critics did not receive the motion picture very well but said that everyone should watch it for the sake of those five minutes when Fitzgerald appeared on the screen.

The 1950s-1960s were the most fruitful years in Ella's career. Colleagues and friends of Ella talked about Fitzgerald's incredible ability to work hard. She was silent only when she was sleeping, the rest of the time she was humming any melody, continually changing the tempo and the timbre.

In the 1960s, millions of dollars appeared on Lady Ella's bank account, but the money lost value: life made sense on stage. Ella Fitzgerald sang until the early 1990s when she lost her health and voice. She last appeared on stage in 1992. The 79-year-old singer spent more than 60 years on stage.

Ella Jane was married twice. She went down the aisle for the first time at the age of 24, at the beginning of the Second World War. The star lived with Benny Kornegay for two years and then realized that they had nothing in common.

Ella Fitzgerald got married for the second time in 1947. Her significant other, Ray Brown, was an African-American musician who played the double bass. This relationship lasted longer but also ended in divorce. The six-year marriage fell apart for one reason: family troubles distracted the singer from the central thing in her life - singing.

But the divorce did not put an end to the couple's relationship, because Fitzgerald and Brown were bound together by Ella's nephew, whom they adopted together. The ex-spouses continued their joint work on stage too. Ray Brown Jr. followed in his stepparents' footsteps and became a famous jazz musician.

In the late 1950s, the newspapers wrote about the third marriage of the First Lady of Song with the musician Thor Einar Larsen, but there was no confirmation of those rumors.

In the mid-1970s, Ella Fitzgerald's health deteriorated: she was diagnosed with diabetes. The singer lost her voice, but she fought bravely, continuing to go on stage.

Blinded by a cataract, Ella Fitzgerald retreated to her Beverly Hills home in a wheelchair.

Her son Ray and granddaughter Alice remained with Ella. Ella Fitzgerald died in 1996. The jazz star who almost lived up to the age of 80, was buried in the California cemetery.

Ella's net worth was estimated at $10 million dollars.