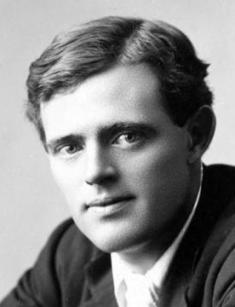 Jack London’s life was full of exciting events and turns: before he became a famous novelist, the man had to overcome many ordeals. Everything is exceptional in his biography, from weird parents to thrilling journeys. Jack London is one of the most-read writers in many countries.

The would-be litterateur was born on January 12, 1876, in San Francisco, California. Some people used to joke that John Griffith Chaney became famous before his birth – the boy’s parents liked to shock the audience.

Jack’s mother, Flora Wellman, came from Ohio; she was the daughter of an influential industrialist Marshall Wellman. The woman moved to California to work as a teacher, but her activities were not limited to music lessons – she was fond of spiritualism and claimed she was mentally connected with an Indian leader. Besides, Flora had frequent nervous breakdowns and mood-swings because she had had typhus at the age of 20.

The esoteric fan met the Irish William Chaney in San Francisco. He was no less peculiar than Wellman – the man was not only good at mathematics and literature but also received much fame as a magic professor and astrologist in the USA. Chaney lived a wanderer’s life and loved sea journeys; he spent 16 hours daily on astrology.

The eccentric couple lived in a common-law union; Flora got pregnant soon. Chaney insisted the woman should have an abortion and provoked a public outcry; local newspapers were actively discussing the situation. Desperate Wellman tried to shoot herself with an old rusty gun, but a bullet only injured her slightly. There is another theory: Flora staged a suicide attempt because her lover was cold to her.

San Francisco journalists speculated on the story; newspapers with articles about the abandoned wife were sold out quickly. Tabloids referred to William’s ex-girlfriend and presented Chaney as a child murderer who had left many wives and even got imprisoned. The besmeared professor deserted from the town. Later, Jack London tried to establish contact with his father, but all the endeavor failed; the man did not read a single book by his son and rejected the fatherhood. Jack London in his childhood

Flora did not have time for the baby – she attended social events. A black babysitter, Jenny Prinster, took care of the would-be writer; he remembered her as a second mother.

Mysterious Wellman continued to earn by spiritualistic seances. In 1876, a war veteran John London asked the woman for help; he had lost his wife and son. John was known as a kind man who brought up two daughters and took any job to support them. The same year, London and Wellman married, and the baby entered John’s family.

The boy’s relationship with his step-father was warm – he became a real parent for the young talent, and Jack never felt like a stranger. Besides, the step-sister Eliza became the best friend for him.

In 1873, an economic crisis pressed the United States; many people were deprived of their jobs and money. The impoverished Londons traveled across the country to find a better life; the writer remembered later that Flora could not obtain anything to eat, and Jack had no idea of having his own toys. He got his first store-bought shirt at eight.

John senior tried to breed cattle, but extravagant Flora did not like it when things were going slowly: she always had bold ideas on how to make a fortune and sometimes bought packs of lottery tickets; her hope for luck was strong. Still, Wellman’s weird wishes often brought the family to the edge of bankruptcy.

Finally, the Londons settled in Auckland, not far from San Francisco; this is where the future writer went to an elementary school. People often nicknamed him “Jack”.

Jack London frequented a library and devoured books. The winner of a local literature prize Ina Coolbrith noticed his passion for books and helped him improve his literary selections.

Every morning, little Jack had to take a sheet of paper and a pen – he wrote about a thousand words daily as a punishment for his silence at choir lessons. However, these activities turned out to be useful later.

London woke up early – he sold a school newspaper in weekdays; weekends were no less busy: he set pins in a bowling alley and cleaned up beer shops in a park to get some money. At the age of 14, he finished elementary school but could not continue his education – there was nothing to pay with.

In 1891, John London got hit by a train and became disabled. Thus, young Jack had no time for studies and got hired at a canning factory; he received a dollar for 10-12 hours of work. It was exhausting; the teenager did not want to become a drudge and quit.

Jack, probably, inherited his mother’s love of adventures. Fed up with his poverty, the 15-year-old young man borrowed $300 from his nanny and bought a used schooner. “Captain Jack” also hired his teenage friends to explore oyster areas; in other words, they stole oysters at a private bay in San Francisco.

The sea wolves sold what they picked up to local restaurants and gained good money; Jack saved $300 for Jenny. However, it was getting more and more troublesome for illegal businesses in California, and Jack had to leave this occupation. Besides, money spoiled the young man: he wasted it on endless drunk parties and regularly participated in fights.

Jack London loved sea adventures and agreed to follow poachers; in 1893, he had his first sea journey to Japan to catch seals. The young man’s impressions were profound; they served as a fundament for the collection Tales of the Fish Patrol. Besides, sea adventures were often present in his further books.

When the job was finished, London had to return to his routine work; a textile and jute factory hired him. In 1894, he participated in a march of the unemployed to Washington. Later, Jack was arrested for vagrancy – it was the crucial moment for the novel The Star Rover.

At the age of 19, London passed the exams and entered the University of California; he had to quit, though, because of the lack of money. Factory workers were paid a dab of cash, and the young man changed many places. Finally, he realized that this lifestyle, full of physical effort and no recognition, was not suitable for him.

London tried himself as a writer when he worked at a jute factory. A working day lasted for 13 hours, and it was necessary to have at least one hour for fun; there was no time for stories back then.

One day, The San Francisco Call organized a competition for writers; the best short story would receive a prize. Flora encouraged her son to try himself – his talent had manifested itself early when the school student created pieces of writing instead of choir lessons. Jack had to be at a factory at 5 a.m.; he would start writing at midnight. Three nights later, “Typhoon off the Coast of Japan” was finished.

London was sleepy and worn-out, but his text won the victory; students of prestigious universities took the second and third places. Thus, the young man began to consider writing as a career; he created several short stories and sent them to the newspaper that awarded him the top position. However, the writer was rejected there.

The young talent’s hopes were broken; he got hired as an unskilled worker at a power station. When his colleague committed suicide because of money issues, Jack realized he could fight.

In 1897, Jack was obsessed with the gold rush and went to Alaska to find the precious metal; he gave up writing and viewed himself as a loser. The writer could not fill pipe – the travel brought nothing but scurvy.

Later, these adventures were described in short stories and novels. As soon as London returned in 1899, his writing career began: the man presented Stories of the North, including “The White Silence”. The next year was marked with The Son of the Wolf; the young writer gave all himself to this text and kept working on it for days. In 1092, London moved to the capital of Great Britain and released The Call of the Wild (1903), White Fang (1906), Martin Eden (1909), Burning Daylight (1910), The Valley of the Moon (1913).

The author himself believed that the 1916 tragic novel The Little Lady of the Big House was his best creation. It was different from other adventurous plots; London wrote it in his last year and reflected his gloomy moods there.

Jack London’s literary life portrayed his personal story. All his characters fight ordeals and overcome obstacles, no matter what happens. For example, the 1907 short story “Love of Life” pictures a man who is betrayed by a friend and begins his long, lonely way. Leg injury and wild animals cannot stop him – he continues to go further. This is just who Jack London was: not every adult can go through what he had to survive as a child.

Jack was a cheerful and funny person; he often smiled. The choice of a lifetime partner was a significant matter for him; he married his deceased friend’s fiancée Bess Maddern in 1900. Two kids were born in this union: the daughters Bessie and Joan.

Nevertheless, the family life was not happy. Four years later, London claimed a divorce. The ex-wife was reflecting on what caused the sudden alienation of affections; she guesstimated it was the reunion with his former lover, Anna Strunsky.

Later, the truth was revealed: London had a romance with Charmian Kittredge, whom he had despised earlier. The woman did not stand out for her beauty or intelligence; people laughed at her sometimes because she was running after men. What made the writer leave his wife and get fond of the plain lover was unknown at first; many love letters were discovered later. Anyway, London was never bored with his new spouse – she also loved traveling and adventures.

The last years of life were not so bright: Jack London had a creative crisis and could not make a new story; literature seemed disgusting to him. Alcohol abuse followed; although the man managed to give up the bad habit, it had a negative effect on his health condition.

The writer had a kidney disease and died of a morphine overdose. Some biographers believe it was intentional, and London killed himself. There is some ground for this theory: the suicide theme can be traced in his last texts. However, no solid evidence is present.

The novel Hearts of Three was published in 1920; it was the last book of Jack London.

“You can’t wait for inspiration. You have to go after it with a club”.

“If you think clearly, you will write clearly; if your thoughts are worthy, so will your writing be worthy”.

“Life that did not yearn toward life was in fair way toward ceasing”.

“Man always gets less than he demands from life”.

“An informed voter is a wise voter”.

“Alcohol tells truth, but its truth is not normal”.

“I would rather be ashes than dust! I would rather that my spark should burn out in a brilliant blaze than it should be stifled by dry-rot”.