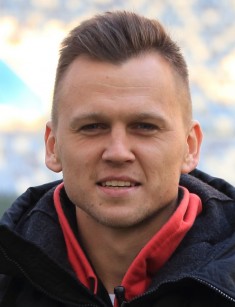 Denis Cheryshev had a significant number of obstacles on his way to the football world. But Denis had successfully overcome these obstacles due to his strong character and persistence. The football player of Russian origin is famous and known far beyond his native country. Cheryshev, thanks to his talent, had got the honor to play in leading Spanish football clubs and the Russian national team.

Denis Dmitriyevich Cheryshev was born on the 26th of December, 1990 in Nizhny Novgorod. Denis has a younger brother Danila. Since early childhood, the boy was sure that he would become a football player in future. His father Dmitri Cheryshev is a famous player of FC Dynamo Moscow. Denis followed in the footsteps of his father and got fond of football.

When Denis was five years old, his father got the offer from Sporting de Gijón. Dmitri accepted this offer and moved to Spain with his family. It turned out to be a real challenge for the kid, in particular, because of the language barrier. Denis had to learn Spanish very quickly.

The boy attended the preparatory school where lessons were also in the Spanish language. By the words of Cheryshev, during first several months, he could hardly understand a word in Spanish. Nevertheless, sometime later the boy got accustomed to new conditions and had learned to speak Spanish fluently, almost as a native citizen.

His father had taken efforts to provide Denis prospective future in football. Sometime after the relocation, the young man began to attend sports school of Sporting F.C., for which his father had played earlier. At that time the best football club of Spain – Real Madrid F.C. became interested in Denis.

During this period, Dmitri Cheryshev left his work without any doubts and dedicated himself to the promotion of his son in football. His father decided to become a football coach. This decision of his father was beneficial for Denis. His father encouraged his son to have confidence in his forces and was always close to him. The young man repeatedly said that he appreciated such actions of his father very much.

The main achievements of Denis Cheryshev came at the time of his participation in the game of youth team of Real Madrid F.C. in 2002. The young man proved himself entirely as a professional: he also got on well with his direction and trainers. He also passed youth stages without any difficulties. While playing in the team of the youth team of Real Madrid F.C., Cheryshev became the champion in the youth league. Denis's achieved one more success, and he was entitled "The Best Shooter of the Tournament."

Than Denis took the next step in his football career - he became a part of Real Madrid Castilla F.C., which is considered to be the second most considerable football club in the country. Having played two seasons for this team, Cheryshev had got significant experience and had developed his skills even more than the public judged from the results of 2 seasons. Alongside his football career, Denis had been studying at the University of Madrid at the specialty as a fitness trainer.

Cheryshev managed to get into the primary structure of Real Madrid F.C. only in 2012. There were no football players of Russian origin in this team before Cheryshev. The young man played as a forward, playing shoulder-to-shoulder with the famous football player Cristiano Ronaldo.

Nevertheless, Real Madrid F.C. during the off-season couldn't guarantee continuous practice to Cheryshev. In that connection, Denis met the management with the intention to leave the club in case of the refusal in-game method. But the chief football coach hadn't let Cheryshev move. During the season of 2015-2016, Real Madrid F.C. with Denis Cheryshev as its part became the winner of the Champions League.

During his work in this team, Cheryshev had played for a year in Sevilla F.C. as a loaned player without the right of the buyout. Here he distinguished with a large number of injuries. It’s not clear, why there were so many injuries during this season. Though, Denis speaks about this period only as about experience and training.

Later, Villarreal F.C. had loaned Denis. I this football club the football player had played only for one season. Next, he continued his career in Valencia football team. The football player said that he had chosen that football club from several variants. Cheryshev had quickly found contact with the players and coaches and also had accustomed to the new city.

Some fans of football didn't support Denis in his transitions from one football club to another. They didn’t understand why Cheryshev wouldn't settle in elite Real Madrid F.C. However, the football player goes his way and opens his talent from different sides in each new team.

Having Spanish citizenship, Denis could play for the national team of this country. But Cheryshev preferred to be a part of the Russian national team because of high competition. He had followed in the footsteps of his father: he began from the participation in junior national team, and later he debuted in youth team in the match against Azerbaijan. Denis had scored his first goal in the game against Poland national team on the 6th of September, 2011. He had scored the second goal precisely a year later.

On the 31st of October, 2012 Cheryshev for the first time became a part of the expanded structure of the primary team of Russian Federation in a friendly match against the USA. The coaches approved Denis Cheryshev as a part of the final group on the 6th of November of the same year. Denis Cheryshev had his debut in the national team on the 14th of November, 2012, at the 80th minute of the match. It's worth mentioning one fact: Dmitri Cheryshev, the father of the football player, also had his debut during the game with the USA.

The journalists are often interested whether Denis regrets his choice of the national team. Cheryshev confidently answers such questions that he is proud of his nationality. The football player repeatedly tells that when he hears the anthem of the Russian Federation, he began to shiver.

Denis Cheryshev is popular both in Spain and in Russia. Nevertheless, he is still a bachelor. The football player enters the rating of 10 most desired Russian bachelors in the sport. Denis received such status not only because of his game in the midfield. The girls appreciated the determination and European mentality of the man.

Talking about his preferences, in one of his interviews Cheryshev mentioned that he more often paid attention at the girls' eyes if talking about the appearance.

Not each girl can become a good party to Cheryshev. That’s because the football player of such high level will give preference to his career. Possibly, this is the reason why Denis is not married. It is possible that after all Cheryshev has a beloved, but he keeps his personal life and relations in secret.

The football player continually publishes photos with the same girl on his Instagram page. Denis hadn't given any official comments towards his relations. Denis spends a lot of his free time in a company of his friends. Due to Cheryshev's confessions, popularity doesn't bring him any joy.

In 2016 the preparation for UEFA European Championship was well under way, but Cheryshev’s participation turned out to be questionable. The football player had an operation after the hip injury. Cheryshev couldn't avoid medical intervention because the doctors diagnosed him with a severe illness – chronic hip tendinitis. He had had a successful operation, and after four months of rehabilitation Denis had to return to Valencia F.C. Though, the football player was absent at UEFA European Championship 2016 because of his trauma.

On the 16th of June, 2016 Cheryshev concluded the contract with Villarreal F.C. for five years. The football player doesn't disclose his salary. During the season of 2016-2017 he held 18 games for the team, and in the following season of 2017-2018 – he had played in 21 matches and had scored three goals.

The football player became a part of the expanded application for the house match at FIFA World Cup in Russia. Denis has recently admitted that he worries whether he gets into the final structure of the national team of Russian Federation. The football player told that they had been watching videos of their rivals, and every one of them understood that that team was competitive. Denis admitted that the football players would prepare to do their best during the game. Cheryshev trains on his position, on the left flank. Statistics of Denis is impressing. He had scored 35 goals for his career.

The football player said more than once that 17 was his favorite number, but it wasn't possible for him to play under this number anyway. At present, Denis Cheryshev has hundreds of thousands of subscribers on Instagram where the football player regularly posts photos and videos from his life.

On the 14th of June, 2018, the opening match of FIFA World Cup had taken place. Denis Cheryshev replaced the injured Alan Dzagoev. After two unsuccessful blows Cheryshev "apologized" to fans with a great goal. His goal became the second during the match after Yury Gazinsky’s ball heading. At 90th minute of the game, Cheryshev again scored a goal to the gate of Saudi Arabia again. His second goal can be considered one of the most impressive during the tournament. 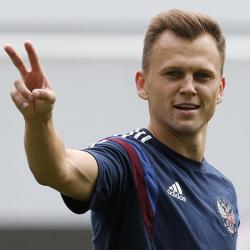