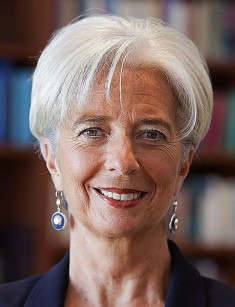 Christine Lagarde in her youthChristine Madeleine Odette Lagarde is a French politician and stateswoman, a member of the Cabinet Minister of France (2005-2011), Director and Chair of the International Monetary Fund (since 2011). Christine was born in Paris on the 1st of January, 1956. She descended from the family of French aristocrats Robert and Nicole Lallouette. In her family her three brothers Luke, Rémy and Olivier were also brought up. Her father who was a professor of English and Literature at Rouen University sticked to severe looks on the upbringing and education. Since childhood Christine had acquired good manners and rules of etiquette.

Except for English language, Christine Lagarde had learned Greek, Spanish and Latin languages at Lycée Claude Monet of Le Havre. She also practiced synchronized swimming and was a part of youth team. At the age of 15, she became the bronze medalist of the championship of France. She also was the leader of the Scout troop. Christine’s younger brother Olivier Lallouette became the famous opera singer.

In 1973 Robert had suddenly died, and Christine’s mother Nicole, who was a school teacher of French and Latin had to take care of children on her own. The same year Christine had won an American Field Service grant and went to the U.S. on the system of exchange of school students. The girl had studied for a year in Holton-Arms School in Maryland. Christine became the devotee of globalization ideas when she had found herself in the new country and unusual conditions.

The Frenchwoman had at once got a job of the assistant in the office of the congressman William Cohen from the Republican Party. As a part of judicial committee of the Watergate process the girl carried out the duties of the interpreter for French-speaking participants. When Christine returned to her native country, she entered Paris West University Nanterre La Défense on Law Department. The girl began to study political science at Aix-en-Provence Institute of Political Studies where she received the Master's degree in1981. Later Christine would return to this institute as the board member of this higher education institution.

The political biography of the future director of the IMF was developing progressively. In 1981 Christine handled major labor cases at the international judicial Baker & McKenzie company which main office is located in Chicago. The corporate affiliates function in 35 countries all around the world and there are about 2,5 thousand employees.

In 1995 besides her major employment as a lawyer she began to work at Global Strategic Committee where Zbigniew Brzezinski became her colleague. In 2000 Christine Lagarde was honored with the highest distinction at her homeland – the cavalier of the Legion of Honour. In 2002 Lagarde took the 5th position in the rating of the most successful women of Europe according to "Wall Street Journal Europe" edition. In 2004 Christine was entrusted with the management of Global Strategic Committee of Baker & McKenzie lawyer office.

In 2005 Christine Lagarde received an offer from the French Prime Minister Jean-Pierre Raffarin which she could hardly refuse. Soon, the lawyer with a world name took the position of the Ministry of Foreign Trade of the Fifth Republic. Two years later Lagarde occupied the post of the head of the Ministry of Agriculture and Fisheries of France, and in a year Christine headed the Ministry of Economy, Finance and Industry.

In 2008 Christine started the management of ECOFIN EU Ministry. Since 2008 Lagarde was elected for three-year term as deputy on local council from the 12th district of Paris. In 2009 Lagarde was entitled the best Minister of Finance of the European Union according to the "Financial Times" edition.

In 2011 Christine Lagarde was elected as Managing Director and Chair of the International Monetary Fund, a particular branch of the UN which is authorized to provide medium-term loans to the States. The Supervisory Council controls the organization, the majority of its participants are the citizens of the USA. In 2011 according to "Forbes" version, Christine took the 9th position in the list of the most influential women of the world.

By 2014 the politician achieved the 5th in the top rating, but by 2016 her position fell to the 6th line. In 2015 Christine Lagarde was accused of criminal waste of financial resources and corruption. In a short time, the investigation into the businessman Bernard Tapie was closed because of the absence of charges on the part of Prosecutor General's Office of France.

In the early eighties, Christine Lallouette got married to Wilfred Lagarde and changed her surname. In 1986 and 1988 she gave birth to their sons – Thomas Lagarde and Pierre-Henri Lagarde. Her children live in France. Now the elder brother is engaged in architecture, and the younger had learned as a software engineer. Ten years later after the wedding, Christine and Wilfred separated.

The businessman Eachran Gilmour became the second husband of Christine. But they also broke up in a short time.

In 2006 occupying the post of Minister of France, Lagarde met the Marseille businessman Xavier Giocanti at one of the secular events. In her youth she had had romantic relationship with this man.

Their feelings had inflamed with a vengeance, and soon the journalists began to notice the couple in love in the opera and at art exhibitions. Christine and Xavier don't live together constantly, but they daily call each other and discuss current affairs. Christine is a strict vegetarian, she doesn't drink alcohol, practices yoga and she is engaged in the cultivation of flowers. Lagarde goes to gym and plays tennis.

Christine is in good shape. With a height of 182 cm Lagarde has normal weight what is proved by her photos. Christine prefers elegant official style of clothes. She chooses lady-type pantsuits or ladies' two-piece from Chanel, Ventilo and Austin Reed brands.

Christine prefers Hermes bags and accessories. Pearls and colorful bright scarves are Christine’s favorite accessories. You can often notice an original brooch on Lagarde’s jacket lapels. Christine prefers to appear in magnificent evening gowns at secular parties, and she chooses casual chic style in her daily life. Christine doesn't dye her hair. From the moment of taking the office of the Managing Director of IMF the politician changed her hairstyle in style of the character of Miranda Priestly from the movie "The Devil Wears Prada". This character was brilliantly performed by Meryl Streep.

In 2016 the Supervisory Council of International Monetary Fund voted for the renewal of the terms of Christine Lagarde which would last till 2021. At present Christine Lagarde negotiates with the government of Ukraine concerning reforming the State to which since 2015 the IMF had transferred four tranches amounting to $8,7 billion.

The government of the USA made the last transfer of funds for $1 billion at the beginning of April 2017. During their meeting which took place on the 21st of June, 2017 Lagarde and Petro Poroshenko discussed the pension reform, the course of privatization and strengthening of anti-corruption measures in Ukraine. 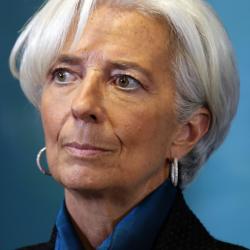