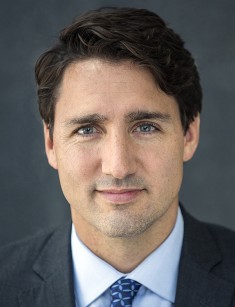 Justin Trudeau is the youngest after Joe Clark prime minister of Canada and the head of the Liberal Party of Canada. He is known for his liberal-humanistic views, unusual behavior and charming appearance. Justin's father Pierre Trudeau is the fifteenth prime minister of Canada (1968 to 1979). People call Pierre the "father of modern Canada" because he made Canada independent of the UK.

Thus, Justin was familiar with politics from childhood. Trudeau was not even a year when the President of the United States, Nixon, said at the National Arts Center:

"I'd like to toast the future prime minister of Canada, to Justin Pierre Trudeau."

His words were prophetic. Nevertheless, no one saw Justin as a politician until his father died in 2000. At the funeral, the future Prime Minister made a speech, which will then be called one of the most significant Canadian events from the past fifty years. Justin won the hearts of Canadians and since then began to build his political career.

The Prime Minister is very educated. After graduating from high school, Justin entered the baccalaureate at McGill University, where he studied English Literature. Justin Trudeau also has a bachelor of education degree from the University of British Columbia. In 2002, he entered the Polytechnic School of Montreal, where he studied engineering. From 2005 to 2006, Justin Trudeau continued his education at McGill University and received a master's degree in environmental geography.

Before a political career, Justin for a long time taught French and mathematics, worked on radio and even starred in the historical series "The Great War," which describes the role of Canada in the First World War. Justin Trudeau is a passionate fighter for the preservation of the environment. In 2005, he fought against a proposed $100-million zinc mine. The mining of metal would damage the South Nahanni River, a UNESCO World Heritage Site. Justin could not allow this.

In 2013, Trudeau Jr. headed the Liberal Party of Canada. The charming politician received more than 80% of the votes in the elections. Under his leadership, the Liberal Party became more popular than Democratic and Conservative. On October 19, 2015, Justin Trudeau was elected Prime Minister of Canada. At the same time, he became Minister of Intergovernmental Affairs and Youth.

In the first days of his inauguration, Justin Trudeau fulfilled his pre-election promise: he stopped Ottawa's military operations in the Middle East.

Instead of bombing the Islamic State, the Prime Minister offered to train the Iraqi army to confront the ISIS.

"Canada, for example, can offer the transportation of strategic cargo, training of soldiers, medical and humanitarian support," said Trudeau.

Even before the elections, Justin Trudeau expressed peacekeeping views.

The Prime Minister of Canada is famous for his devotion to the ideas of humanism and liberalism. Justin actively supports the LGBT community: stands for the abolition of the ban for homosexuals to become donors, participates in gay parades. At one of the last, he performed on stage with Lady Gaga with the song Born This Way.

Trudeau insists on including a provision on gender identity in the Human Rights Act and the addition to the Criminal Code of Canada of an item on "hate crimes." Also, the politician is a convinced feminist and supporter of the woman's right to abortion.

"It's not up to the government to decide what a woman should do with her body. That's all. Point", - the prime minister expresses his point of view.

In the cabinet under the rule of Trudeau for the first time in the history of the country an equal number of men and women. And they are representatives of different nations.

Popularity on the Internet

Charismatic appearance, the liberal policy and cute behavior of the Prime Minister of Canada made him an Internet star. Trudeau has a whole collection of socks in cheerful colors, in which he likes to appear at important events and social events. At the meeting with Angela Merkel, the politician appeared in pink socks with the emblem of NATO and met Ireland's Prime Minister Enda Kenny in the socks with the Star Wars symbolism.

Justin Trudeau is famous for his ability to fascinate people. On the Internet there is a whole collection of photos, where celebrities, presidents look at him with adoration. Among them are Donald Trump, his daughter Ivanka, the actress Emma Watson, Kate Middleton, French President Emmanuel Macron and even Queen Elizabeth II.

Justin's body also causes admiration. In 2012, Trudeau fought in the ring with Conservative Party senator Patrick Brazeau. And he won. The reason for the fight was not cruelty or the desire to show who is stronger. In his style, Trudeau once again fought for people. The tournament was charitable and was organized to support of cancer research.

Justin Trudeau's wife is a former model, radio and TV presenter Sophie Grégoire. They know each other childhood: Sophie is a classmate of Justin’s brother. After school, they didn’t see each other for some time but again met at a charity ball many years later. Now they have three children: Ella-Grace Margaret Trudeau, Hadrien Trudeau, Xavier James.

Justin Trudeau has two brothers - Alexandre and Michel. Michel killed by an avalanche. After the death, the Trudeau family made a campaign in 2000 for safety on the ski slopes.

1.4 million people follow the Prime Minister's Instagram. He is the favorite of women and men of all ages. But only on the Internet. At home, Trudeau's rating is falling rapidly. In 2016, 58% of Canadians supported the Prime Minister, and in 2017 only 42%. 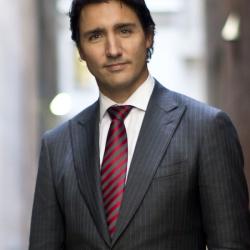